We've reported on the rather slow sales of the Nintendo Wii U, but the cause of these slow sales has been a bit more elusive. Nintendo apparently thinks they know why sales are slow and are attempting to fix the problem...by sending out a message to all Internet-connected Wii consoles. 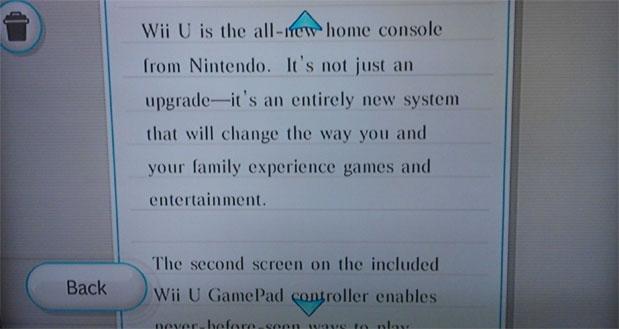 Did you know that you can play nearly all your existing Wii games on Wii U? Your Wii controllers and many Wii accessories can also be used with a new Wii U console -- along with any downloaded games, save data, and other info stored in your existing Wii console.

It's time to discover Wii U

Wii U is the all-new home console from Nintendo. It's not just an upgrade -- it's an entirely new system that will change the way you and your family experience games and entertainment.

The second screen on the included Wii U GamePad controller enables never-before-seen ways to play games and enjoy TV. And for the first time ever, you can see Mario and your favorite Nintendo franchises in glorious HD.

Learn more about Wii U at Nintendo.com/WiiU

Apparently Nintendo believes that Wii owners think the Wii U is just a Wii with a GamePad. We obviously know the difference, but for the less technically inclined, I can see where the problem may be. For instance, they have extremely similar names. However, whether or not this message will help clear up confusion and drive Wii U sales remains to be seen.