Scientists have created a real-life 'tractor beam' which uses light to attract objects according to research published by Nature Photonics and led by the University of St Andrews. The researchers' hopes are it could eventually lead to medical applications where it would target and attract individual cells. 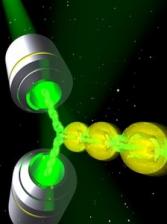 To us mere mortals, a tractor beam is usually thought of along side Star Trek, where the beam was used to move much bigger objects. Back in 2011, researchers out of China and Hong Kong showed how it could've been done with laser beams of a specific shape, and we've also had NASA funding a study which looked into how the technique might be used to manipulate samples in space.

The new study lead researcher, Dr Tomas Cizmar, research fellow in the School of Medicine at the University of St Andrews, said while the technique is new, it has huge potential. He continues:

The practical applications could be very great, very exciting. The tractor beam is very selective in the properties of the particles it acts on, so you could pick up specific particles in a mixture. Eventually this could be used to separate white blood cells, for example.

Normally, when microscopic objects are hit by a beam of light, they are forced along the direction of the beam by the light photons. That radiation force was first identified by Johannes Kepler, a German astrologer all the way back in 1619 when he observed that tails of comets always point away from the Sun.

Dr Cizmar's team's technique paves the way for that force to be reversed, which he said some people might find counter-intuitive. He elaborates with "It's surprising. Only when we looked in detail at the process did we see the reversal. It's quite a narrow field it occurs at".