Apple are still seeding out OS X 10.8.1 to developers, where they'll hopefully address some of the bigger issues with the initial release of Apple's latest OS, Mountain Lion. But, it looks as though some users have received notifications telling them that Apple are preparing to seed builds of OS X 10.8.2 for testing. 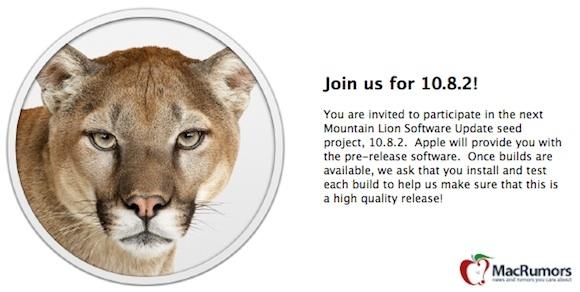 You are invited to participate in the next Mountain Lion Software Update seed project, 10.8.2. Apple will provide you with the pre-release software. Once builds are available, we ask that you install and test each build to help us make sure that this is a high quality release!

Apple seem to be moving pretty quick from OS X 10.8.1 to OS X 10.8.2, meaning that they're looking to clamp down on issues found not only in the original OS X Mountain Lion release, but 10.8.1. The issues in the OS X 10.8.1 are probably not that big to begin with, but it's good to see Apple moving quickly with updates.

Have you moved over to OS X Mountain Lion? I personally haven't bothered, there's no stand-out features that make me want to take the dive to the new OS. If I owned an iPhone, and synced it a lot, then maybe. But I don't even sync my iPad, so I haven't wanted to upgrade.