I'm sure you've all been walking down the street texting or playing a game on your phone and walked into someone or something. I know I have and I know I'm not alone. According to the Associated Press, the number of citizens walking into poles, ditches, on-coming cars, and each other while using electronic devices has 'quadrupled.'

The internet has nearly as many bloopers of this as it does cat videos, including the one above of a man walking into a black bear while texting. While it's hilarious to watch, it's most certainly a serious problem and is implicated in the 4.2% rise in pedestrian fatalities in 2010. Some states are even trying to outlaw distracted walking.

A whopping 1,152 people went to the emergency room last year, according to the Consumer Product Safety Commission. Some highlights of the sad and hilarious stories:

Trying to bring light to the situation, Philadelphia officials painted an "e-lane" for texting pedestrians on April Fools. They weren't ready for the ironic popularity: "The sad part is we had people who, once they realized we were going to take the e-lane away, got mad because they thought it was really helpful to not have people get in their way while they were walking and texting," said Rina Cutler, deputy mayor for transportation. 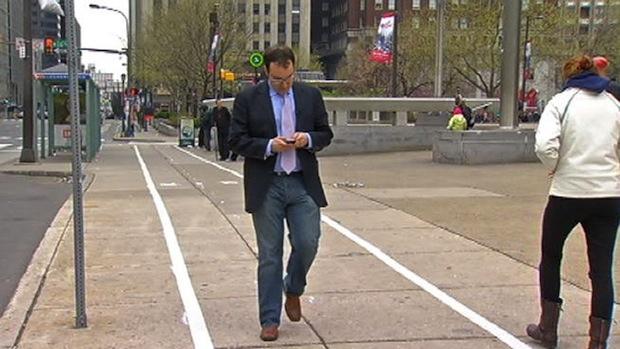