Have you ever noticed that the views on a newly viral YouTube video seemingly pause at 301? If so, I imagine you've wondered why that is. Well, previously it had just been one of those many internet myths that seemingly don't have an answer. However, thanks to YouTube product manager Ted Hamilton, we now have an answer. 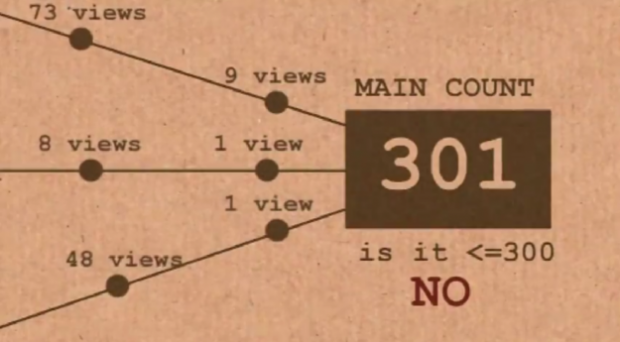 The basic reason behind the views freezing at 301 is the following: Once a video hits 300 views, subsequent views are collected and sent to YouTube's central servers for verification. This verification process takes about one-half day to a day and checks that the views weren't racked up by a bot. Mr. Hamilton explains:

Views, as mentioned, are a currency. When you have a video with very small amount of views you don't need to be too careful about what the view was. However, once it gets to be above 300 and beyond, this currency, we really need to verify and make sure that the number is what it purports to be. So this means that we have to go through a statistical verification process. And that statistical verification process actually takes some time. And thus we go from incrementing one by one, to then saying, OK, now we're incrementing in batch. And all of these views we're adding on have been verified by YouTube to be real views. We are preventing things like bots to go in and add a bunch of views to a video.

Why 300? No, it's not a reference to the movie. Instead, it is just an arbitrary number used by the YouTube engineers set as the cutoff. The code uses less than or equal to 300 to allow counting before verification. Because of this, it allows one extra view to slip in before the verification process kicks in. One mystery down, plenty more to solve.