IDF 2011 - Gigabyte have shown off their high-end X79-based motherboards at IDF, with the following models on show: GA-X79-UD5, GA-X79-UD7 and the G1.Assassin 2. There is a difference between the UD5 and UD7 this time round, though. Usually the UD7 is jut a beefed-up UD5 with added features and better cooling. This time the two boards are totally different from the PCB to the features they offer. 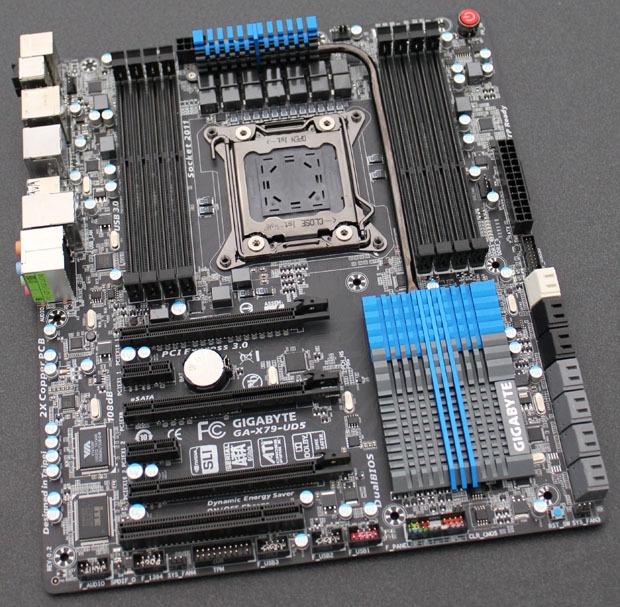 The GA-X79-UD7 is a fusion between the traditional high-end connectivity and features of the UD7 and the new "Gigabyte OC" line the company released with the X58A-OC motherboard. It keeps the cool looking black and orange scheme. Hardware wise we see four DDR3 DIMM slots that can take 32GB of quad-channel memory, 22-phase CPU VRM which overclockers should be quite happy about. PCI-e 3.0 x16 (x16/NC/x16/NC or x8/x8/x8/x8), 14 (!!) SATA ports and high-grade connectivity. The board draws power from not only the 24-pin ATX connector, but two 8-pin EPS connectors.

Last we have the G1.Assassin 2 which features just four DDR3 DIMM slots - something that Gigabyte have done to keep room on the board for more features. First up we have a Bigfoot Killer NIC PCI-Express hardware-accelerated network controller, a Creative Sound Blaster X-Fi hardware-accelerated audio processor (CA-20K2) with its own set of audiophile-grade capacitors to the OPAMP circuit. Lastly it features three PCI-e 3.0 slots (x16/NC/x16 or x16/x8/x8), 12 SATA ports and a bunch of other connectivity.