Dino from GIGABYTE Australia was on hand to introduce three new boards, but kind of got a little shy when it came to the third and very new board. We got a look at their new AMD 990FX motherboard that was released today that finally brings all the big GIGABYTE features to the AMD platform in the flavor of the UD7.

Next up we also got a look at the Z68-Gaming motherboard. You might remember the previous range of gaming series motherboards from GIGABYTE based on the P65 chipset. The word was that if that range was successful and sold well, the gaming series would continue. Obviously it was a successful move by GIGABYTE to focus more on gamers and sales must have been good as we get the new Intel Z68 chipset with gaming mobo treatment from the Taiwanese mobo maker. 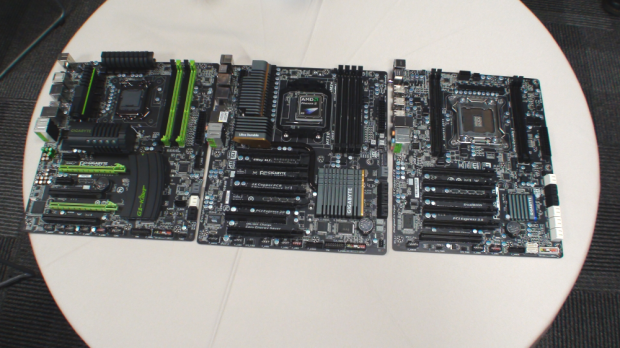 And finally and probably the one board that most are excited about, the upcoming Intel X79. Intel all of a sudden allowed motherboard markers to display dummy samples of their upcoming X79 mobos - of course on the same day as AMD released its new flagship chipset, the 990FX. X79 will take over from the X58 chipset and add in some nifty features such as quad-channel DDR3 memory, a truck load of SATA ports and a new 2011 pin socket to support the upcoming range of processors from Intel.

Watch the video above for a good rundown on the three handpicked motherboards we decided deserved a spotlight here.