All NewsBusiness, Financial & LegalCases, Cooling & PSUContests & GiveawaysCPU, APU & ChipsetsDealsDisplays & ProjectorsGamingMotherboardsScience, Space & RoboticsStorageVideo Cards & GPUsVirtual & Augmented Reality
All ReviewsAll ArticlesAudio, Sound & SpeakersCases, Cooling & PSUCPUs, Chipsets & SoCsComputer SystemsDisplays & ProjectorsGamingMotherboardsNetworkingPeripheralsRAMStorageVideo Cards & GPUs
GuidesGamingAsk the ExpertsNewsletterAboutForums
AMD Zen 4Intel ArcRTX 3090 TiRTX 4090RTX 4080Diablo 2GTA 6Elon MuskHDMI 2.1
TRENDING NOW: Meta's most advanced AI chatbot goes after its own CEO Mark Zuckerberg
Cases, Cooling & PSU
COMPUTEX Taipei 2011 - We saw an early glimpse of it earlier in the year at CES in Las Vegas, but today we stopped by the Corsair suite to get a detailed look at its upcoming Link control software which allows you to take control of what is going on inside your system.

In the video above you get to see a look at the software that is still in beta, but is getting close to being released. Corsair Link works with a USB control unit that slots into one of your drive bays and your fans and other devices such as lighting plugs into it.

It not only allows you to monitor temperatures, but also adjust fan speeds. So, right now you are saying you can control fan speeds now, but Corsair Link takes things quite a way further. For instance, if you have a light kit installed, you can adjust the lights to change depending on the GPU temperature, for instance. 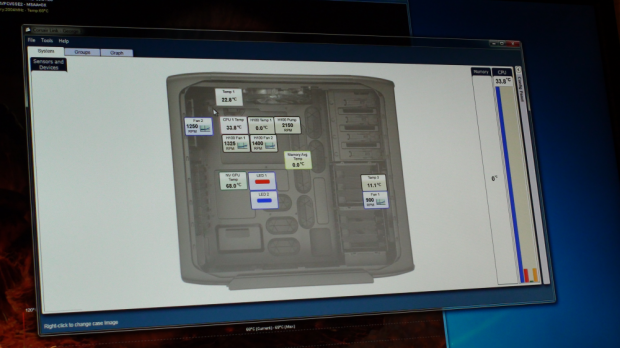 The software is actually very programmable so you can tweak around with it to your fancy and really see what is going on with your system vital signs. If you don't want to spend time tweaking with the software, we were told there would also be basic preset options you can chose for a quiet system or high performance with your fans running at full speed.