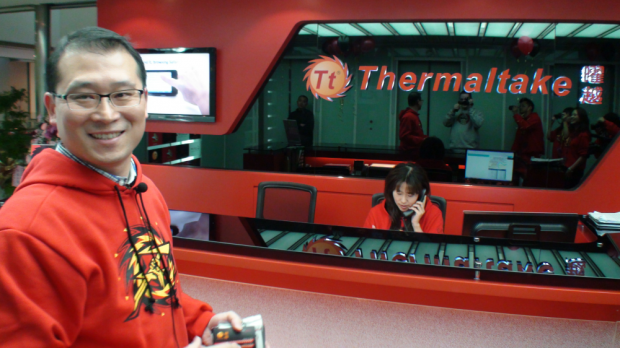 Kenny Lin kicked things off with a short press conference discussing the new office and the reasons behind the investment - or so I think... it was all in Chinese. Judging by our visit today, Thermaltake has clearly invested a lot of money into its new office space, which is located in an expensive industrial area of Taipei that is home to big fish like NVIDIA, Foxconn and ECS. The new office is vibrant, follows the red and black theme colors of Thermaltake. No expenses have been spared with all the trimmings in place.

Included are such things as various Sony TV's hooked up with Nintendo Wii's for staff to take a break and get some prospective on things. Staff have various comfortable couches and bars located all around the offices to sit back, relax and discuss ideas and matters. Ceiling hung "moon air chairs" as I call them include a stunning view over Taipei and give staff another chance to get away from their typically mundane office chair. Every staff member got a Thermaltake eSPORTS keyboard and mouse and their office chairs even look comfortable, too.

All these make for a really modern, work inspiring and relaxing space to work, but there is a reason behind all of this new office space goodness. Thermaltake was in an old building previously, but the change to this new building is not just about having one of the top tech offices in Taipei, it is about a big overall change at Thermaltake and the new office helps reinforce that. Along with the new building comes a refreshes mentality including eight new core values as discussed by CEO Kenny Lin in the video above including: Logical Approach, Continuous Innovation, Global Thinking, Honesty & Integrity, Collective Wisdom, Learning Culture, Adding Value and Encouraging Initiative.

I would like to thank Kenny Lin for his time today showing us around his new offices. Sadly something happened to the audio for the last section of our tour and we had to cut out some of the video. We did include about two minutes of video without audio as I felt it was important that was still included. Sorry!