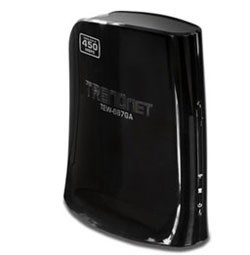 The adapter promises blazing fast 802.11n wireless speeds and Trendnet says that it will break the 150Mbps perforce barrier and in testing the adapter has reached 200Mbps bursts transmissions. The adapter has MIMO technology integrated with three spatial streams per antenna for more bandwidth and better connectivity.

The adapter has a Gigabit wired Ethernet port and supports Wi-Fi Protected Setup for easy construction for secure networks and more. The adapter works best when paired with the Trendnet TEW-691GR router, but it should work with any brand router. The adapter will ship this month for $149.99.

"TRENDnet was ecstatic to be able to deliver the first ever 450Mbps wireless n router to market in early June of last year, followed by the first ever 450Mbps access point last month," stated Pei Huang, President and CEO of TRENDnet. "The fact that we are also on pace to launch the very first 450Mbps wireless n adapter is yet another signal of TRENDnet's ability to innovate in the wireless networking space."
NEWS SOURCE:trendnet.com