NewsReviewsArticlesGuidesGamingAsk the ExpertsNewsletterForums
GIVEAWAY: Sabrent Rocket Q 8TB NVMe PCIe M.2 SSD worth $2000!
Storage
Sharkoon reminds me a lot of Brando with all sorts of USB offerings. Rather than weird USB gadgets, Sharkoon tends to concentrate on making some really cool docking station that connect to your Pc via USB and allow you to use your old desktop and laptop hard drives as external storage. The docking stations are a great way to be able to use your old HDDs without having to buy up a bunch of external enclosures. 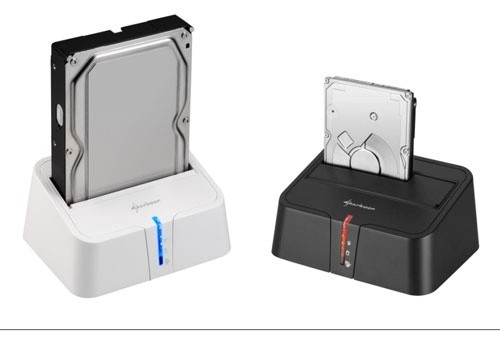 Sharkoon has announced a redesign of its QuickPort HDD docking station called the SATA QuickPort XT. The redesign offers the dock for the first time with black or white colors and you can get the thing in USB 3.0 as well. The drive also gains a cool backup feature that can backup your machine with the touch of a button.

The single click backup feature is software driven and included on a CD and must be installed to a Windows XP, Vista or 7 computers. The front of the docking station has a LED that glows when the drive is active. The dock ships with a power supply and has an on/off switch as well. The are now five versions of docking station with a USB2.0/eSATA version, USB 3.0 kit that also includes a USB 3.0 host card that fits into a PCIe slot.
NEWS SOURCE:sharkoon.com