All NewsBusiness, Financial & LegalCases, Cooling & PSUContests & GiveawaysCPU, APU & ChipsetsDealsDisplays & ProjectorsGamingMotherboardsScience, Space & RoboticsStorageVideo CardsVirtual & Augmented Reality
All ReviewsAll ArticlesAudio, Sound & SpeakersCases, Cooling & PSUCPUs, Chipsets & SoCsComputer SystemsDisplays & ProjectorsGamingMotherboardsNetworkingPeripheralsStorageVideo Cards
GuidesGamingAsk the ExpertsNewsletterAboutForums
RTX 4090Windows 11Halo InfiniteBattlefield 2042Elon MuskGTA 6RTX 3080HDMI 2.1
RAM
When it comes time to build up a new gaming PC most of us want something that performs really well. We also tend to want the machine to look good and with many of the cool computer cases on the market today have clear side windows the way the hardware inside the machine looks is as important as how the case looks on the outside. 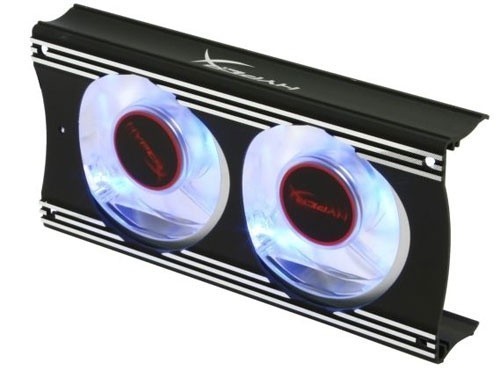 The black fan is a standalone product that sells for $23 and is part number KHX-FAN-B. The fan has a pair of 60mm fans that help to cool memory allowing you to overclock to higher speeds before the RAM gets unstable. The fans also have eight blue LEDs that glow when the fans are on. Noise output is minimal with 25dBA when operating.
NEWS SOURCE:kingston.com