All NewsBusiness, Financial & LegalCases, Cooling & PSUContests & GiveawaysCPU, APU & ChipsetsDealsDisplays & ProjectorsGamingMotherboardsScience, Space & RoboticsStorageVideo CardsVirtual & Augmented Reality
All ReviewsAll ArticlesAudio, Sound & SpeakersCases, Cooling & PSUCPUs, Chipsets & SoCsComputer SystemsDisplays & ProjectorsGamingMotherboardsNetworkingPeripheralsRAMStorageVideo Cards
GuidesGamingAsk the ExpertsNewsletterAboutForums
RTX 3090 TiRTX 4090Diablo 2GTA 6Halo InfiniteElon MuskRTX 3080HDMI 2.1
Laptops
One thing we can count on is that over the coming months there will be a ton of new tablets that hit the market with various hardware configurations, operating systems, and price points. Most users are seemingly waiting on Android tablets to hit the market, but there will be many that want Windows so they can use the Office software they are used to. A new Windows 7 tablet has surface from a company called bModo called the bModo12. 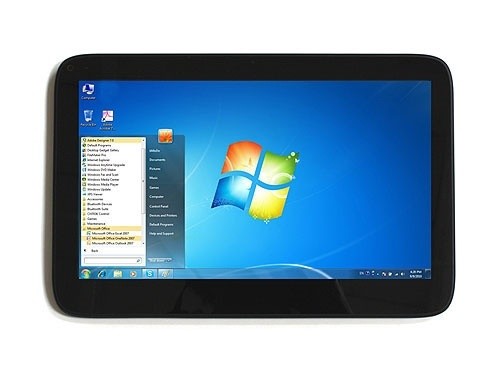 The tablet sounds like netbook on the inside with an Intel Atom processor, dual USB ports, a single SD card slot, HDMI output, and a SIM card slot. That SIM card slot will mean the device will be able to get mobile broadband access. The tablet also has a VGA resolution camera mounted on the front for video conferencing. The processor runs at 1.6GHz and the machine has 1GB of RAM. bModo says the tablet is like a combination of the iPad, Tablet, and notebook PC.

The bModo12 will support the apps that you use in the office like MS Office, Outlook, Acrobat, Photoshop, and the thing supports Flash and a lot more. It has Bluetooth, 3G connectivity, WiFi, an internal Mic, speakers, and a docking connector for a docking station that will ship in January 2011. Storage for the tablet is to a 32GB SSD and the screen is an 11.6-inch HD resolution unit. The tablet measures in at 11.61" x 7.68" x 0.55" and weighs under 2.2 pounds.
NEWS SOURCE:bmodo.com