All NewsBusiness, Financial & LegalCases, Cooling & PSUContests & GiveawaysCPU, APU & ChipsetsDealsDisplays & ProjectorsGamingMotherboardsScience, Space, Health & RoboticsStorageVideo Cards & GPUsVirtual & Augmented Reality
All ReviewsAll ArticlesAudio, Sound & SpeakersCases, Cooling & PSUCPUs, Chipsets & SoCsComputer SystemsDisplays & ProjectorsGamingMotherboardsNetworkingPeripheralsRAMStorageVideo Cards & GPUs
GuidesGamingAsk the ExpertsNewsletterAboutPrivacyForums
AMD Zen 4Intel ArcBattlefield 2042RTX 3090 TiRTX 4090RTX 4080GTA 6Elon MuskHDMI 2.1
Mobile Devices
If you want to be able to shoot the video from your iPad, iPhone, or iPod out to your TV you really need a dock of some sort today. The problem is that many of us have entertainment centers that are so crowded that a dock just won't fit. This is where Scosche comes in with a new cable for dockable Apple gadgets that will let you view that video on your TV. 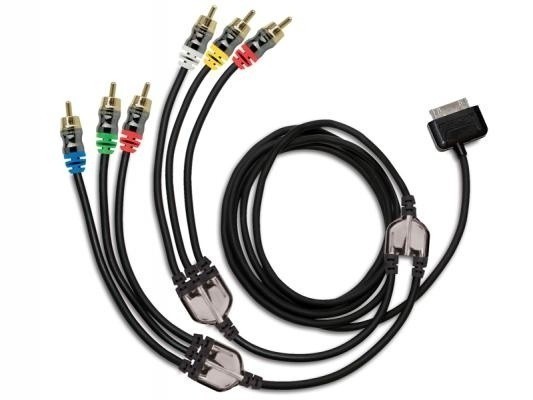 The cable is called the sneakPEEK II and has both component and composite connections on the TV end. On the end that attaches to your gadget is the standard Apple docking connector. That standard connector means the thing will work with any Apple device that can be docked including the iPad, iPhone, and iPod touch.

Another cool feature is that the cable has a micro USB port and comes with an AC adapter that will let you change your device while you play video back on the TV. Scosche specifically points out that the thing will work with the Netflix app on the iPad. I can see this being really good for those that plan to sign up for Hulu Plus as well. The cable is shipping now for $59.99 direct from Scosche.
NEWS SOURCE:scosche.com