All NewsBusiness, Financial & LegalCases, Cooling & PSUContests & GiveawaysCPU, APU & ChipsetsDealsDisplays & ProjectorsGamingMotherboardsScience, Space & RoboticsStorageVideo CardsVirtual & Augmented Reality
All ReviewsAll ArticlesAudio, Sound & SpeakersCases, Cooling & PSUCPUs, Chipsets & SoCsComputer SystemsDisplays & ProjectorsGamingMotherboardsNetworkingPeripheralsRAMStorageVideo Cards
GuidesGamingAsk the ExpertsNewsletterAboutForums
RTX 3090 TiRTX 4090Diablo 2GTA 6Halo InfiniteElon MuskRTX 3080HDMI 2.1
Audio, Sound & Speakers
One day we won't need an outlet to power or charge our gadgets, the sun will do it for us. Today the average solar cell can't capture enough power from the sun to charge or power most of our gadgets in a reasonable amount of time. A new concept gadget has surfaced with the Sony brand that uses solar power called the Eclipse. 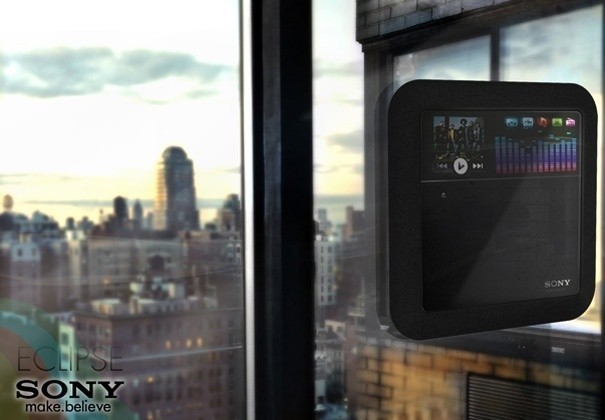 The Eclipse is a media a player that sticks to a window with a suction cup. The backside solar panels are able to capture power from the sun and apparently, the concept only uses solar power. The device would feature Bluetooth for connecting to a smartphone or PC for music streaming and getting other content and weather information.

The concept has integrated speakers and a tray to hold you PMP that pops out like a cassette deck from the 80's. The concept would also have an app for the iPhone or Android according to designers Hoang M Nguyen & Anh Nguyen that would provide screen savers for your smartphone as you listen to the music. I would say with the state of solar panels today this concept is likely to stay in the realm of dreams for a while.
NEWS SOURCE:yankodesign.com