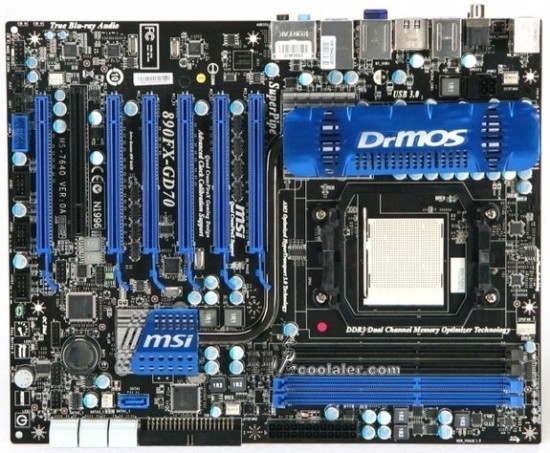 A picture of MSI's first RD890 offering has already surfaced on the web which it calls the 890FX-GD70. What we can learn from the picture is that it looks to sport MSI's 5-phase DrMOS, four DDR3 slots, a very extensive set of PCIe x16 slots (six!), six SATA 6Gbps ports along with a seventh blue one which may or may not also be SATA 6Gbps.

Further to that are buttons directly on the board for Power, Reset and OC'ing on the fly as well as Gigabit Ethernet, 7.1 audio, eSATA, FireWire and two USB 3.0 ports controlled by NEC's chip.
NEWS SOURCE:tcmagazine.com
Newsletter Subscription