All NewsBusiness, Financial & LegalCases, Cooling & PSUContests & GiveawaysCPU, APU & ChipsetsDealsDisplays & ProjectorsGamingMotherboardsScience, Space & RoboticsStorageVideo CardsVirtual & Augmented Reality
All ReviewsAll ArticlesAudio, Sound & SpeakersCases, Cooling & PSUCPUs, Chipsets & SoCsComputer SystemsDisplays & ProjectorsGamingMotherboardsNetworkingPeripheralsStorageVideo Cards
GuidesGamingAsk the ExpertsNewsletterAboutForums
Windows 11Halo InfiniteBattlefield 2042Elon MuskGTA 6RTX 3080HDMI 2.1Bitcoin Mining
3D
There is nothing like a new cool gadget and Fujifilm has one. This is a 3D Digital camera for the masses. The new camera is a small compact device that is capable of capturing 3D Images that are viewable without the need to special glasses.

The concept behind the capture is surprisingly simple; through the use of two lenses (similar to the old stereoscopic viewers) the camera is able to combine different fields of view (depth) into an image or movie that is fully 3 dimensional.

Fujifilm will also offer a special printing process for these images. The new FinePix REAL 3D W1 should hit the stores in Japan early next month followed by a general release late next month.

The REAL 3D W1 will not be an inexpensive gadget though; it will run about $640 US dollars. 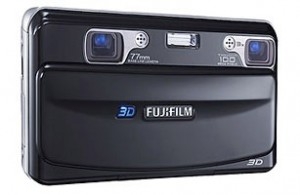