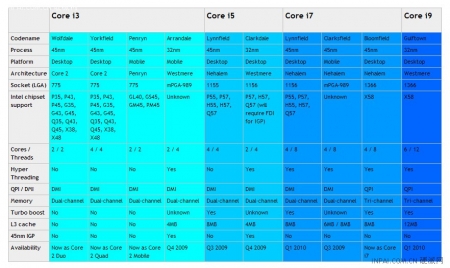 The news from INPAI.com.cn follows earlier decisions by Intel to rebrand the Core 2 Duo and Core 2 Quad chips as Core i3 and add confusion to consumers who were actually starting to understand the rebranding when Intel originally shifted to the Core 2 branding years ago. Now while the average enthusiast is going to know what is going on and not be fooled by what is going on here, the average consumer is going to get screwed into thinking Core i3 is something new, much like NVIDIA has done with the the 8800GT.

As long as Intel continues down this road for the future and does NOT rebrand existing products down the road, this could work out in advantage for everyone. Staying the course, everyone would know that Core i3 would a much different chip than Core i9, however surely AMD will change their naming to counteract Intel's Core i-series branding, much like they did when releasing the Athlon XP's.