Asus has been ahead of the game in the area of hardware OC since the downfall of ABIT and has taken the game to a new level with the OC Station. Users will have direct access to voltages, frequencies and timings right from a front panel. 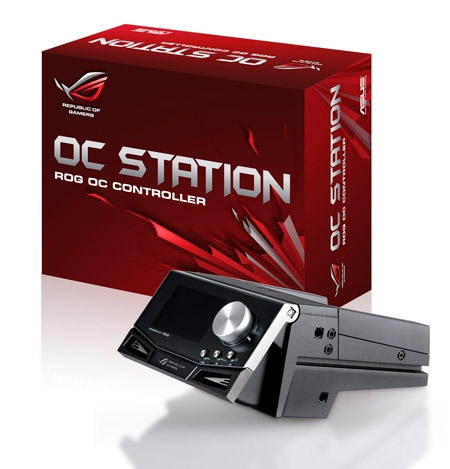 With the OC Station, ASUS has stamped its authority on an area that has proven elusive to other PC component manufacturers-pure hardware-based overclocking. The OC Station provides users with quick access to system voltages and frequencies without having to enter the BIOS. Users can overclock their systems on-the-fly via a knob, even during busy benchmark runs or actual gameplay. The OC Station also interfaces seamlessly with the embedded iROG controller on ROG motherboards, enabling users to manage ROG-exclusive features such as CPU Level Up and ASUS EPU-6 Engine at a hardware level. This allows users to achieve performance boosts and perform energy consumption tweaks instantly.