So it is without much surprise that for the upcoming sequel, BioShock 2, 2KGames have opted to include a multiplayer mode. In an announcement today, 2K have confirmed they will be partnering with Digital Extremes to deliver this mode.

If the name Digital Extremes doesn't ring a bell, it probably should - these guys have had their fingers in the FPS MP pie for quite some time, most significantly in a co-development role with Epic for most of the titles in the Unreal Tournament series across its various platforms. It goes without saying then that the multiplayer gameplay in BioShock 2 is starting to generate some large expectations, and if it can deliver, the sky is the limit for the series. No pressure, Digital Extremes! 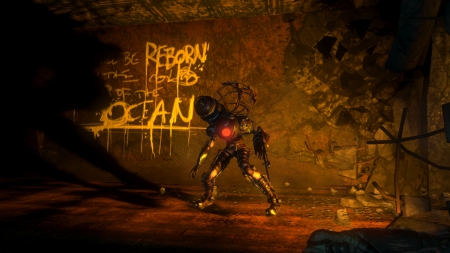 - Evolution of the genetically enhanced shooter - Earn experience points during gameplay to earn access to new Weapons, Plasmids and Tonics that can be used to create hundreds of different combinations, allowing players to develop a unique character that caters to their playing style.

- Extend the Rapture fiction - Players will step into the shoes of Rapture citizens and learn more about the fall of Rapture as they progress through the experience.

- See Rapture before the fall - Experience Rapture before it was reclaimed by the ocean and engage in combat over iconic environments in locations such as Kashmir Restaurant and Mercury Suites, all of which have been reworked from the ground up to deliver a fast-paced multiplayer experience.

- FPS veterans add their touch to the multiplayer experience - Digital Extremes brings more than 10 years of first person shooter experience including development of award-winning entries in the Unreal® and Unreal Tournament® franchise.