ASUS has two boards with the LGA 1160 socket: the P7U and P7U Pro. The only notable difference between the two appears to be the second PCIe x16 slot on the Pro, while the P7U has a PCIe X1 slot in place of it. 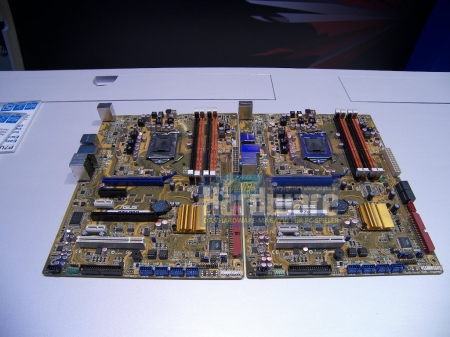 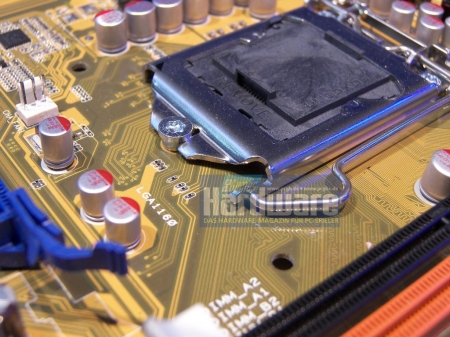 MSI is also showing off a P55 motherboard, the G9P55-DC. This board will support tri-SLI and as the board is pre-production, the cooling solution shown on the board will be upgraded before release. 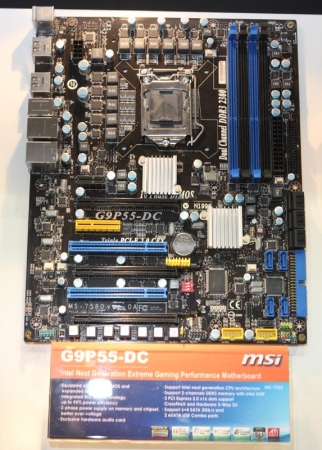 The CPU is fuelled by two independent 6-phase power circuits. Four DDR3 DIMM slots support dual-channel memory. Storage comes in the form of six SATA II ports routed to the P55 chip, with four (blue) SATA II ports and an IDE connector courtesy of an additional controller. The board features two PCI slots, a PCI-E x1 slot to hold a "hardware" sound card (part of the package), an open-ended PCI-E x4 slot and three PCI-E 2.0 x16 slots. In case you're wondering how the 16 PCI-E lanes the CPU ends up sparing for graphics ends up into a 3-Way SLI supportive solution, take a look at what would trick you for a southbridge. That, infact is the NVIDIA BR-03 chip. It can provide two PCI-E x16 links, or PCI-E x16, x8, x8 connections to the three slots, much like in the nForce 780a SLI solutions for the AMD platform.