All NewsBusiness, Financial & LegalCases, Cooling & PSUContests & GiveawaysCPU, APU & ChipsetsDealsDisplays & ProjectorsGamingMotherboardsScience, Space & RoboticsStorageVideo CardsVirtual & Augmented Reality
All ReviewsAll ArticlesAudio, Sound & SpeakersCases, Cooling & PSUCPUs, Chipsets & SoCsComputer SystemsDisplays & ProjectorsGamingMotherboardsNetworkingPeripheralsStorageVideo Cards
GuidesGamingAsk the ExpertsNewsletterAboutForums
RTX 4090Windows 11Halo InfiniteBattlefield 2042Elon MuskGTA 6RTX 3080HDMI 2.1
TRENDING NOW: Meta drops big crypto update for Facebook, 'effective immediately'
AMD recently gave a demo of its upcomming Istanbul Opteron's. It appears that Instanbul wil scale quite well with the addition of more cores due to the introduction of the new HT Assist (presumably HyperTransport Assist). This new feature is a probe filter that works to reduce the traffic on socket-to-socet HyperTransport links by storing an index of caches in the L3 cache and preventing unnecessary synchronization requests. AMD says that the amount of cache set aside for this in the BIOS and that the more space set aside, the more granular its operation will be. 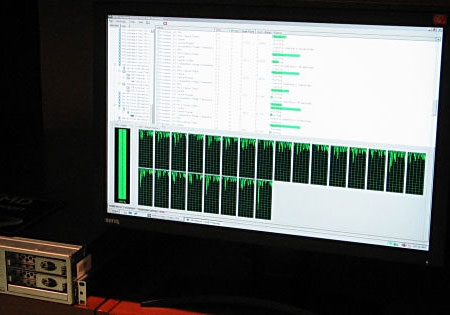 When Istanbul hits, it will be a drop-in upgrade for existing Socket F systems, provided the system supports split power planes and a BIOS update is done to support the new procs. AMD has stated in the past that Istanbul would hit in the second half of the year, but nothing more specific has been said. With working chips being shown off, you might be able to expect them sooner rather than later.

Otherwise-identical systems were situated side by side: one with a quartet of Shanghai Opterons, the other with four Istanbul chips. Both systems were running with HyperTransport 3 active-a capability coming soon to Shanghai Opterons but not yet available in current products. To illustrate the performance difference between the two boxes, the AMD tech ran a Stream benchmark. The 16-core Shanghai system produced throughput numbers in the range of 25,000 MB/s. The 24-core Istanbul box, by contrast, hit about 42,000 MB/s.