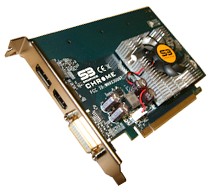 As the model implies, this particular card is better spec'd than the 530 GT and uses a full-size PCB instead of the low-profile PCB used on all Chrome cards in the past. The GPU is clocked at 800MHz whilst the 256MB of GDDR3 memory is also clocked at 800MHz. 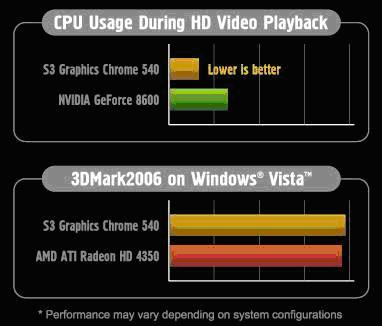 Other features include DirectX 10.1 and OpenGL 3.0 support, S3's ChromotionHD 2.0 video engine and a PCI-Express x16 interface. Connectivity is very good with DVI, HDMI and DisplayPort connectors.

Chrome 540 GTX - created by growing demand for DisplayPort! Chrome 540 GTX give users the DisplayPort in addition to HDMI and DVI. This allows users to create their PCs into true theatrical multimedia entertainment center on high-definition consumer electronics devices enjoy dual-stream (PiP) Blu-ray playback, consumer applications, and general 3D gaming. With support of the enhanced HD video codecs like H.264 and VC-1, along with a DirectX 10.1 graphics core for the latest 3D applications, the Chrome 540 GTX provides users with the best bang for the buck.

For a limited time S3 is bundling copies of InterVideo's WinDVD 8 software with the card whilst keeping the price to just $69.95 USD, making this a very attractive option for HTPC users looking for a new card purely for video playback, especially considering all the connectivity options it gives.
Newsletter Subscription