Finally for all of us that wanted to be a Jedi when we were little (I still want to be one ;)) there is a new toy that will let you explore your hidden force potential.

Ok so not really but it is a very cool idea and is one of the first mass marketed brain impulse controlled games out.

With this you use a neural sensing device (similar to an EGG reader) to control a small ball in a tower. With concentration you can move the ball up and down. Matel wants to make additional and more complex games based on the same technology. 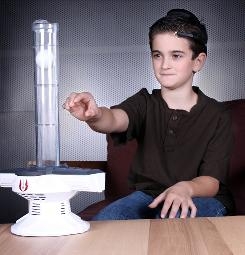 No, you're not tapping into some "all-powerful force controlling everything," as Han Solo said in the movies. But you are reaching out with mind power via one of the first mass-market brain-to-computer products. "It's been a fantasy everyone has had, using The Force," says Howard Roffman, president of Lucas Licensing.

Mind-control games may be the coming thing: Mattel plans to demonstrate a Mind Flex game (also due this fall), which uses brain-wave activity to move a ball through a tabletop obstacle course, at the Consumer Electronics Show in Las Vegas on Thursday.

In the Force Trainer, a wireless headset reads your brain activity, in a simplified version of EEG medical tests, and the circuitry translates it to physical action. If you focus well enough, the training sphere, which looks like a ping-pong ball, will rise in the tower.