Introduction and the VRM

The pulse width modulator (PWM) controller is responsible for overall control of the VRM circuit. It hooks into the VRM and not only turns on the power stages but also monitors and can affect the performance of the circuit. The VRM is a complex circuit in that it can't easily be built to extremes as there are always tradeoffs between performance targets, whether it be aggressiveness, current, or efficiency.

You can have great ripple and transient response, but that comes at the expense of efficiency and temperature. On the flip side, you can also increase component quality to reduce that reduction in efficiency, but that comes with very high component cost. We will go over each component and VRM so we can determine what GIGABYTE designed each VRM for.

Above, you can see GIGABYTE's X570 motherboard VRM cheat sheet. At the head of the pack, we have the X570 Aorus Xtreme, with a total of 16 phases, and all of GIGABYTE's all other top-notch features. The X570 platform can support CPUs with up to 16-cores, such as the 3950X, and to correctly support that CPU, motherboards require top-notch VRMs.

There is also the X570 I Aorus Pro WIFI, which is a mini-ITX motherboard with a total of 8 phases utilizing the highest quality components. The Elite and Gaming X have a total of 14 and 12 phases, respectively. The quality of the VRM here scales with the total cost of the motherboard. While that isn't a surprise, GIGABYTE has kept integrated powerstages on all motherboards except their lowest-end model, the Gaming X. 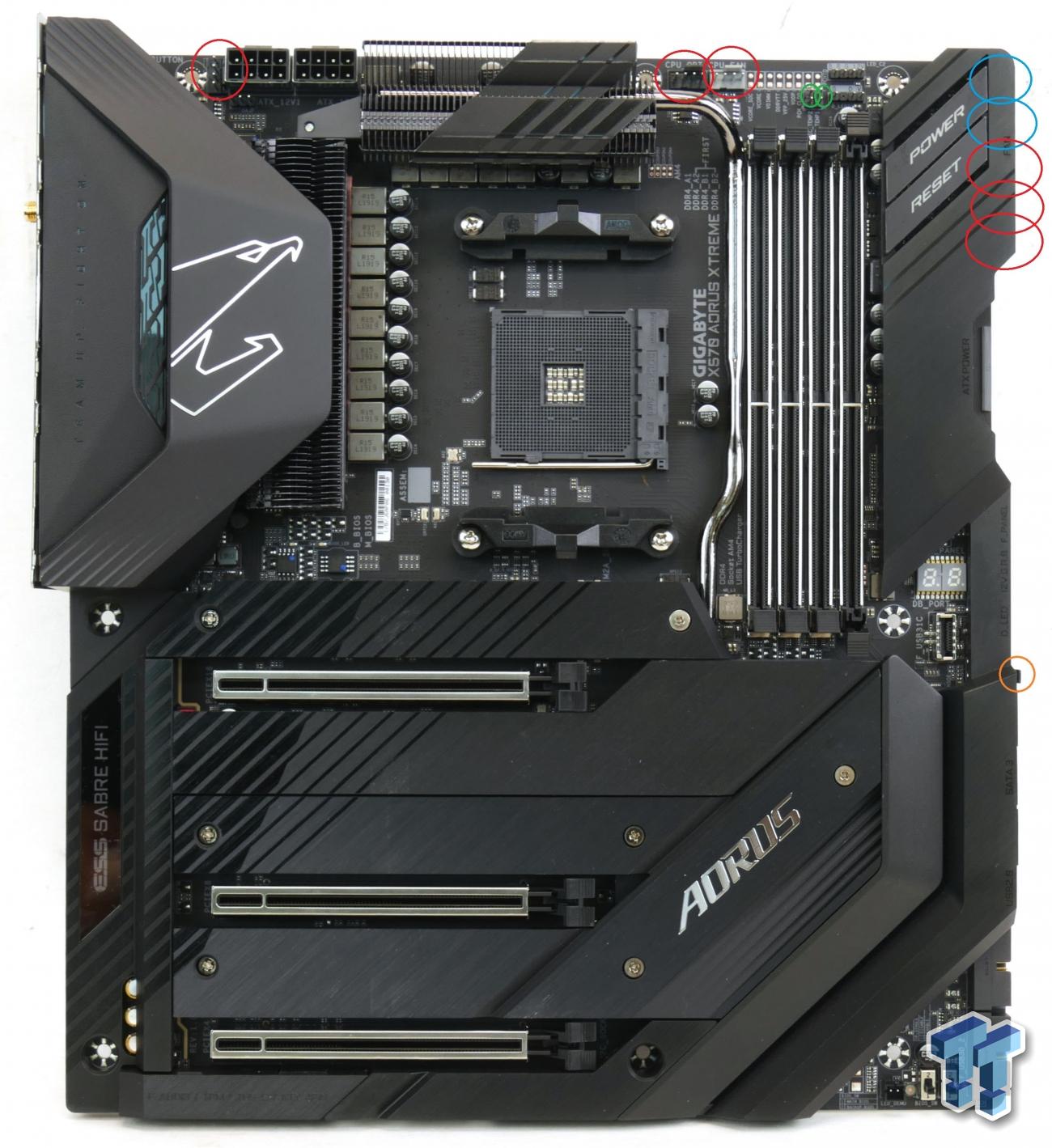 The X570 Aorus Xtreme is one of the most expensive and loaded X570 motherboards on the market. It's the epitome of GIGABYTE's design engineering. It utilizes a 2oz PCB with eight PCB layers to optimize cooling and signal integrity. All its shields are made of metal, which also increases its cooling capability. 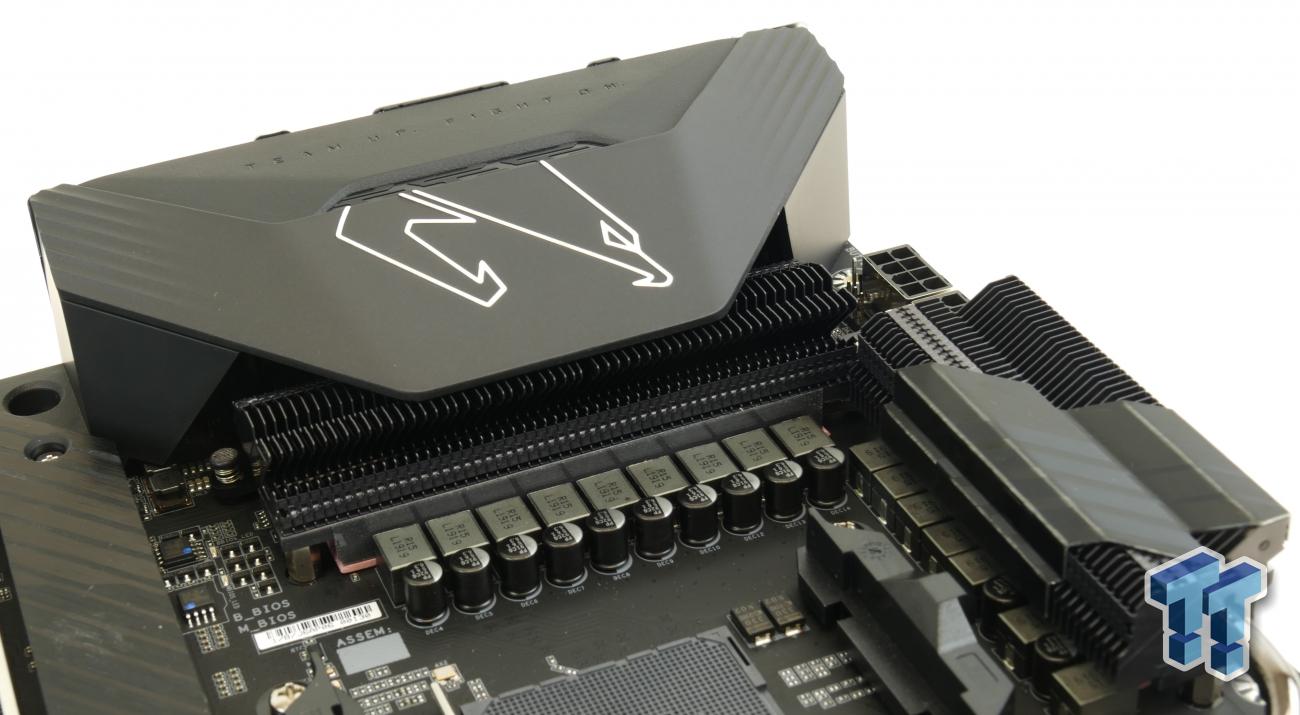 The heat sink has a large heat pipe running through it, and it extends to the chipset area of the motherboard as well. Cooling the VRM is just as important as the component quality, and with a high-performance VRM such as this one, it's significant for longevity and performance. It utilizes a direct touch copper heat pipe as well, with a copper fin array. 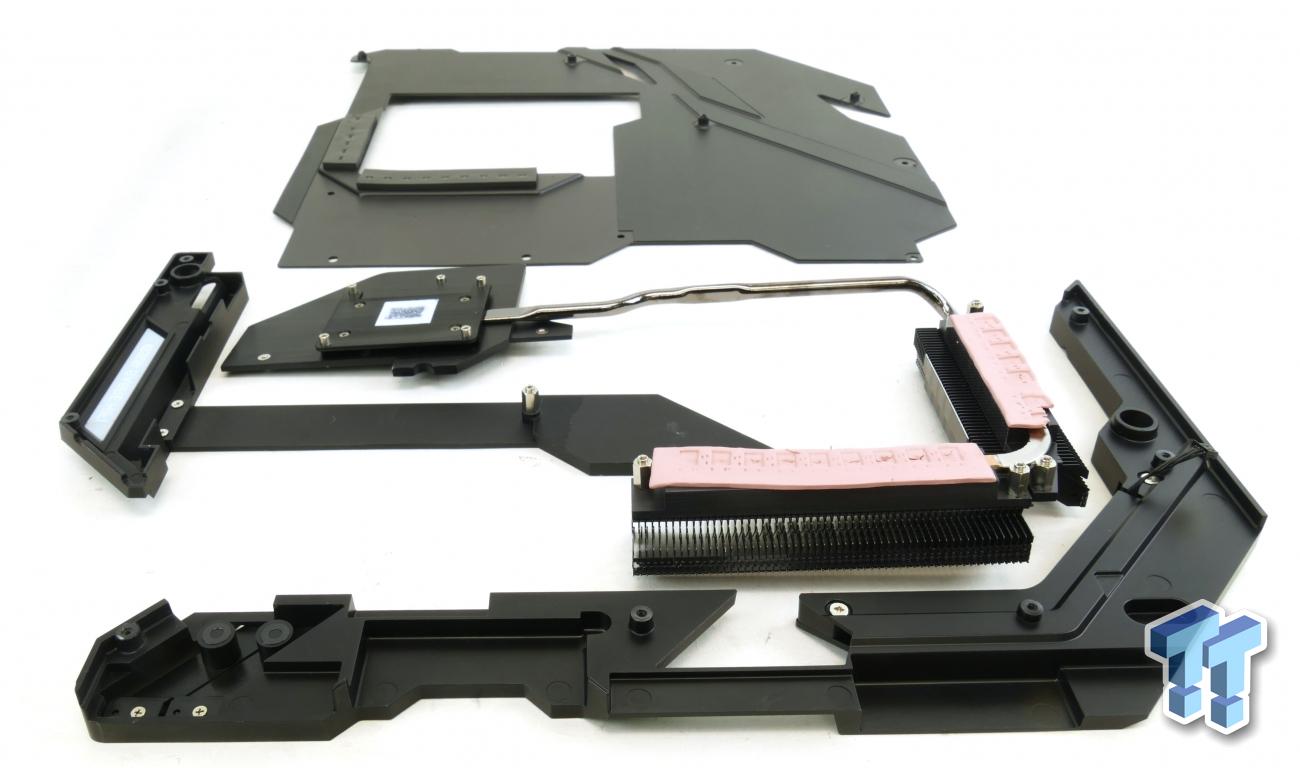 The motherboard utilizes 5W/mK VRM thermal pads between the heat sink and the VRM components, but also on the backside of the VRM, between the back-rear shield and the rear portion of the VRM. 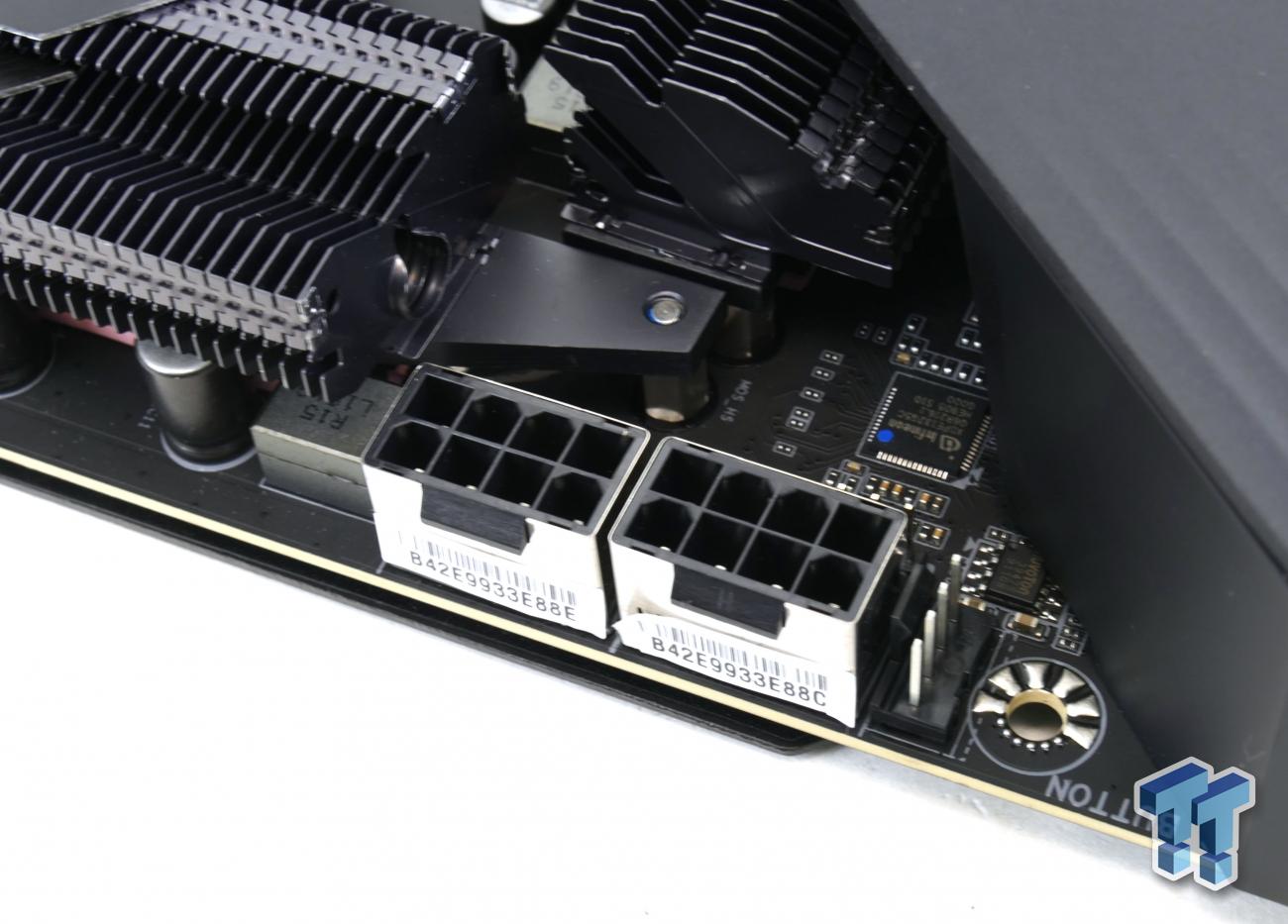 While most X570 motherboards have a standard 8-pin power connector for the CPU, the Xtreme has two connectors. While two power cables aren't required, it's a nice idea to utilize them if you use more extreme cooling. People don't realize that the power connections won't stop higher current draws than their rating. In general, each 8-pin power connector can take up to 300W, but depending on the cable and solder quality, you can literally heat things up if you go beyond that.

What will happen first is that the power cables will get hot, individually their insulation will start to melt. Then depending on the weakest point, typically the solder joint of the connector, things will get hot enough to melt it. All that being said, this motherboard is designed to get over that, so you will never have that issue with current AMD CPUs. It's nice that GIGABYTE also reinforced the connectors with a metal housing. 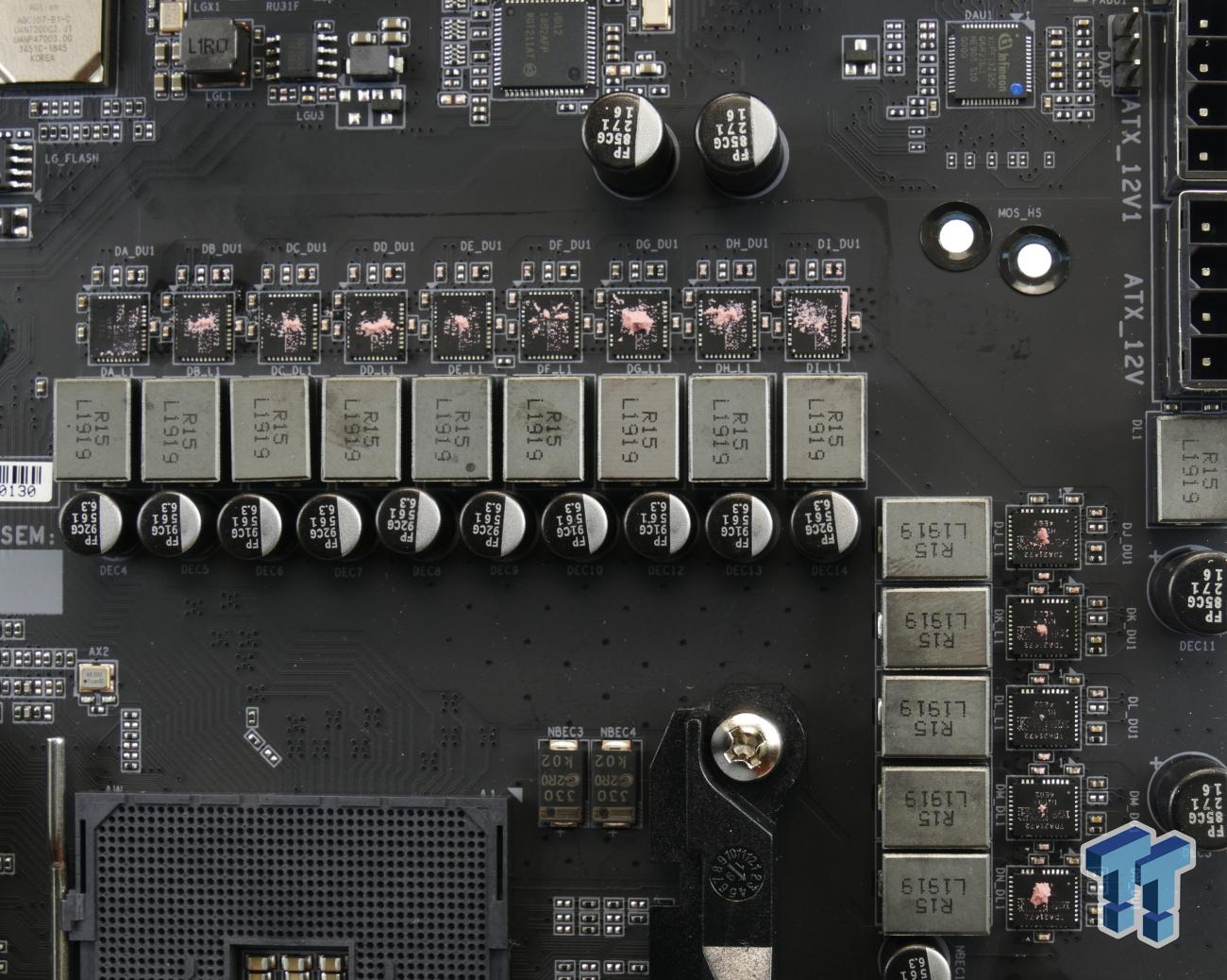 The AMD CPU takes in two major voltage rails; the CPU VCore rail and the SoC rail. The VCore goes to the cores while the SoC powers lesser things like the I/O Die that contains PCI-E controllers and the like. In this case, we find Infineon (they own IR) 70A power stages, some of the best in the industry, and brand new parts. They area the Infineon TDA21472, and you get 14 of them for the VCore and two for the SoC. That's more than enough for anything, and combined with the cooling, they are unstoppable. To add on to things, GIGABYTE utilizes a direct phase configuration. 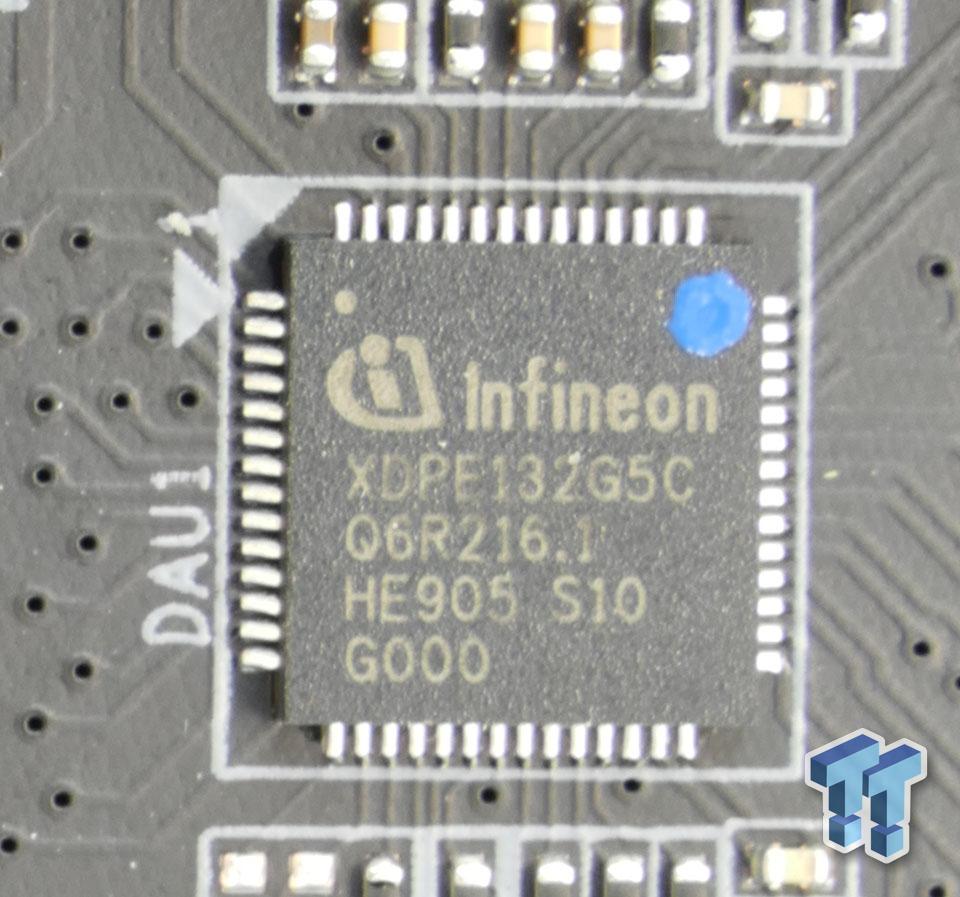 There are three ways to hook up a power stage to a PWM controller; direct, doubler, and copied. There is also the daisy chain method, but that hasn't been used in a very long time. Up until now, no one had more than 8 direct phases (except with infrequent occurrences in the past). That means that each of the eight PWM channels had a direct connection to the driver, either external or internal depending on the power stage. However, with the advent of the Infineon XDPE132GC digital controller, things have changed. Not only is it designed to support a whopping 1000A of current, but the PWM controller offers up to 14+2 phase output (or configurable to 8+8).

That means the PWM controller has a direct line to each phase, which offers three main benefits. Higher channel numbers increase something called the interleaving effect, so 4-true phases will have worse performance with things such as voltage ripple than a 6-true phase PWM controller. Having true phases also increase efficiency, and in this case, GIGABYTE says they achieved 4% better results than if they took 7 true phases and doubled them to 14. 4% doesn't sound like much, but it's basically the difference between an 80+ Silver and 80+ Platinum system PSU, which is a big deal. 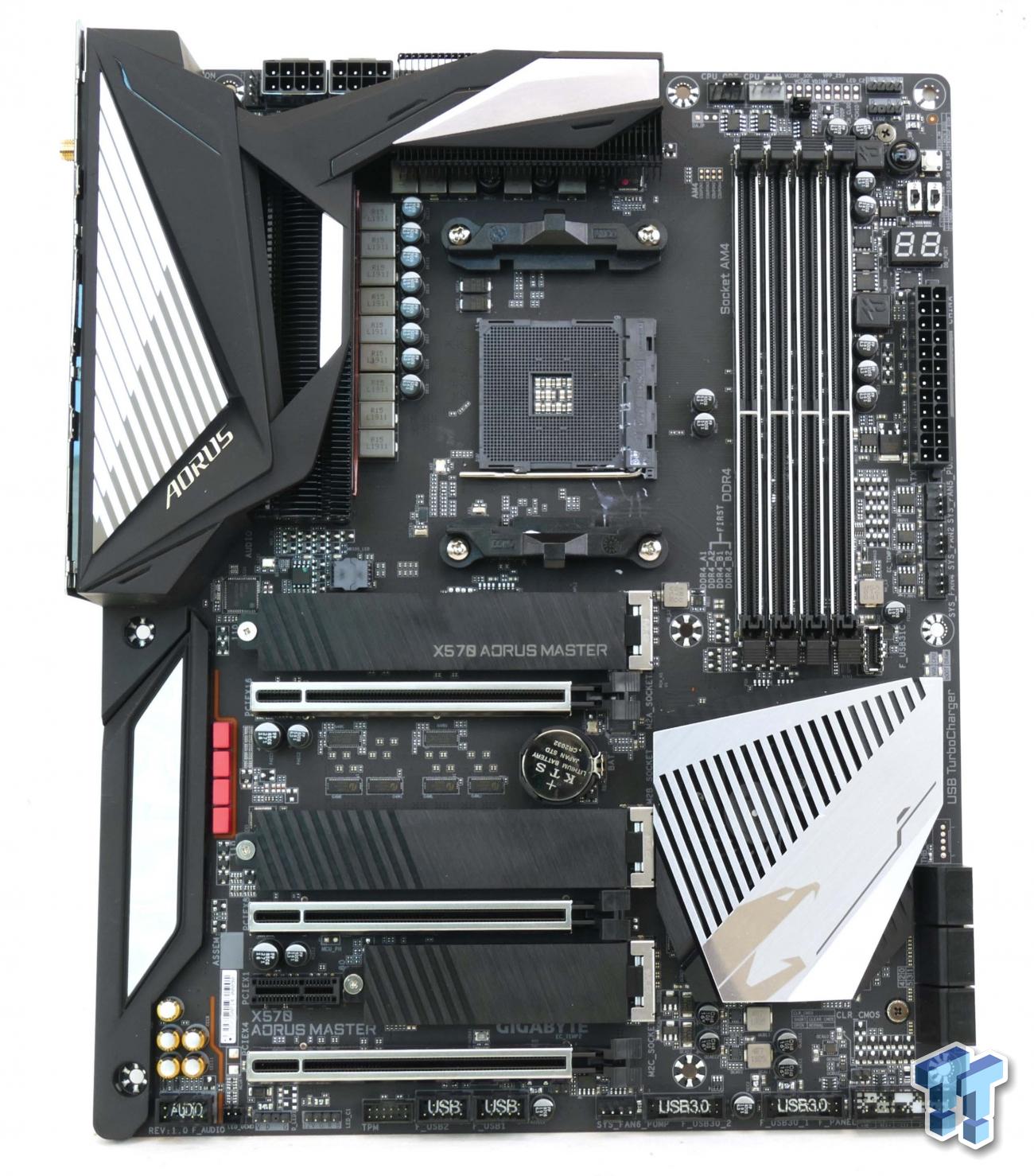 It also comes with a copper direct touch heat pipe with a copper fin array. As we stated before, cooling the VRM is just as important as the component quality, as heat is the biggest enemy of VRM performance. 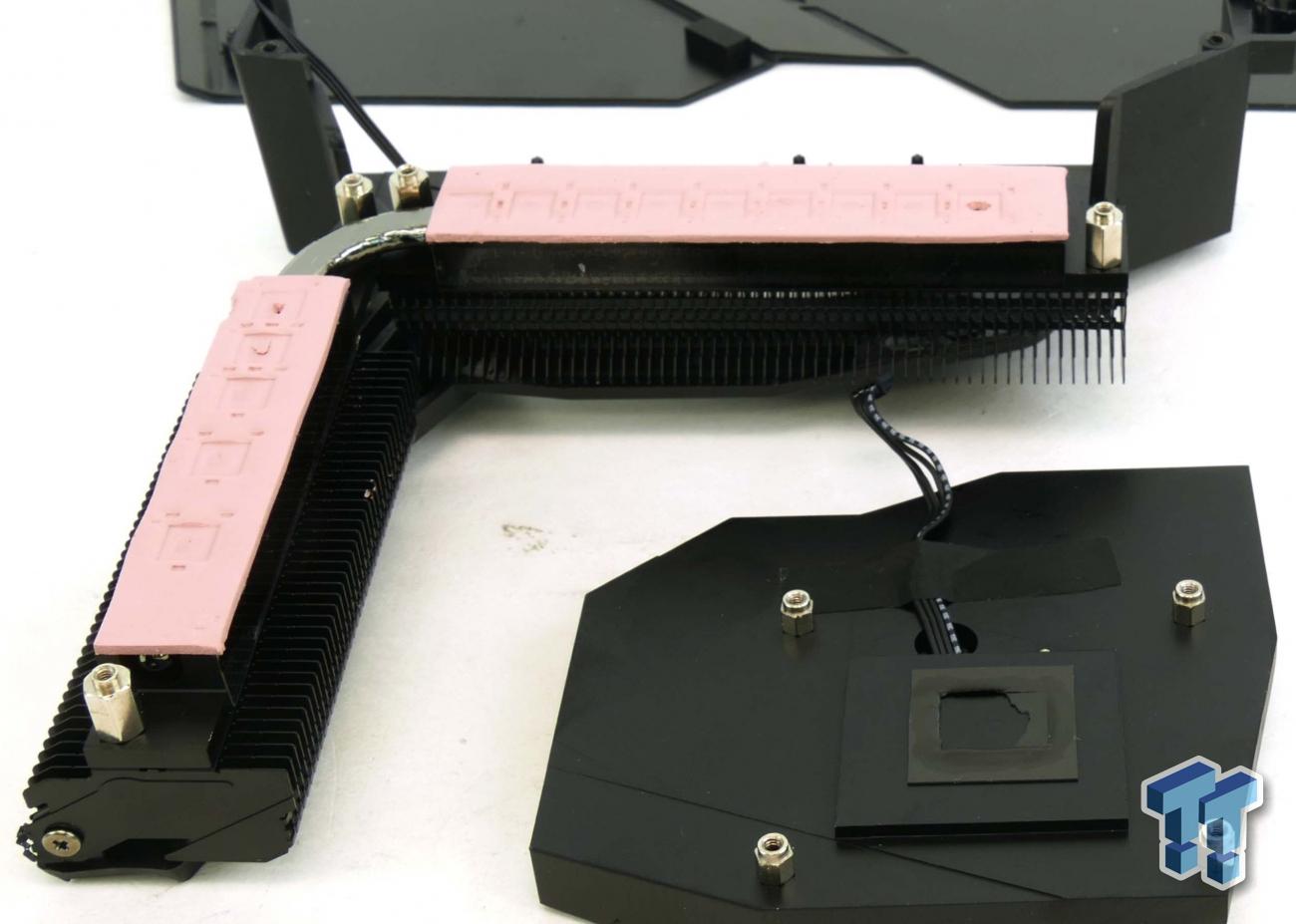 Like the Xtreme, and unlike all the other GIGABYTE X570 motherboards, the X570 Aorus Master offers up the higher quality 5W/mK thermal pads on the top and rear of the VRM components and PCB. 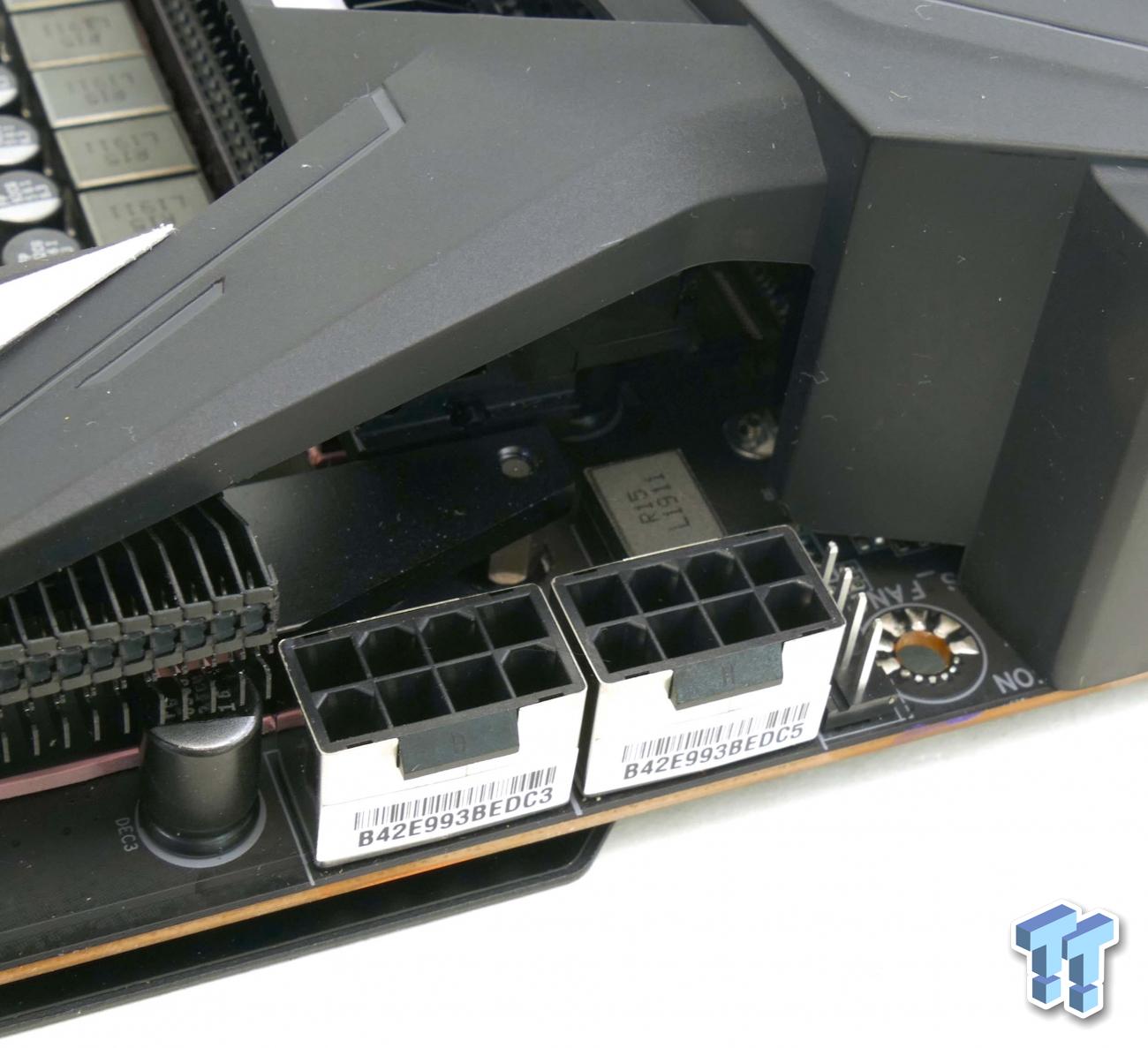 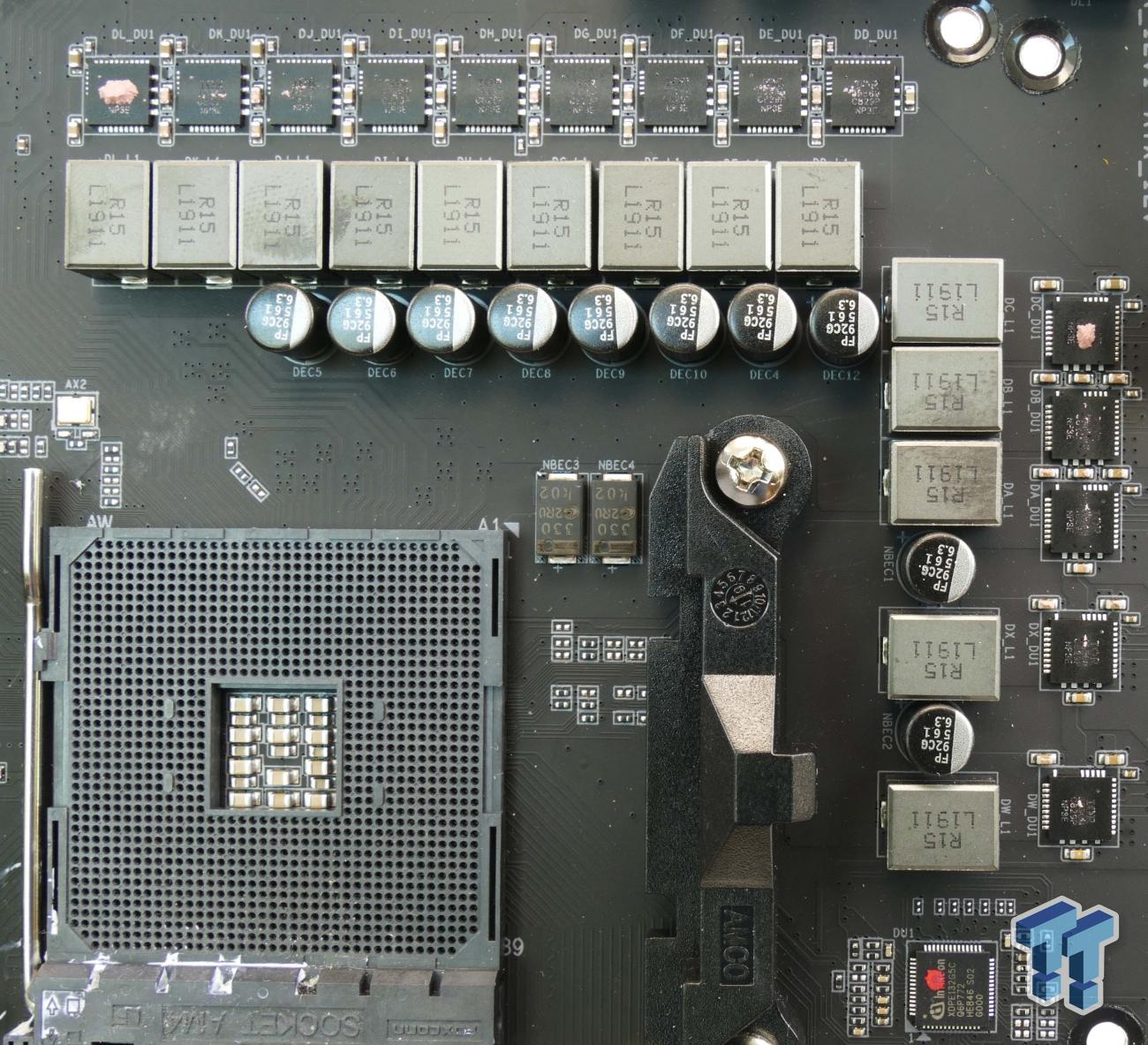 Like the Xtreme, the Master features integrated power stages from IR/Infineon. Specifically, it includes a 12+2 phase arrangement for the CPU+SoC, but instead uses 50A IR3556 PowIRstages. The PowIRstages might not be the same 70A part as what we find on the Xtreme, but they are still way overkill in a 12-phase arrangement. 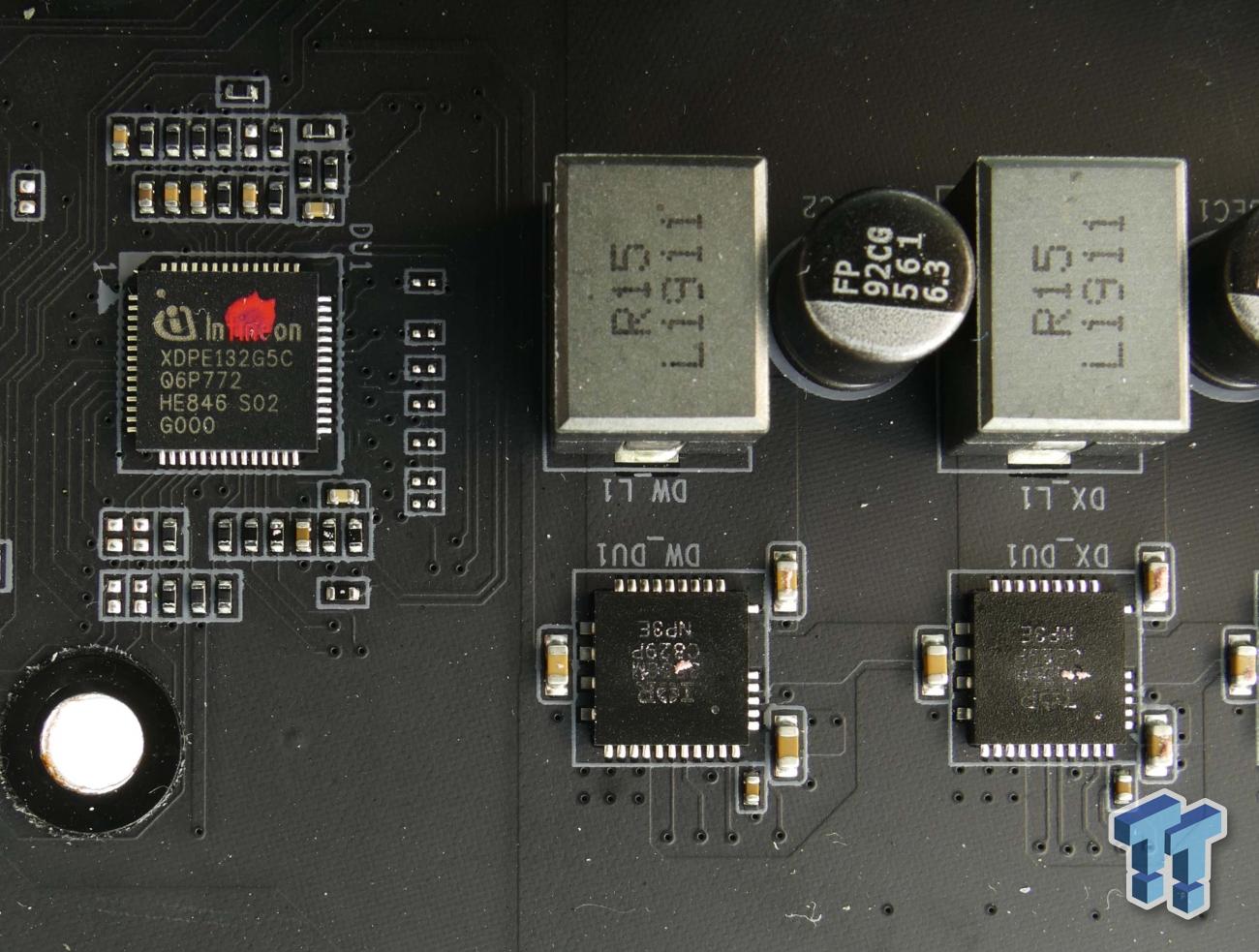 Once again, GIGABYTE over-engineered a direct PWM solution using the same, first of its kind, and prohibitively expensive Infineon XDPE132G5C, which was cut out of plans by other vendors due to high cost. The new digital PWM offers up to 14+2 PWM channels, and in this case, 12+2 are being used. While the Master is not at the level of the Xtreme when it comes to phase count or powerstage output, it has all the same features, and close to the same insane level of overengineered overkill. 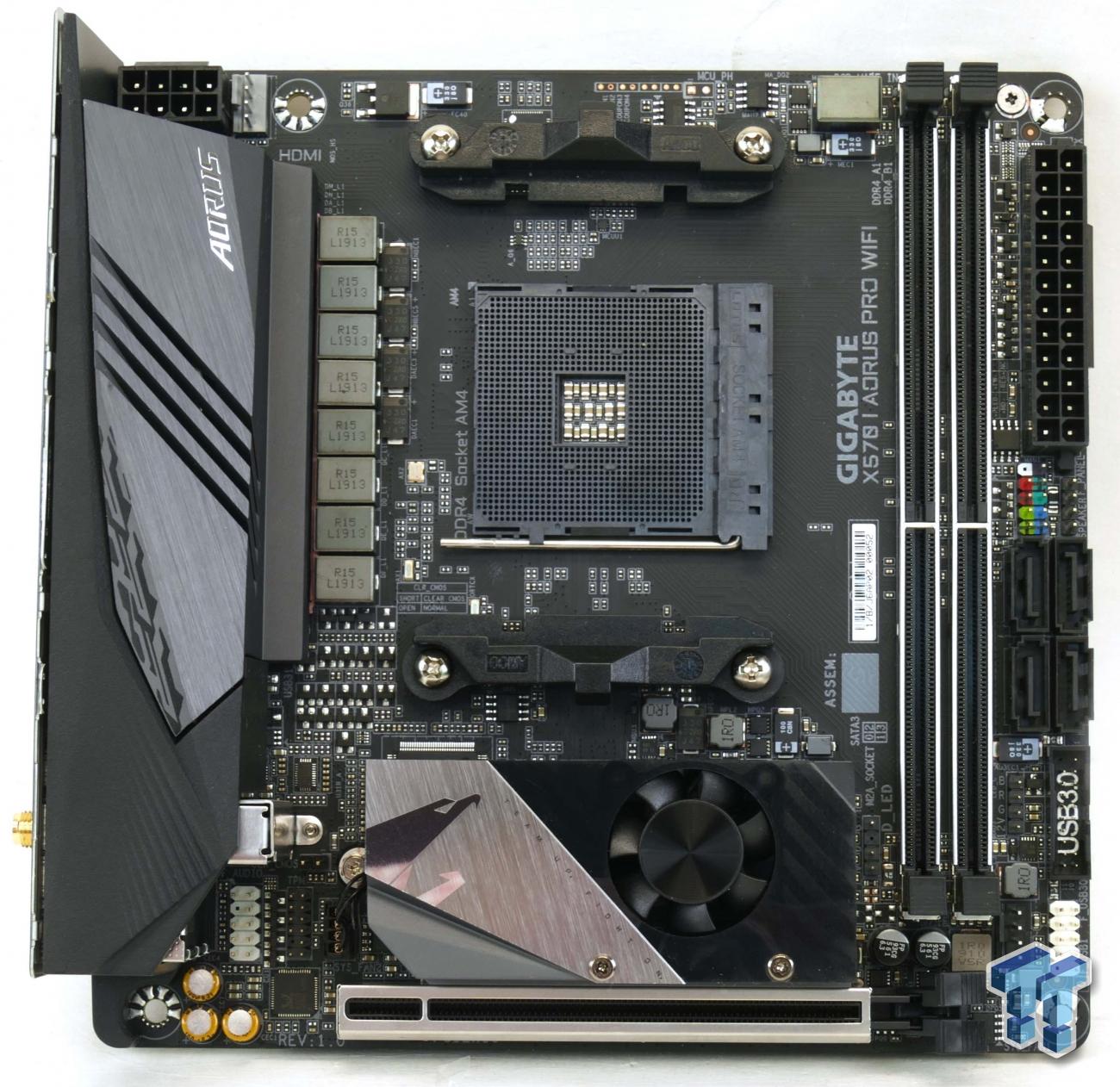 If you haven't realized it yet, we are ranking these motherboards by their VRMs, and in this case, we are a fan of GIGABYTE's mini-ITX gaming motherboard VRM. The X570 I Aorus Pro WIFI features the same high quality as the Xtreme, with lower phase count, but very impressive results. It can theoretically push out over 450A of current just through the VCore rail with only six phases, which would be equivalent to 9-phases on the Master. The Xtreme and the X570 I Aorus Pro WIFI are the only two GIGABYTE X570 motherboards with an 8-layer PCB. 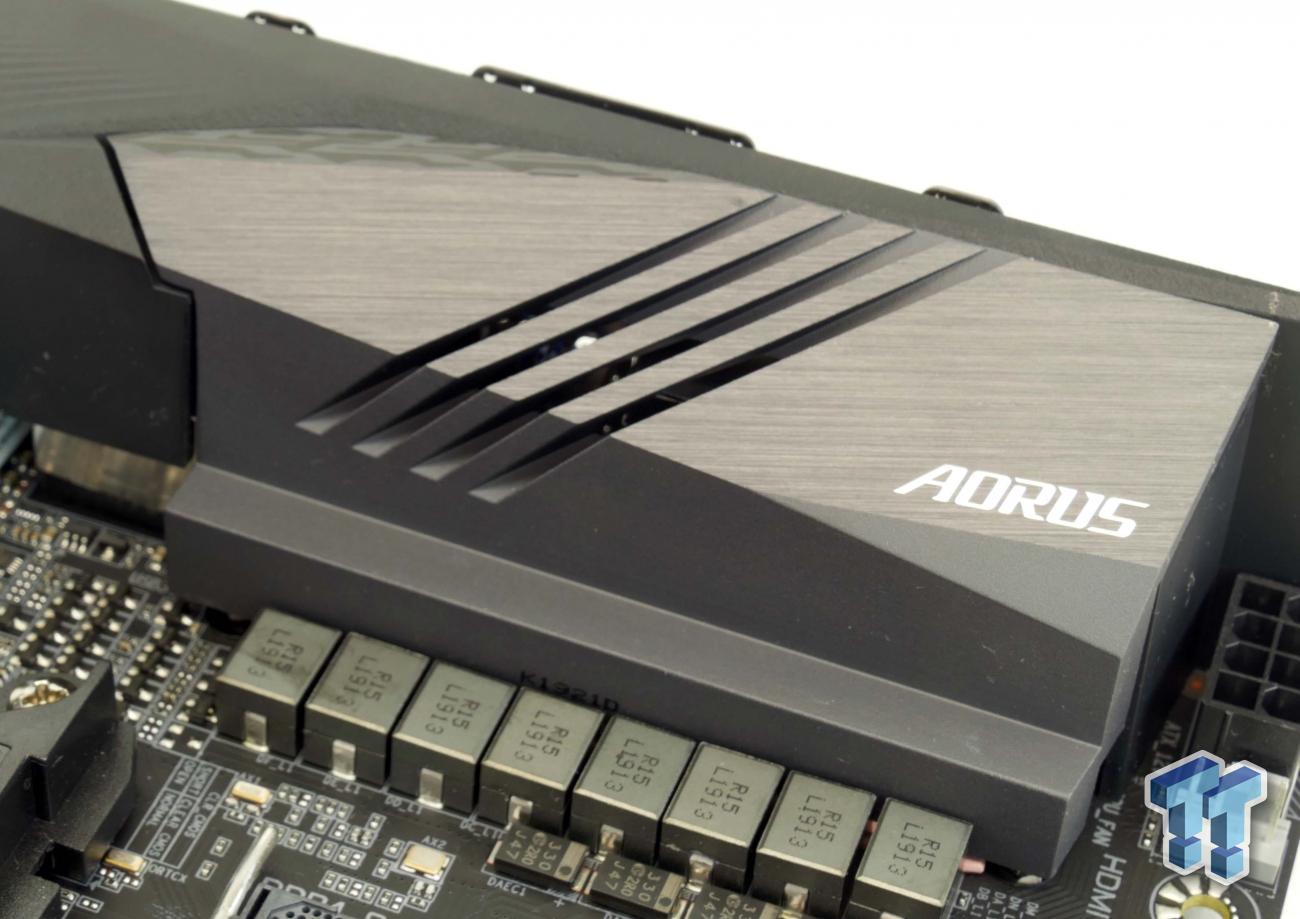 The VRM heat sink is a bit smaller than on the other GIGABYTE motherboards, but it's quite big and heavy, and actually does a decent job of cooling the VRM. 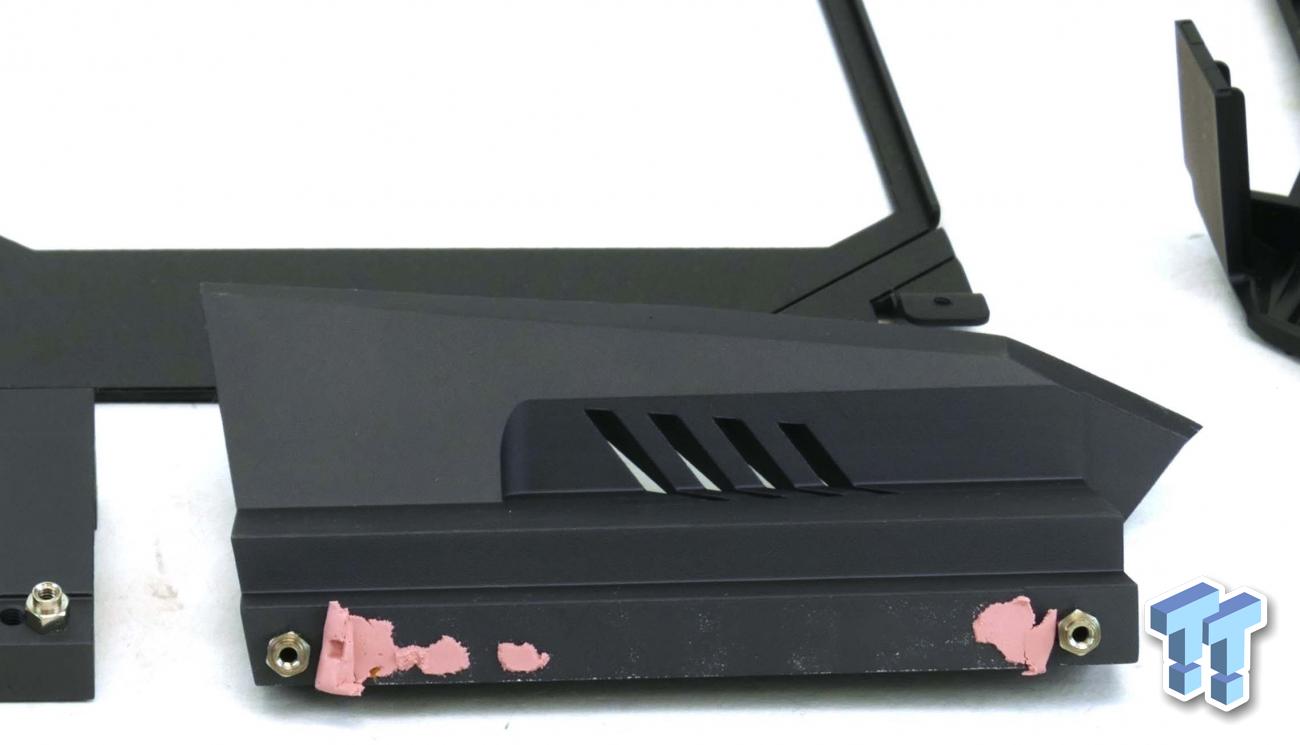 The motherboard, being a mini-ITX motherboard, doesn't have much room for a larger VRM heat sink, so GIGABYTE made up for it with density and component quality. 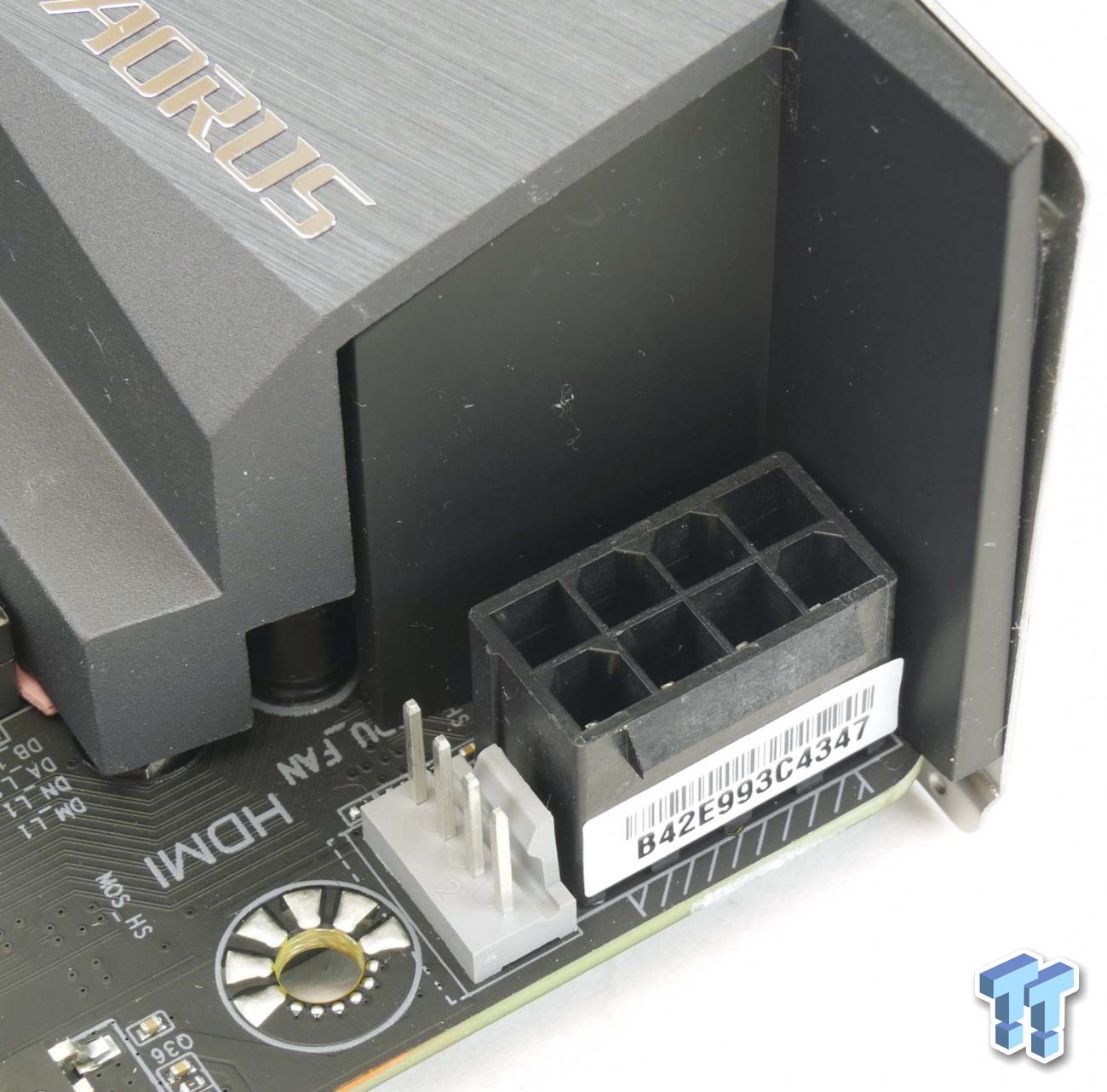 The motherboard features a single 8-pin power connector, which can take up to 300W to the CPU VRM. While that might seem a bit less than the Master and Xtreme, it's still more than enough for proper power delivery, even when heavily overclocking a CPU above ambient conditions.

Here is where things get really nice; the motherboard features those beautiful TDA21472 70A powerstages from Infineon. They are not only brand new and high priced, but they also output so much current per their density so that a small motherboard like this can function during overclocking. While a 6+2 phase count might sound low, it's more than enough because of the quality of the components on a motherboard this size. The SoC phases use the International Rectifier (IR) IR3553 PowIRstages, which are rated 40A each. 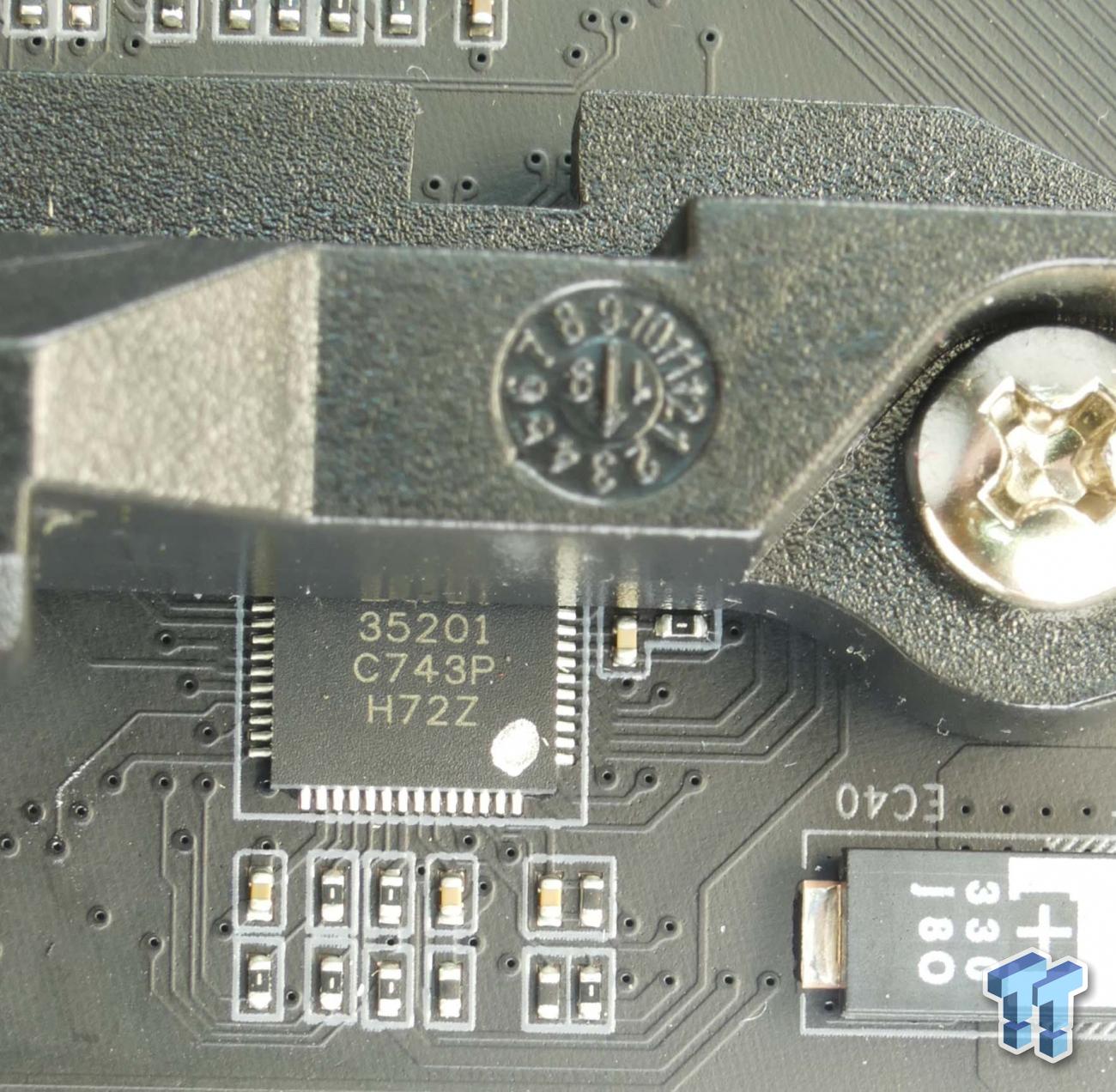 We mentioned before that the new Infineon controller that supports up to 16 phases is very costly, but in this case, it's unnecessary since the motherboard needs only 8 PWM channels. Instead, GIGABYTE used the IR35201, a staple in the high-end digital PWM game, which is capable of up to 8 PWM channel outputs and configured to 6+2 phases here. 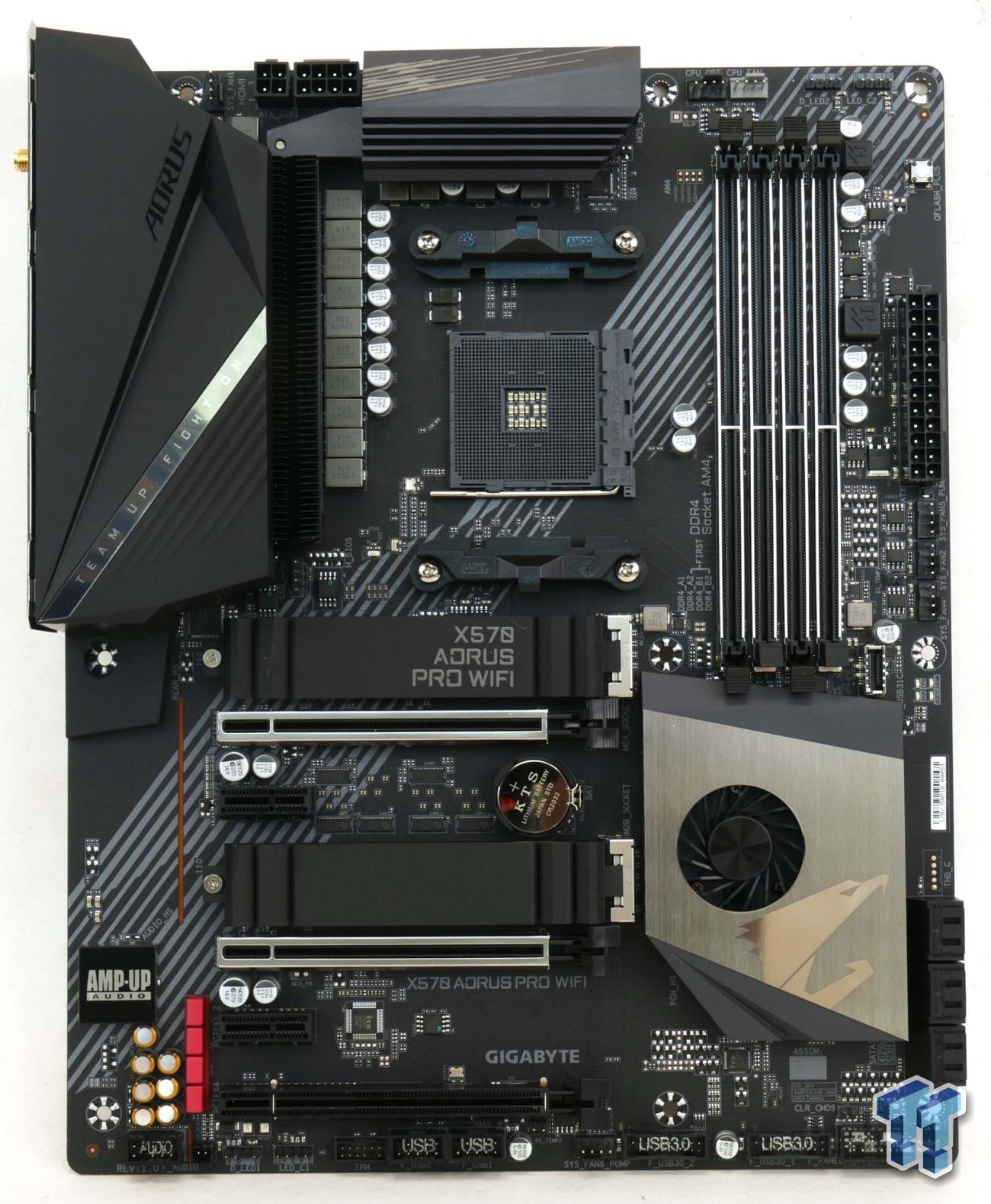 The GIGABYTE X570 Aorus Ultra and the Aorus Pro/WIFI have the same VRM component design. They each have 12+2 phases utilizing IR digital power componentry. Both of them also have a 6-layer PCB, which is more than enough. 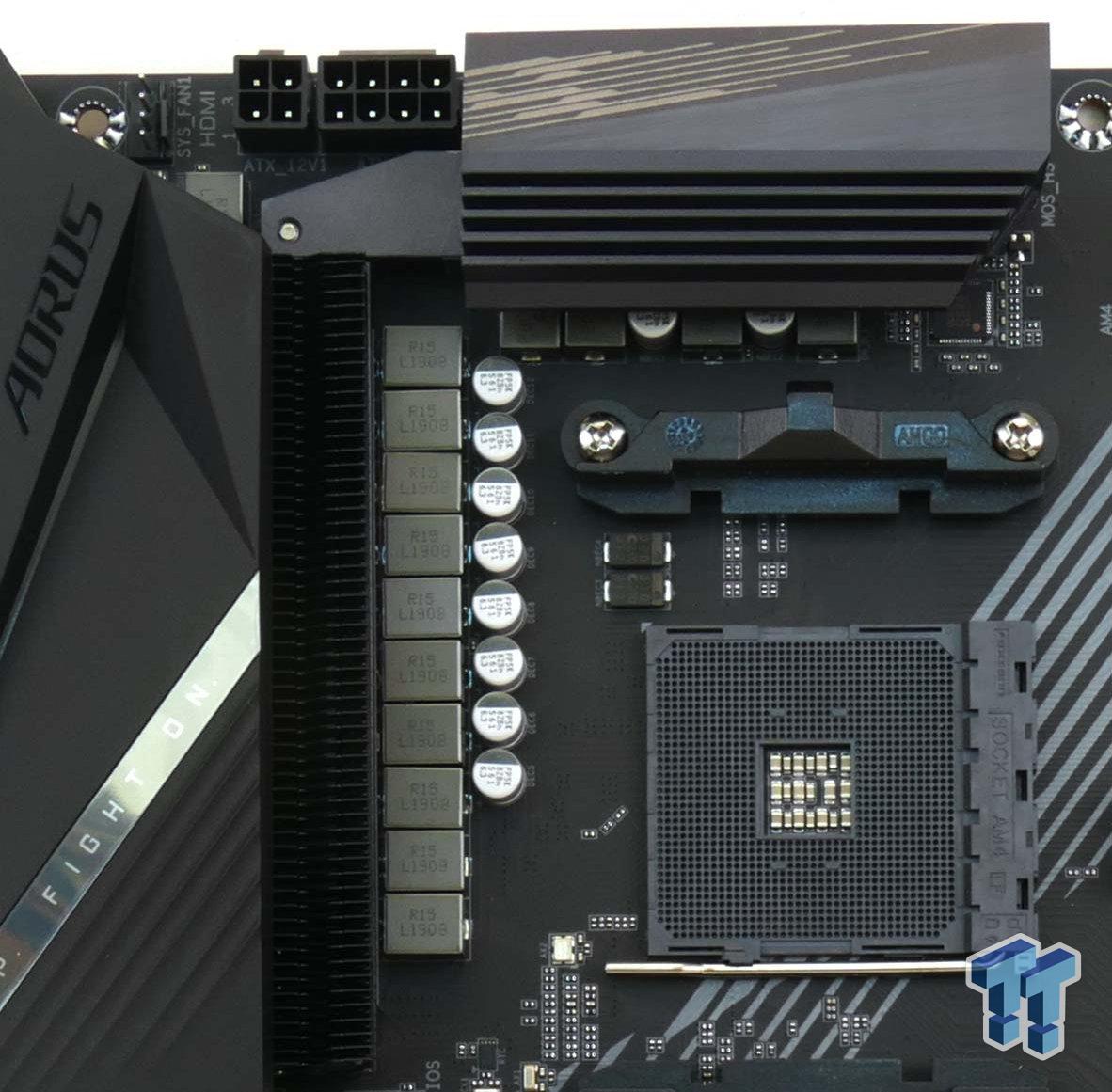 Like the Ultra, the Pro WIFI features a direct touch copper heat pipe with a copper fin array. The move from a solid heat sink to one with copper fins has been one of the things GIGABYTE has been doing quite right compared to most of the competition over the last few years. 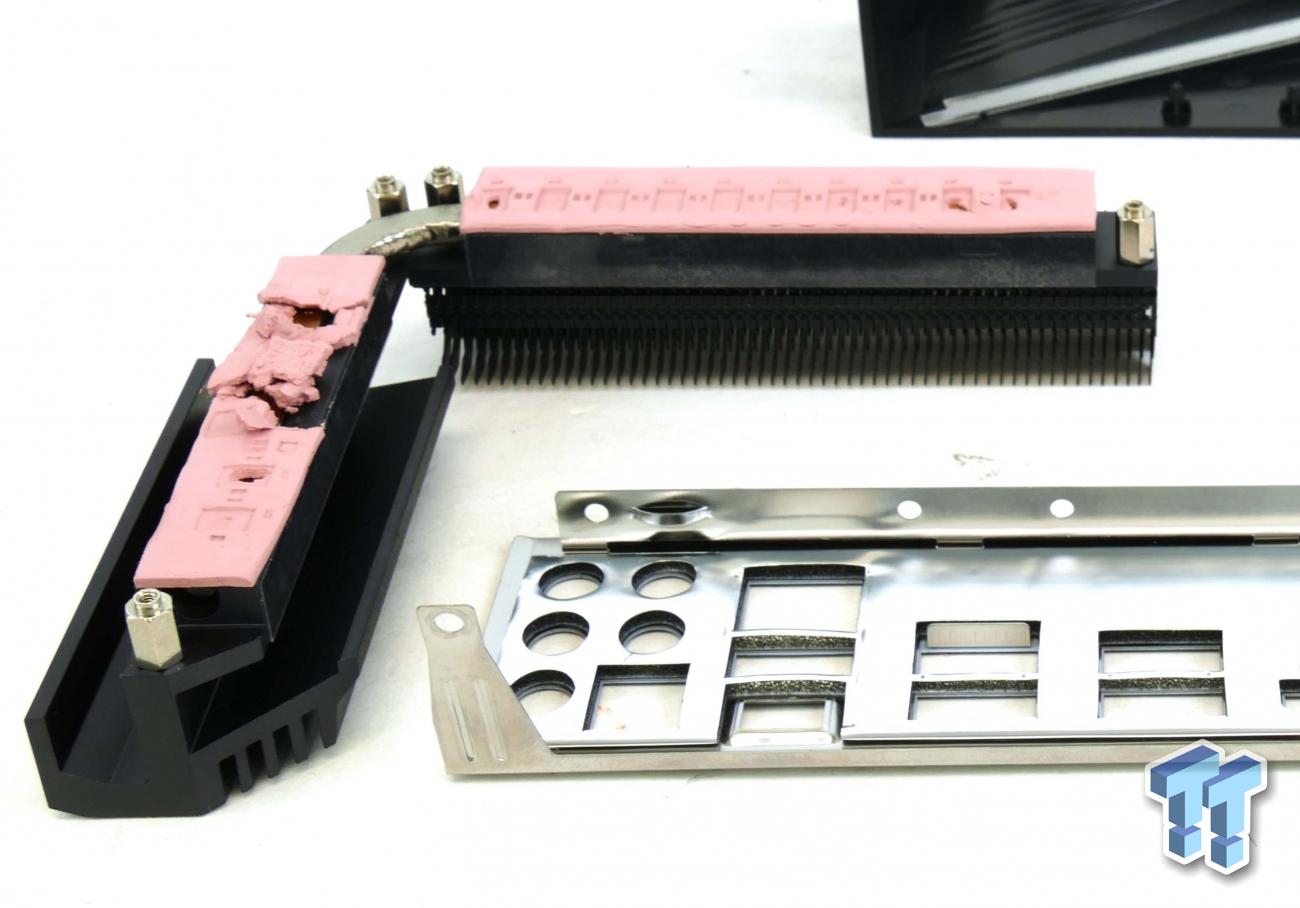 The Ultra features the 5W/mK thermal pads, but here we have normal ones. In this case, we don't have any issues with performance. We can also see how well the thermal pads make contact with the components, as you can see the imprint of the PowIRstages on the thermal pads. 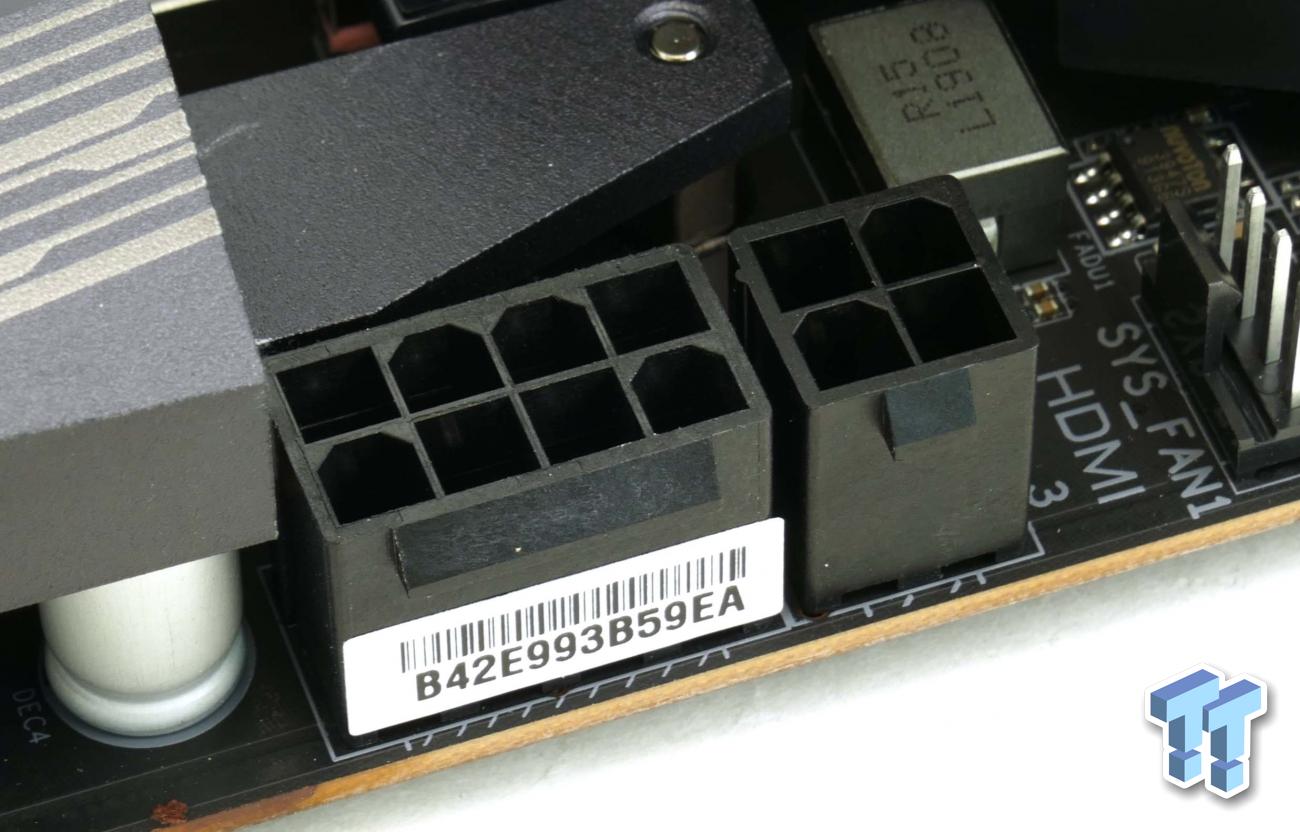 In between the X570 I Pro WIFI and the Master, the Pro WIFI offers an 8+2 pin power connector. While you only need to use the 8-pin connector, the option is there is you want to pump another 150W into the CPU VRM. 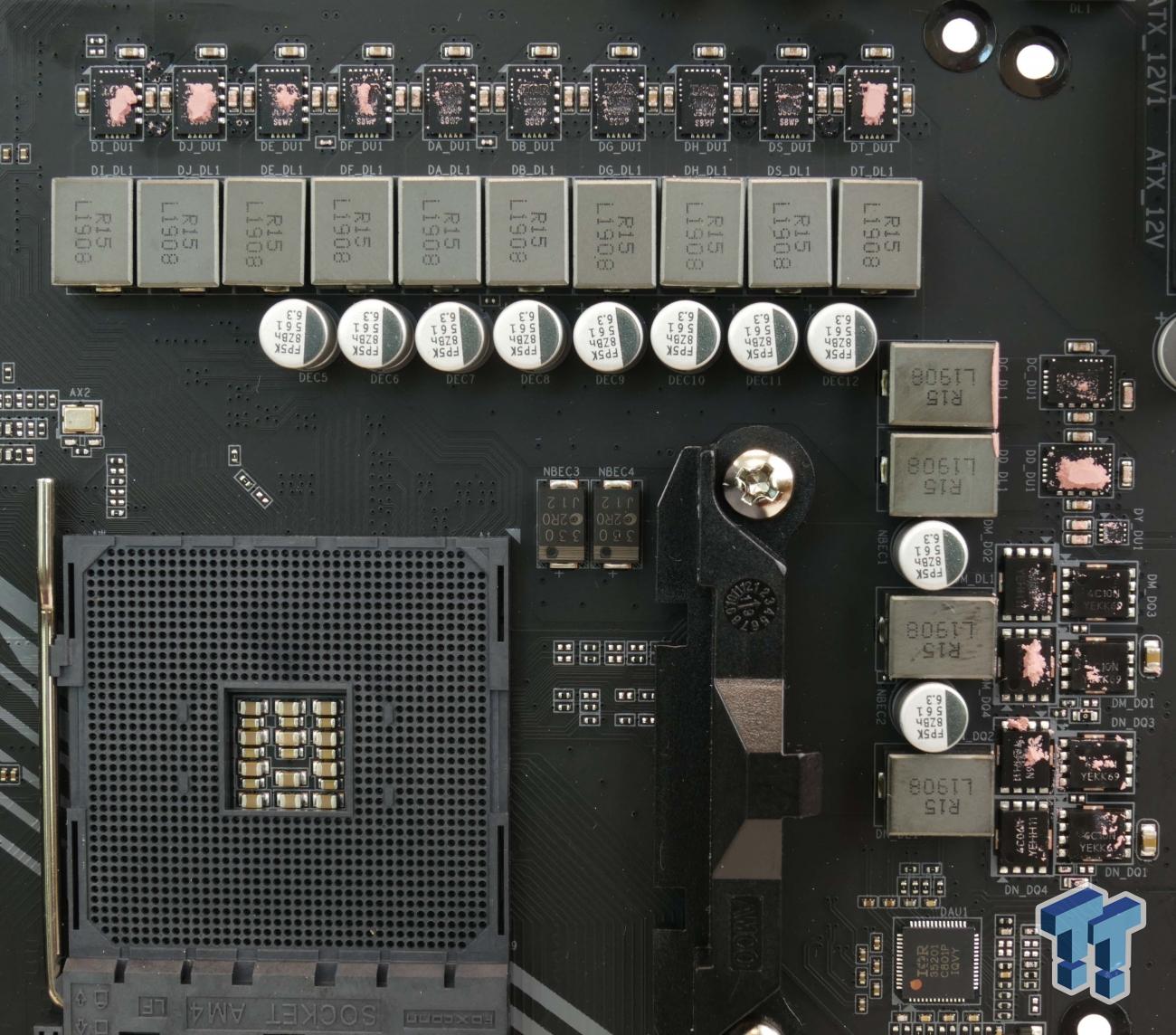 While we don't find the same power stages as the other X570 motherboards we have covered, we do find PowIRstages. We find 12 IR3553 40A power stages for the main CPU VRM. These are more than enough for the main CPU VCore VRM. For the SoC we get PowerPAKs, in a 2-high/2-low configuration. Most times, you find a 1-high/1-low configuration, as that's all you need for a full powerstage, but GIGABYTE doubled that count to improve performance for the SoC rail. 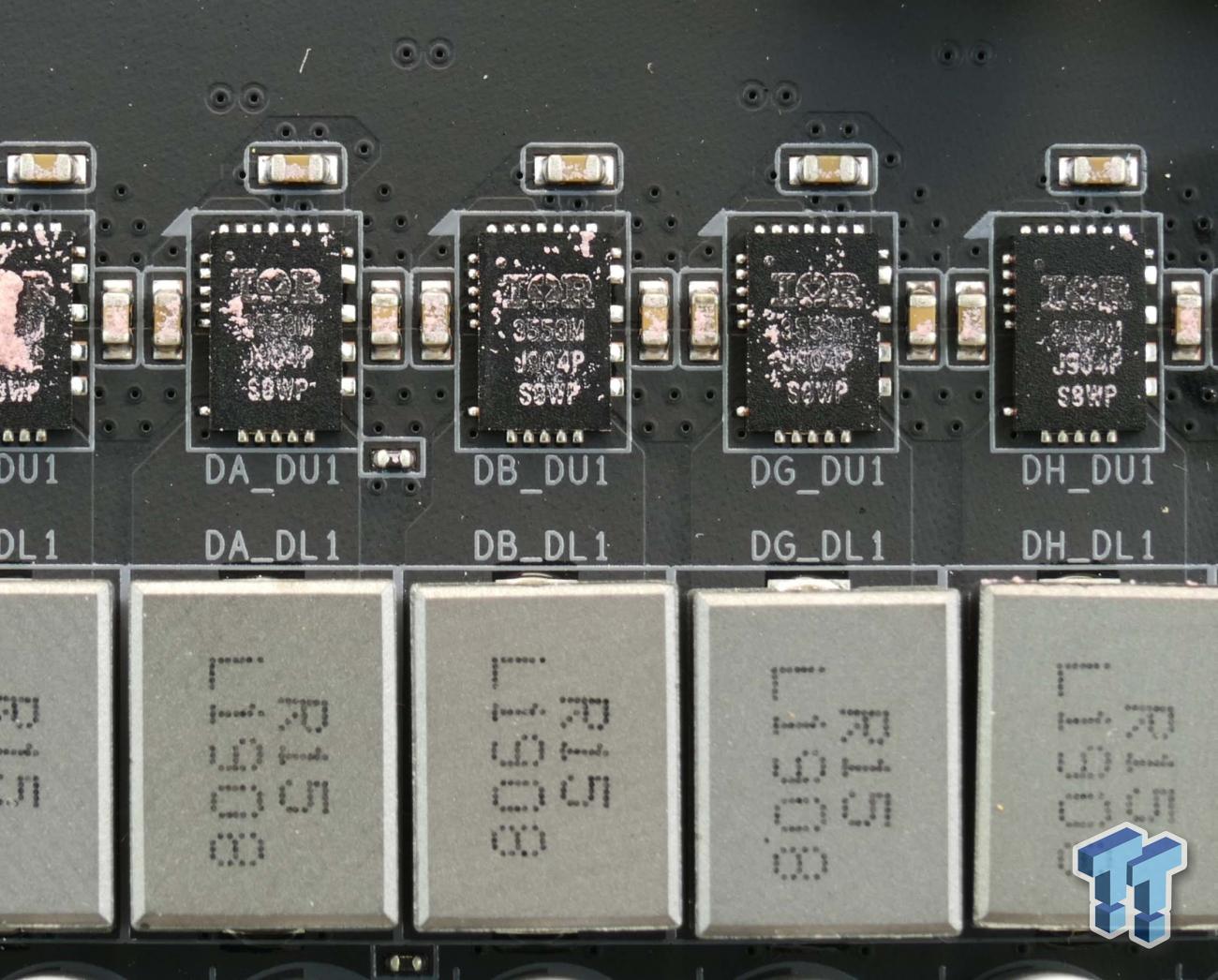 GIGABYTE is utilizing the IR digital PWM controller, the IR35201, in a 6+2 phase configuration. It uses IR3599 doublers to double up the phase count. Instead of just using one PWM channel and routing it to two phases, they are producing two separate PWM channels from one from the PWM controller.

In the end, GIGABYTE's X570 motherboard line up is extremely impressive when it comes to VRM power delivery.

Any of the motherboards covered here will be more than enough for anyone who wants to overclock their 16-core 3950X.

GIGABYTE purposefully over-engineered the VRMs and cooling for longevity and performance, and we are quite impressed with the four motherboards mentioned in this guide.