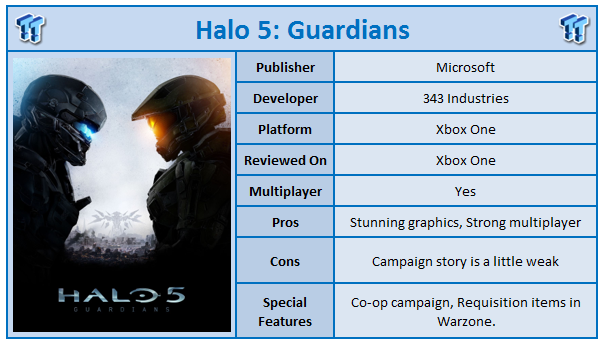 I remember the first time I saw Halo. It was E3, and Bungie was unveiling it as a PC game. The reaction was phenomenal, and may gamers today will still remember that initial trailer and the promise it showed. Little did we know that Microsoft was concocting a new console and in a masterstroke of planning took the franchise exclusively to the new platform. The Xbox had its first franchise, and there is no doubt that when gamers were picking up Xbox One consoles over the past almost two years, they had Halo on their minds and knew that one-day Chief would return. Well after the mishap of the Master Chief Collection last year, Chief is back, and he's brought some friends.

Halo 5: Guardians picks up officially eight months after the Spartan Ops mode that was present in Halo 4. Cortana has gone rogue and John 117 (otherwise known as Master Chief) and while on a mission to track her down he goes rogue and is considered AWOL. Locke (the other main character) and his team are sent to track down John 117 and bring him to justice.

The campaign in Halo 5: Guardians is somewhat disappointing. Don't get us wrong it is worth playing through but it fails to reach the highs that previous titles in the series had from a story perspective. It feels like a campaign where you are slowly going through the motions, picking off story segment after story segment to see the next inevitable cut scene. Like some of the previous titles, the game is played from two perspectives; Master Chief and Locke and the game intersperses missions with each character as you progress along. Seeing the story from both sides (and thus 'hunting the truth' as the marketing tagline said) is one of the most interesting components of the campaign story. 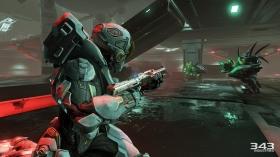 Thankfully the gameplay itself could not be starker in comparison. Beautiful graphics flood your TV screen with sixty frames per second action, and that Halo feel we all know and love. This may not be a Halo game made by Bungie, but it certainly feels like it. Enemies are smart (especially on the higher difficulty levels) and will pose a decent challenge and for those of you who tackle the game of Legendary, the brutal difficulty the series has come to be known for is present throughout.

As well as this, Halo 5: Guardians introduces a squad style of play. The game very much encourages you to play through the campaign in a cooperative manner with friends, and if you can do so, we agree that you should. However, even in the single player mode you can use the squad commands on AI teammates. One interesting facet of this is that an AI teammate can revive you if Chief/Locke succumbs to the enemy's firepower. This leaves you hammering X as you try and get an AI characters attention to help you out and in many ways makes the game easier than it needs to be. The squad mode with AI is more of a training simulator for when playing with friends that as you would expect significantly more fun to do. 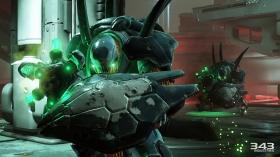 The campaign itself is also fairly short. As we played through and reached the credits, we had a feeling that it felt like one of the shorter Halo campaigns, and we were right with the playthrough clocking it at around six hours. Those of you tackling the higher difficulties will no doubt find a longer campaign to be had, but even so, that is a little disappointing considering the Halo campaigns have come to be fairly lengthy in nature.

On the other side of you coin is multiplayer, the bread and butter of the Halo franchise. This also has led to the introduction of a brand new game mode known as "Warzone." Warzone, as the name implies, drops your squad right into the heart of a war zone full of an enemy squad and AI combatants from each side.

All humans play as Spartan characters but throughout the battle other enemies such as Promethean's and covenant will arrive just to mix things up.

The Warzone mode uses a points system that extends the typical ticketing style system you see in other competitive shooters. Each character in the world is worth a point and as you earn them the points contribute to your teams score. What makes this unique is that some of the tougher characters are worth a significant amount of points and can swing battles from one side to the other in an instant. The higher tier characters are obviously a much tougher foe to defeat, but the reward is there for those who take the risk. 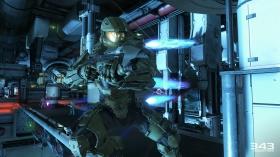 As you progress in the Warzone mode, the Req (Requisition) level will go up. The Req level is one part of what weaponry you can purchase at the start of each life. The other part that determines what you can purchase is the more controversial Req points. Req points can either be gained over time in the game, or you can buy Req packs with real-world money. Req packs come with cards that will add to your arsenal for use later. So you do not purchase the individual items you want, but more a lucky dip. It will be very interesting over time to see how the game adjusts to this because there is a chance that it could turn into a game mode that feels like it's 'pay to win.'

The other multiplayer modes make a return as well. Team Deathmatch, Slayer, and other fan favorites all make a welcome response, and we have to be honest, despite liking Warzone, we found our time more enjoyable in the Arena mode. It may just be a sense of familiarity, though. From our time with the game (and this includes post-launch) the servers have been running fine, and we have found games quite easily. 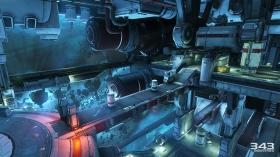 On the visual side of things, the game again has two sides. The campaign is stunning and features some of the best graphics you have ever seen let alone on the Xbox One console. It maintains sixty frames per second well, and we hardly noticed a drop in that frame rate - it's solid as a rock. It is just a beautiful game. On the multiplayer side though the game drops back to thirty frames per second and this is a bit jarring if you switch from single player to multiplayer regularly. Multiplayer very much feels like the Halo games of the past, but it's a little disappointing the campaign speed could not be carried over. The soundtrack is one of the best of the year (we even think it's worth listening to outside the game) and features a cinematic score that sits well with the action while the voice acting does the job but is nothing memorable.

Halo 5: Guardians is a game that if you are honest with yourself, one of the main reasons you purchased an Xbox One (if you already have). It is a game that brings back the famous addictive multiplayer from the Halo franchise while introducing some new and exciting options (Warzone) to the mix. The campaign may be short, but while it lasts, it plays beautifully well. It's just a real shame the story does not hit in the right places. Oh well, there is always Halo 6.