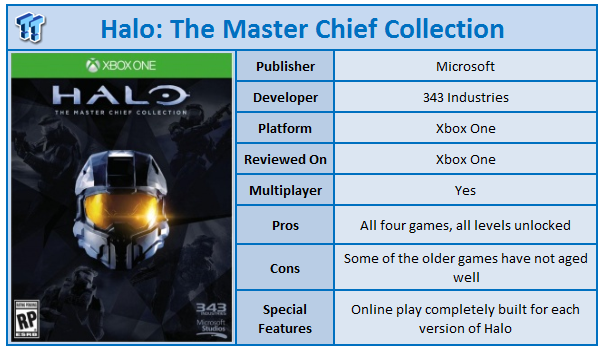 Halo has always held a special part of my gaming history. At the time of its release, I was a PC only gamer that had recently begun writing about video games and Microsoft invited me to try out their new Xbox system with Halo. I was hooked right away and Bungie had clearly proven that a first person shooter game could work on a console control system. Like me, millions of others around the globe picked up an Xbox to play the original Halo, and it has become synonymous with the Microsoft and Xbox brand names.

With the release of the third console from Microsoft, the Xbox One, it was a bit surprising to see that no Halo game was made available, and in fact, we have not seen a Halo game released since 2012. So, to fill in the game, 343 Industries has produced The Master Chief Collection. A collaboration of Halo 1 through to 4. However, if you are not a super fan, is there enough here to warrant buying the games again?

First of all, let's get the value for money argument out of the way. Halo: The Master Chief Collection is quite possibly the best value for money game you will ever purchase. It includes four of the best first person shooter games of all time, and the story so far of one of the most interesting game franchises around. Microsoft is asking you to shell out the full price for this one, but considering the content packed in (the game offers 4500 points of achievements just to give an idea of the size), that's not an unfair request in my opinion. 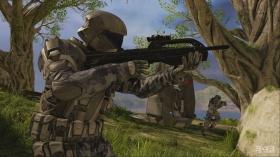 However, when you look beyond the amazing value the game offers, there are also some impressive facets. First of all, just like they did with the original Halo game, 343 Industries has gone back and rebuilt Halo 2 in an anniversary edition. Improved cut scenes, updated graphics, and just like the original Halo Anniversary, the ability to switch between the old and new graphics. However, this is limited to Halo 2 in this package and this is perhaps where some of the disappointment lies. Halo 2 is such a superior version to every other game in the package that it makes the other ones look poor in comparison. 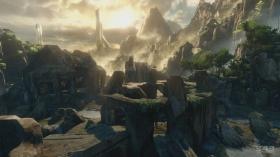 There are many things that 343 Industries did right with The Master Chief Collection and the first is apparent when you boot the game. Instead of making you slug it out, finishing each campaign one by one to unlock all the games, each game is unlocked from the outset. Not only that, each mission and each checkpoint from each mission is unlocked from the outset. This makes it really feel like a DVD box set of the 'Best of Halo'. Didn't like a mission from Halo 1? Don't play it and skip it. For the super fans, this allows you to show off the best parts you love of the series or skip to exactly what you like. For everyone else, it just means you get to skip bits that were frustrating. It was a masterful move for 343 Industries to do this.

The games can also be modified by skulls that can be found and unlocked in the game world. Instead of just playing regular halo, you can add cheats or other changes to the game world. Again this really adds to the game, especially for those who have already played through the games already and want to mix it up a little.

When it comes to the game themselves, it really comes down to this; if you have not liked Halo in the past, then obviously The Master Chief collection is not for you. However, if you do have a liking for the franchise, what you will find is a game that at times can be a mixed bag. It is awesome that all the games are included in one package at 1080p and sixty frames per second, however, some of those games, especially Halo 1, really are showing their age. At the higher resolution, some of the graphics appear blocky and outdated. This is of no surprise, but when compared to something like Halo 4 in the collection, it really does not stack up well. 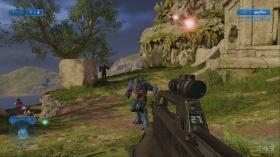 Where you will find perhaps the most value and entertainment in The Master Chief Collection is Halo 2 where 343 Industries has put in in a ton of work to bring an Xbox game up to speed for the current-generation consoles. Whilst it looks nowhere near what a Xbox One Halo game built from the ground up game will look like, it still is a significant improvement on its predecessor, and generally matches the Xbox 360 games (Halo 3 and 4) in the collection for visual prowess. Where this particular game shines is the cut scenes. Redone by Blur (a major graphics company responsible for some of the world's most famous CG scenes), the cut scenes bring home the story of Halo 2 in stunning HD.

The other area where you will find huge amounts of value and entertainment is of course the multiplayer. Whilst in comparison to some recent games, Halo does have fairly slow paced gameplay in the multiplayer arena, it still remains tons of fun to play. As well as this, not only can you mix playlists up between games (that is on one map you may play a Halo 1 based map whilst next map might be from Halo 4), but the physics and nuances from each game has carried over.

This is not a situation where 343 has built one engine and ported all the maps. They have ported all the physics and other slight differences between the game, and it shows. This offers a massive challenge when the playlists contain maps from different games because you are always having to adjust to the new style of play. That said, it is a ton of fun and perhaps the best reason to pick this game up. 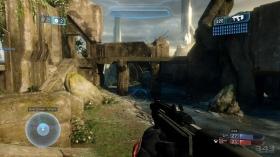 Halo The Master Chief Collection will probably end up the best value for money gaming package in 2014. It is akin to Super Mario All Stars, where one package contains the best of the franchise so far and for those new to the series, an easy way to catch up before the inevitable Halo 5 release in 2015. 343 Industries probably could have just slapped all the games together, made them work on the Xbox One and shipped the disc. Instead, they put a massive effort into Halo 2 (and all the games for that matter) and managed to get the unique nuances of each game into the multiplayer arena, offering a unique challenge that no Halo fan will be able to resist.

PRICING: You can find the Halo: The Master Chief Collection for sale below. The prices listed are valid at the time of writing but can change at any time. Click the link to see the very latest pricing for the best deal.

United States: The Halo: The Master Chief Collection retails for $50.99 at Amazon.

Canada: The Halo: The Master Chief Collection retails for CDN$68.39 at Amazon Canada.