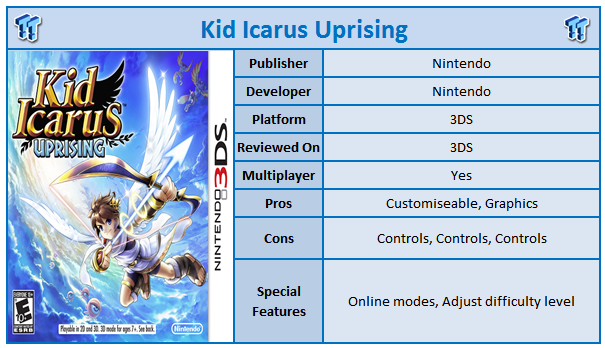 If you asked most people what the longest time between sequels in video game history was, they generally would say Duke Nukem Forever. However, that is not the case, we have a new champion. Kid Icarus has had a whopping twenty six years between drinks and in the years since there have always been rumours that Nintendo has wanted to bring Pit back to the big time - that time is finally here and on a platform that was unexpected, the Nintendo 3DS. So has the twenty six year break been kind to the series? Yes and no. Many of the changes Nintendo has implemented into the game don't do the game justice, but in other areas the game is a success.

For those of you who have never played the original NES game, Kid Icarus is set in Greek mythology and you play as Pit. A warrior destined to take down Medusa and save the world. In this new game you once again play as Pit, but for some reason Nintendo has decided to make him a kid who sprouts various annoying comments through the game. Many times you will just want Pit to shut up. Moving past that, the game is a direct sequel to the original NES game, but it has a few significant differences, as you would expect.

Whilst the original game was a platform puzzle game, Kid Icarus: Uprising is a third person shooter and features elements of games such as Panzer Dragoon Orta. At the start of each level, you begin in the air and the gameplay is a bit like space harrier where you move around the screen and have to avoid incoming fire whilst taking out enemies. You eventually move to the ground where you can directly control where Pit runs and the game offers a bit more freedom here. Finally you hit a boss character. 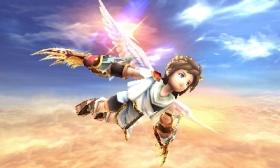 In some ways this mimics what the original game was all about. You always took on a boss to progress through the levels. The enemies from the original game have returned as well although for some reason Nintendo has seen fit to throw in Metroid's into the mix. The game also features a customizable difficulty level. Before each level you can set the intensity of the battle and to try the higher levels out, you need to have a number of hearts. Generally you cannot play the highest levels of difficulty without playing through the level first.

One of the biggest bugbears we have with the game is the control system. If you haven't got arthritis before playing Kid Icarus, you probably will by the end. In fact, the problem is so bad that with certain copies of the game, Nintendo has included a tray for the 3DS to sit on whilst you play. There are some control options you can enable to alleviate the problem such as auto fire on targets, but to play the game properly requires four hands. You have to hold the 3DS, use the thumbstick to move, use the left top trigger to fire and the stylus moves pit around. It is almost impossible and the lengthy levels do not help at all.

But perhaps the most perplexing feature of the controls is how the Circle Control Pad Pro has been used. Instead of the right stick replacing the stylus and the game becoming infinitely easier to play, it is only used to replicate the function of the left stick. This is designed for left handed people, but is an entirely missed opportunity. Clearly they wanted you to use the stylus no matter how much it breaks your hands.

One area of the game which is very impressive is how customizable it can be. You can unlock new weapons for Pit which can significantly change the gameplay and also you can merge weapons. The depth of this area of the game is quite surprising for what to be honest in most areas feels like a dumbed down game for a younger market.

Visually the game is impressive. Running flawlessly on the 3DS hardware and with some of the better graphics on the system so far, the use of 3D is incredibly good as well, offering excellent depth to the world and enemies which inhabit it. It's also clear that Nintendo is starting to get to grips with its 3D system as its one of the first games we've not had to turn the 3D down to be able to play the game. The game runs flawlessly in both 2D and 3D mode which is something not many of the 3DS games so far have managed to achieve. The voice acting is annoying due to the child-like voice, but the music suits the game well.

There is also a multiplayer mode. Focus on a light versus dark theme, in a surprise most of the multiplayer modes represent that you have seen in other third person action games. That is team style death match against each other, but also there is a ticket style system like in Battlefield. As team members are defeated, their overall life is depleted and once gone, the teams boss character appears. This is an interesting addition to the game and plays well over the Internet - something that we didn't expect to see in this title for sure.

Kid Icarus: Uprising for the 3DS has had a few surprises. None more so than how long it's taken for Nintendo to bring back one of its most loved franchises, and most wanted franchises. However, also the gameplay style and customizable options. It is a game that when you look at it on paper it appears to not have that much depth, but look under the surface and there is an incredible amount of things to do and try when playing through the game again. The controls let the game down a lot, as does the use of the Circle Pad Pro, but it is not enough for this to become a failure of a game.