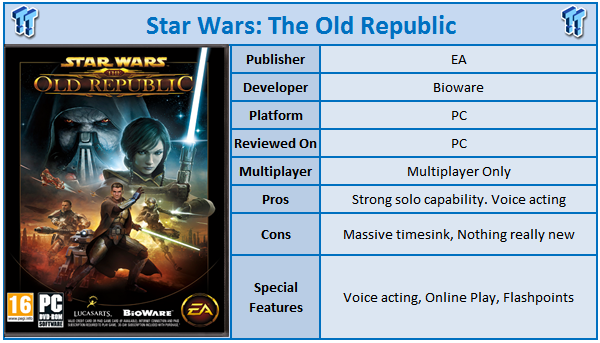 If ever there was a difficult game to review, it has to be the mega multiplayer online game for numerous reasons. First the amount of time required to see a lot of the game is significant. Significantly longer than finishing almost any other game on the market and secondly because it relies on a thriving community to be an enthralling place to be. And so with this in mind I took on the challenge of reviewing Star Wars: The Old Republic, EA's new massively multiplayer game designed to replace Star Wars Galaxies, a moderately successful MMO. But reviewing an MMO properly is something you should do six months in and so we may revisit this down the line, but for now this is our thoughts on the game as it is today.

Here is an indication of what I have played so far in the world to give you an idea behind the context and amount of depth in this review. First, I have played on both the Republic and Empire factions and each have their pros and cons. Second I have played multiple classes and advanced classes and third I have played on two different servers - one with a high population of people and one with a moderate level at this stage. I levelled one of my characters to a very high level, to end game and the others to a more moderate level and so in full disclosure I have only experienced the end game with one faction, the Empire. My final comment before I move onto actually talking about what I like and don't like about the game is that I never enjoyed World of Warcraft, take from that what you will.

Perhaps the biggest compliment that I can pay to Star Wars: The Old Republic (SWTOR) is that it has taken me by the jugular and won't let go. I am seriously invested in this world and my character now, more so than any other MMO has done before it and that was the game's first success. Another success that becomes immediately apparent is that the 'grind' does not feel like one.

SWTOR falls into the traps that many MMOs fall into such as turning into collection tasks (in other words, pick up six wolf pelts and take them to a person) but in the different characters I started with SWTOR not one of them asked me to go and do a collection style mission in the first five or so levels. Bioware has clearly realised the first 2-3 hours of your game experience with SWTOR is crucial to keeping you around. There are times where it falls back to this usual trope, but by then you are seriously addicted to the game and character so it does not really feel as bad as it has done in other MMO style games.

A lot of this feeling (that the grind has been removed) can be attributed to the fact that every piece of dialogue in the game is voice acted. So rather then moving up to an NPC character and reading a pile of text, you see a cut scene acted out and with voice acting and how much this adds to the feeling and immersion of the game is amazing. This is one key factor I have identified as to why this MMO has clicked with me and no other one has. Although towards the end game you may find yourself pressing spacebar to skip a lot of the voice acting because like anything you can have too much of a good thing.

The other thing that Bioware has managed to do very well with this game is that you constantly feel progression with your character no matter what you do. Whether you are questing, taking part in player versus player battles or just running some crew skills, you always feel like you are improving your character. And because of this, you can spend a ridiculous amount of time playing this game. The amount of times I've looked up at the clock and swore at how late it was in the last three or so weeks, I've lost count. There is a pivotal moment within the first fifteen hours or so of play where you are given a spaceship. Other games have made you purchase a spaceship, this game gives you one for playing for fifteen hours and from there (despite the level of the enemies being high on certain planets) you are free to explore the universe.

Of course an MMO relies significantly on its multiplayer portion, how many people are in the world, how easy it is to group and how well the grouping system works in the content available. And in some ways they get a pass and in others they do not. Whilst you can indicate in the player list you are looking for a group, in the early planets you will see players screaming LFG Blah blah blah (which is they are looking for a group). It's not easy without a guild to find people to play with, and this gets even worse as you progress through the game.

But to keep you coming back even as a solo player, Bioware has some key features. First of all there is eight unique stories to play through; four on the Republic and four on the Empire side of the coin. These stories intersect in some areas, but overall are unique. One boss character may be seen for example in the Imperial Agent story, but not in the Bounty Hunter story. And that means once you hit the maximum level, there is something else to go and try. Bioware is also introducing a legacy system later in the year which will have your 'main' characters directly affecting your 'alternate' characters.

Also to assist with soloing content, you gain companions very early in the game. These companions are NPC characters that basically you can control with a hot bar. In general they just beat on an enemy (DPS), take damage and maintain the enemy attention (tank) or just heal you (healer) as the fights go on. This in many ways introduces people new to the genre some of the now very established mechanics. Instead of learning what tank, dps and healers do in guilds or human groups that could lead to frustration, you have an NPC character to help you out. At the lower levels you can even solo some of the group content with them.

There is a lot to like about SWTOR already with group content. At level 10 you are introduced to the game's first flashpoint which is like a story based small operation filled with cut scenes and options to select what to say to the NPC next. The game has a 'roll' system where players are chosen randomly as to whose selection will actually be said to the NPC, and this can affect the flashpoint later on. Every five or so levels you gain access to a new flashpoint (you can access them earlier, and get wasted by enemies if you really like) and these break up the sometimes monotonous task of questing very well.

However it's not all sunshine for SWTOR at this stage. There will be times where you are on a planet and run about not seeing any other players. This is due to two reasons. One, some of the planets such as Tatooine are gigantic, second of all they only have general chat appearing when you are in the same area as the other players (generally in the world hubs such as the space ports). Many times I had the feeling I was playing a single player game.

Another thing which makes the game very unfriendly to those new to the genre is Advanced Classes. Having Advanced Classes is not a big problem, but at level 10 you need to choose this advanced class and if you get it wrong, to change it you have to start again. All we can suggest with this is research, research and research some more before making the decision. This decision will greatly affect how you play the game and how you fit into groups.

The game also makes a lot of assumptions on the player side as well. Bioware does include a few short tutorial messages as you play through the opening planet (and in reality the opening planet is a tutorial for each class), but there is nothing to help with managing rotations, choosing the best rotation or even discovering what the best weaponry out of your armoury is. As you progress through levels you will unlock a multitude of talents for your character, and have many, many key binds and for those new to the genre, it will be daunting. Again all we can suggest is research and learn. The best way to learn is to play the game, but expect frustration to ensue especially if you realise the advanced class you picked does not match your play style. 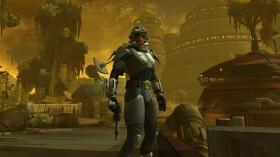 Player vs. Player is also currently a mess. Once you reach level 50 in the game you can unlock better equipment and armour for your character, but anyone under level 50 cannot use it, so level 50 characters are completely dominating PVP. However aside from that, it still plays an ok game. There are three warzones currently with one allowing same faction play (and on the servers that have population imbalance, you almost exclusively play this) and you either are an attacker or defender on Alderaan, playing Huttball as a sport, or attacking an imperial or republic force on an imperial ship. As it is we found PVP to be best to gain XP for your character relatively quickly, but aside from that it's a very frustrating experience and will remain so until the level 50s are separated out of the main PVP games.

We will continue with the game? At this stage yes. There is a huge amount of content to see, the community seems to be growing and the Star Wars universe is interesting to play in, despite the lack of Darth Vader and Yoda etc (the game is set 3000 years before the main films). The storylines are really what makes SWTOR at the moment and once that story is done if you aren't in a guild there really is nothing to do at the moment. Bioware knows this and they will fix it, but the next six months are crucial as to whether this game challenges WOW long term, or becomes yet another victim to the MMO genre.