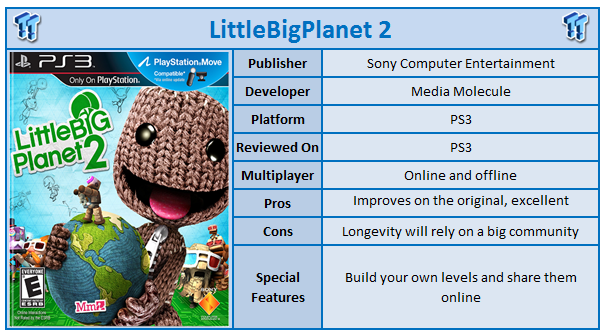 With LittleBigPlanet, Media Molecule showed the power of the PlayStation 3 console. For years Sony had told us that the PS3 system is incredibly powerful and will offer unique experiences, but it was not until LittleBigPlanet was shown that people saw something rather unique only available on the system. However, it was not without its problems. Many people did not like the floaty platforming plus the tools really only allowed platform style games and sequences to be made. Media Molecule went back to the drawing board and came up with LittleBigPlanet 2; a game that not only continues the style of the first game well, but adds so many options and tools that it is potentially the first truly 'must try' game of 2011.

In LittleBigPlanet 2 you once again take control of Sackboy (or Sackgirl). Sackboy came to represent not only LBP, but also the PlayStation 3 over time and so it is of no surprise he is back. The game begins in the sackworld version of Leonardo DaVinci's house. You as Sackboy are asked to join the Allegiance with Leonardo, but first you must take on some tasks; after which you move onto various worlds trying to solve problems which have befallen them.

As you would expect, each world in the game is unique and offers new challenges. One of the main criticisms we had of the original LittleBigPlanet was that the difficulty level rose significantly at one point in the game and the level balancing was not great. This is generally fixed in LBP 2 with the main core levels offering a challenge without ever making you really want to smash a controller. 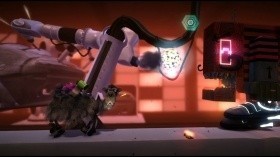 LittleBigPlanet 2 also introduces new tools for Sackboy to use such as a grappling hook and grabbing gloves. This allows you to manipulate the world a lot more than in the past. Rather than just being able to push small boxes around, in the sequel Sackboy with the right tools can latch onto objects as well as throw items around to solve puzzles. These tools form the core of the puzzles within the game and many of the puzzles do force you to think beyond usual platforming gameplay.

However, where the game has found most of its improvement is in the community features. Whenever you load a level in single player or one of the many custom levels online, and others are playing it, you will be asked if you wish to join them. If you do you will find yourself playing with other players within an instant, running around the worlds trying to solve puzzles. There is still the option to play by yourself should you so desire, however. You can still build levels together and there is more encouragement to play with others with some levels having certain areas only accessible when two or more sackboys are present.

Even when the game is boiled down to its platforming core, it is still significantly improved. Whereas in the first game we felt we were going through the motions a bit moving from A to B, we have generally found the levels in LittleBigPlanet 2 to be interesting and fun to play. You will find puzzles are now a lot more commonplace such as having a switch to turn off an electric current, as well as jumping puzzles and puzzles which involve objects. The great thing is these puzzles are far from brain benders and you generally will not get stuck, giving you the satisfaction of beating a puzzle without tearing your hair out.

The longevity of LittleBigPlanet was determined by the ease of use of its tool set which was one of the games highlights. LittleBigPlanet 2 is no different; however, it is now possible to build all sorts of different games.

Already on the PSN network you will find games which mimic micro machines, Silent Scope and Left 4 Dead amongst others. The fact that these games can be envisioned in the LBP world proves the power of the tools. They are also easy to use. Jump in, start placing objects, add some gears and play. That won't give you the best level of course, and to do something truly special will take hours if not days or weeks, but it is easy to get into and learn.

The levels which the community are building already show the power of the engine and tool set well. It is also a lot easier to find these levels in the sequel with Media Molecule adding filters on search as well as choosing some of their favourite levels. There is also a web interface accessible on PC to search for levels which makes it a lot easier to find other levels people are recommending and you can queue them for download as well.

The game continues its cartoon style in the visual department with larger than life and unique and interesting characters present. Nothing in the LBP world is taken seriously and nor it should be with bold bright colours. It is clear to us that Media Molecule has refined the graphics engine even further of the game as the colours are more crisp and vibrant. Sackboy still has his problems with jumping and those who didn't like it in the first game will still find it somewhat problematic here, but overall the game looks beautiful.

LittleBigPlanet 2 is a fantastic refinement of something that was already a fantastic game. The ability to build your own levels basically means that you really get out of this game what you put in. It is a community driven game where success will be driven by that community and how well it builds levels and how quickly. From early evidence this will not be a problem, however, and LittleBigPlanet 2 is sure to continue to be one of the best games on the PlayStation 3 system. As long as the community keeps pumping out fantastic levels, you could spend a long, long time in this game. Highly recommended.