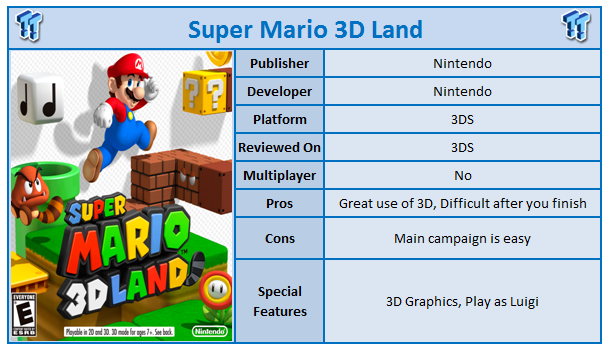 Up until recent times Mario had been significantly split into 2D and 3D style games. If you were on the handheld systems, a 2D experience awaited, whilst on the big boy consoles you got the 3D worlds with a focus on exploration and not rushing through the levels. Nintendo has tried to combine the best of both worlds so to speak with the 3DS Mario game and succeeds in so many ways. Super Mario 3D Land is one of the best Mario games ever made and is everything the evolution that Nintendo has made it out to be. This game finally shows why 3D on a handheld system can matter.

For those of you who currently cringe at the thought of 3D gaming on the 3DS due to eyestrain, you should fear not. For us this was the first game we were able to run in full 3D without a problem and it finally seems like the developers are sorting this problem out and it could not have happened for a better game, because it's the 3D style that makes Super Mario 3D Land such an excellent game. 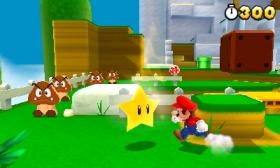 Typical Mario fare is found for most of the game where the aim is to get from one side of the map to the other and capture a flag (and eventually rescue the princess from Bowser). But Mario Land 3D manages to mix things up in many ways. First of all, at certain points during the campaign you are required to have collected enough gold coins to progress. This puts a lot more emphasis on exploring in Super Mario 3D Land and in many ways despite being frustrating potentially to handheld users, is a masterstroke. It makes you look at almost all of the level trying to find the coins, and in the hidden areas is where the best and most challenging 'puzzles' of Super Mario 3D Land can be found.

As well as this, the game introduces some new and interesting powerups. The tanooki suit returns from Super Mario Brothers 3 and given the 3D style of the game, fits well. But perhaps the most interesting addition is a box with a propeller on it, allowing Mario to burst into the air and gain even more air if he manages to land on a floating enemy. And in continuing their recent tradition of focusing on the casual gamers, if you fail on a level six times a white tanooki suit becomes available which basically makes Mario invulnerable for the entirety of that level and if you still continue to fail, you get a powerup which will take you right to the flag. This obviously somewhat reduces the challenge of the game, but it's good to see Nintendo still looking after the casuals.

However, once you complete the game you unlock the special worlds and this is where Nintendo really hands hardcore gamers a real challenge. Special Worlds are the Super Mario we have come to know and love and you will die, and die and die again many times before finishing that side of the game. The white tanooki suit is not available in the special worlds which is a clear indication this is where Nintendo wanted the challenge to lie.

The world of Super Mario 3D Land is highly detailed and variable. Some levels are set under the sea, whilst others in the clouds. Each world has a specific theme to it and the challenge ramps up based on this as you progress. One thing that becomes very important in the 3D game is the shadows the objects eminate. These shadows help give you a sense of perspective to the level and to ensure that the 3D does not throw you, in some sections, Nintendo allow you to change the 3D perspective with the DPAD on the fly. And although it's not as impressive, the game is entirely playable with the 3D graphics turned off.

Super Mario 3D Land is in many ways the first game to really show what the 3DS is all about and how it can improve the handheld experience. The new challenge of perspective and depth that comes with Super Mario 3D Land is one of the best additions to the series in a long time, and the combination of 2D and 3D gameplay from the handheld and console systems respectively has worked incredibly well. If you own a 3DS, you simply must own this game! 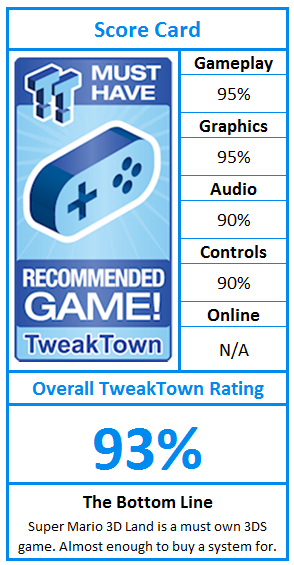