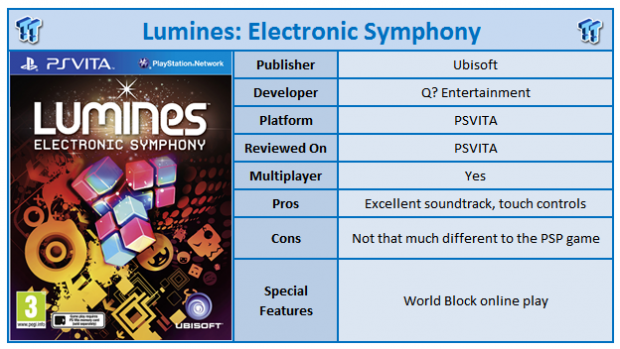 When it comes to musical rhythm games, Q entertainment knows what they are doing. First launching with the PSP, Lumines has become a classic gaming hit due to its addictive gameplay, fantastic soundtrack and suitability for portable gameplay. With the launch of the PlayStation Vita, Q? entertainment have gone back to the well along with Ubisoft and crafted Electronic Symphony. Whilst the core of the Lumines franchise remains the same, there is enough in this package to justify yet another purchase of this fantastic series.

For those who may have never played a Lumines game, the aim is to build blocks of the same colour that will then eliminate them. It works a bit like Tetris aside from the fact that you are matching colours not building lines. As those colours match, the lines will eliminate and the music may change, depending on how far into the level you are. 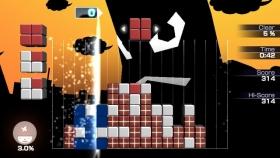 Lumines: Electronic Symphony introduces touch gameplay for the first time. Whilst most of the game can be controlled by the regular controls of the PlayStation Vita, you can if you wish move the blocks via the touch screen. This sometimes can feel a bit more intuitive than the regular controls, but we found a combination of both was the best solution. One frustrating aspect about this is that the menus force you to use the touch screen.

Lumines: Electronic Symphony also introduces game modes other than the main journey mode. In the journey mode you continue through various themes and soundtracks until you fail. As you reach those songs, they are unlocked for use in other game modes and to say Lumines: Electronic Symphony has a brilliant soundtrack is an understatement. Songs include the brilliant "Played-A-Live by Safri Duo" (which fits the Lumines world incredibly well), "Hey Boy Hey Girl" by the Chemical Brothers and "Yesterday when I was Mad" by the Pet Shop Boys to name just a few.

As well as the journey mode, Lumines: Electronic Symphony includes some unique game modes that are new to the series. One of the more interesting modes is the world block. Each day, the game will generate a huge block full of Lumines blocks. As players are online and playing the game, the block reduces in size until it disappears. If you contribute to the destruction of the block, you gain experience that can unlock new weapons for you to use in the journey mode.

There is also the ability to play through the themes by themselves to up your score and also against the clock where you try and score as many points as possible in the time frame that you set. These modes are perfect for pick up and play. Whereas with the journey mode you can be going for half an hour or more if you get on a roll (making it not the most suitable for mode for short trips), you can set a limit of say six minutes so you know when the game will finish. And if you want to take the game to the next level it also has a master mode where the blocks come faster and the chains are not as easy to create.

Visually Lumines: Electronic Symphony is impressive. Although the PSP game did very well for the technology, the PlayStation Vita takes this to the next level with some visual effects that really bring home the visual and aural experience of the game. It's as much about how the game looks as to how it sounds which leads to the addictive nature of the game. The soundtrack as mentioned before is one of the game's best features and even if you don't like the soundtrack when looking at a list, it will probably grow on you over time, especially once the addictive gameplay gets to you.

Lumines: Electronic Symphony is very much like the old games and in some ways that can be seen as a negative. However, Lumines has always been a game that relies so much on its addictive nature and familiarity that it's hard to see where they could have improved the game. The changes on Vita including the world block and the touch screen controls may not be enough to consider the game value enough if you already have the old games, but on its own, Lumines: Electronic Symphony is a fantastic PlayStation Vita game.