All NewsBusiness, Financial & LegalCases, Cooling & PSUContests & GiveawaysCPU, APU & ChipsetsDealsDisplays & ProjectorsGamingMotherboardsScience, Space & RoboticsStorageVideo CardsVirtual & Augmented Reality
All ReviewsAll ArticlesAudio, Sound & SpeakersCases, Cooling & PSUCPUs, Chipsets & SoCsComputer SystemsDisplays & ProjectorsGamingMotherboardsNetworkingPeripheralsRAMStorageVideo Cards
GuidesGamingAsk the ExpertsNewsletterAboutForums
RTX 3090 TiRTX 4090Diablo 2GTA 6Halo InfiniteElon MuskRTX 3080HDMI 2.1
Mercenaries 2; a bad game? a good game? - It all depends on what side of the fence you were on. Pandemic built one of the most ambitious games of all time with Mercenaries 2 but unfortunately it didn't pay off. Huge bugs, poor frame rate and quite frankly last generation graphics had gamers wondering what went wrong after the hot first game. However, Pandemic had built a rather nifty engine which with a little work would knock the socks off people. The Saboteur is the fruit of that labour. A remix of Mercenaries is one way to describe it; another is to describe it as GTA World War II and while it may not be the most original game around, it is definitely worth playing.

In The Saboteur you play as a lone Irishman, Sean Devlin in Paris during the German occupation. One evening while sitting in a burlesque bar in an upper class area of Paris, Sean is accosted by a member of the French resistance, Luc, and asked to join them. Although initially reluctant as a flashback gameplay sequence early on in the game shows, Sean has every right to want to rid the Germans out of Paris and so joins the resistance and the mayhem begins. The story is full of cliches and often straddles a line of immaturity in writing, especially when dealing with sexualised moments. But it does somehow come together in the end. 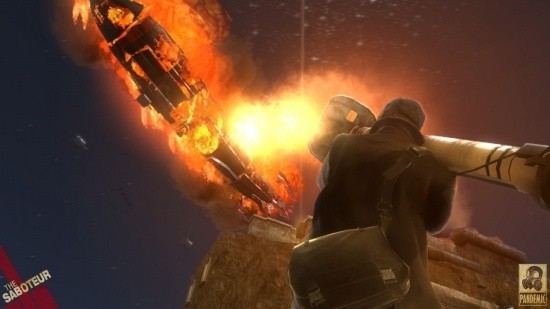 The Saboteur is played from a third person perspective in an open world, very much like that of GTA. You approach a character, gain a mission, complete that mission and gain contraband. Contraband is the games currency instead of money and this can come from blowing up German installations and outposts, through to winning races and completing missions. Only a few times in the game are you forced to spend or use Contraband, but it can come in handy for weapons and the like from black market dealers.

The atmosphere and environments of The Saboteur are definitely its finest moment. One of the best elements of the game is the discolouration which occurs in the city at first. Each German occupied part of Paris is displayed in black and white. When we played this felt ominous and depressing and we wanted to get out of there quick. As Sean completes missions, new areas of Paris become liberated and return to full colour until near the end of the game where the entire map is virtually bright and fluffy. 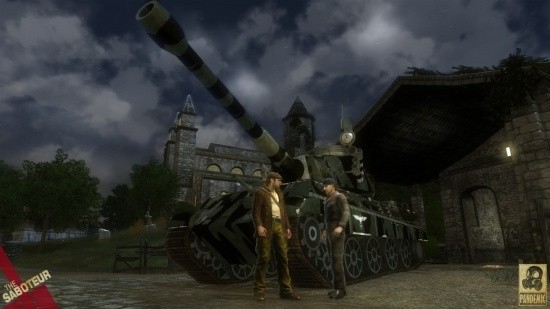 It's not just the cities that benefit from completing missions either. As you complete missions and liberate Paris further, the resistance gains more members until such time that you can actually call on these members to fight for you. In a nod to GTA, the game has levels of alarm system where as you perform more and more illegal things, the presence gets larger until the time where you have a few zeppelins chasing you. That might be the time to call on the resistance who at certain points can help you ambush the Germans. Kill enough of them and they will give up. It's a nice change from the run, run, run of other open world games once the cops get wind of you.

The other thing is that generally Pandemic has kept The Saboteur grounded. A lot of the missions could have actually occurred during the war and each mission usually has two or three ways it can be completed. Do you go in all guns a'blazing or take out a German soldier behind the scenes and change into their clothing? Get too close while disguised and they will discover you and the poop will hit the fan big time.

One thing that frustrated us was despite most missions having multiple ways to finish them, clearly Pandemic had one way in mind. Many times we'd try and try a mission only to then try something else and beat it first time. You can climb on buildings in this game to sneak up on enemies and enemy emplacements and you will do this many times before the game is finished. The story lasts around 10-12 hours if you power straight through it, but there is a whole lot of side missions and things to blow up before you truly finish the game. 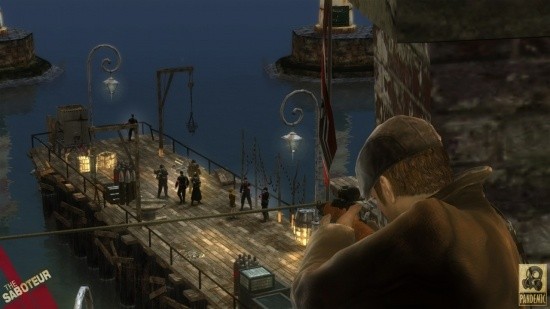 The graphics also are not all that much to write about. The game does maintain a stable framerate most of the time on the Xbox 360 version, but they are nowhere near what you would expect from this generation despite being a clear update on the Mercenaries 2 engine. Blowing pretty much everything up is a whole lot of fun, though, and the environments are quite destructible, leading to some truly memorable moments. The sound on the other hand is extremely well done; cheesy voice acting which suits the story well and a soundtrack with licensed tunes ripped straight from the era. This adds to the atmosphere immensely.

While The Saboteur is in no way a contender for game of the year, Pandemic has done enough to warrant at least a look. The game is interesting, well put together and has some of the most atmospheric game play you will see in 2009. The game reminds us a lot of Mafia by 2k. That game garnered critical acclaim for its story telling, environment and way it was grounded in reality. The Saboteur could gain the same applause from the audience if the chips fall right. We can't help but feel this is a game EA should have released in a June/July quiet time, but even so, we have no problem in recommending at least a rental of this game as it just oozes atmosphere from the get go.