NVIDIA had some exciting news with its new Reflex technology that was unveiled during its Ampere reveal, where we learned about -- and then got to see how awesome the new GeForce RTX 3080 and RTX 3090 graphics cards were. 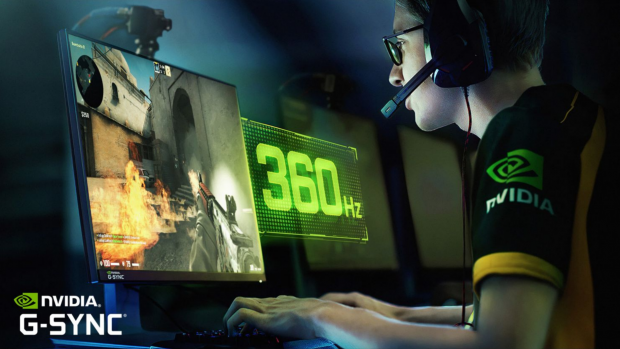 NVIDIA reached out and asked if I would like to play around with their new Reflex Latency Analyzer technology, which is a big part of the exciting new 360Hz (yes, 360FPS -- 360 frames per second) gaming monitors. The company sent me out everything required for the testing, and away I went.

First off, the NVIDIA Reflex Latency Analyzer is a tool that is built directly into the new wave of 360Hz G-SYNC esports displays that -- instead of requiring over $7000 worth of high-end equipment and many hours of configuration and testing -- can precisely measure your latency.

What is NVIDIA Reflex

NVIDIA Reflex is a suite of technologies that were built by NVIDIA to optimize, and measure system latency in competitive games. Most people won't need this -- but esports stars, game streamers, and enthusiasts will want to deep dive into this exact suite of tools.

You can go for a full deep dive into NVIDIA Reflex here.

Do You Have NVIDIA Reflex?

If you've got one of these series cards, you'll be ready for Reflex:

NVIDIA sent over the fastest gaming monitor in the world over to test, with the ASUS ROG Strix PG259QNR -- offering a totally next-gen dual-driver IPS panel that the company collaborated with AU Optronics on. The new dual-driver IPS panel is a next-gen IPS panel that offers super-fast, consistent response times and color levels across the entire panel -- most importantly, even at the huge 360Hz refresh rates. 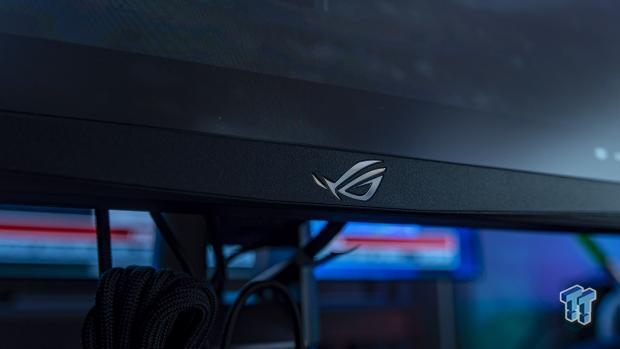 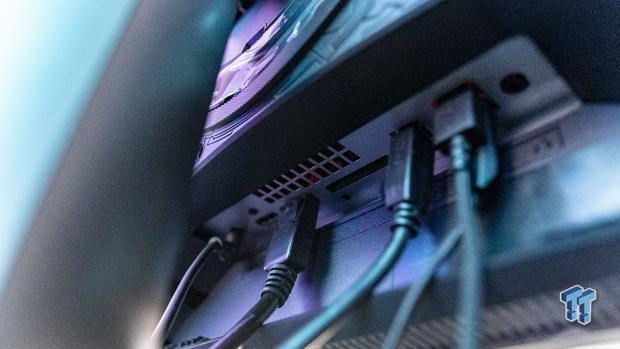 From left to right we have the power, DisplayPort, USB host, and then 2 x gaming mice plugged directly into the monitor. I'm using the ASUS ROG Chakram Core alongside the Razer DeathAdder v2 Pro gaming mice here. 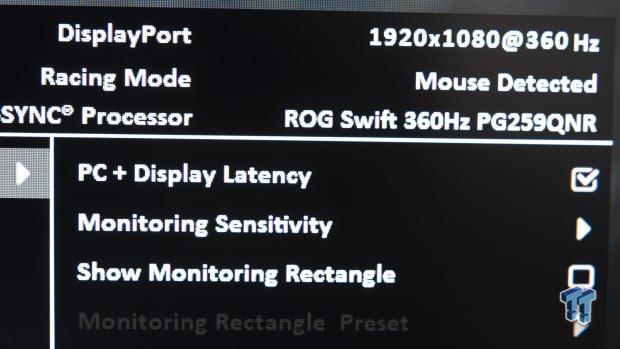 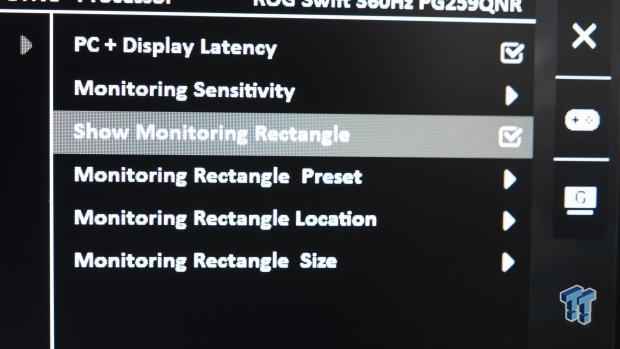 My take on NVIDIA Reflex won't be so much about the pure statistics built into the monitor, but rather how it applies to me -- an enthusiast. I love seeing the stats of my hardware when I'm gaming, but nothing over the top. 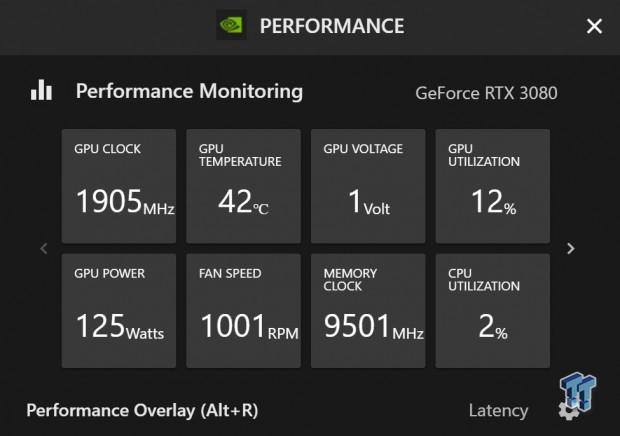 I like to have the CPU, RAM, GPU (temp, GPU usage, VRAM usage) stats when gaming. Nothing too much, but enough to see that my hardware is ticking along nicely. Of course, I have my FPS counter enabled in all games -- but there are times when I'm setting up a new system and would love more stats -- that's where NVIDIA Reflex steps in.

I surround myself with high refresh rate monitors, always have -- I have spent a ridiculous amount of money over the last 20 years on displays than I care to admit. But it gives me a good insight into latency in games, as I can instantly feel and recognize a lower refresh panel (say 60Hz, or even 120Hz versus 240Hz or higher). 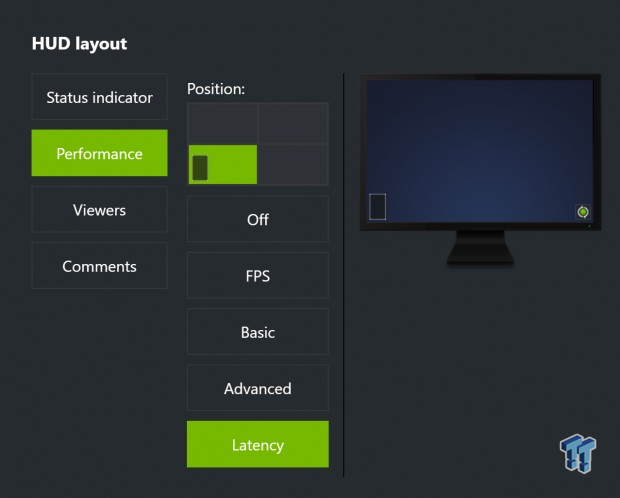 But at the end of the day it's not just display refresh rates, there are other point of latency that can create problems -- and in order to measure that you need $7000+ worth of equipment. NVIDIA skips all of that, providing users and benchmarkers like me with a system to measure latency without that massively expensive equipment.

NVIDIA builds in the new Reflex Latency Analyzer into the NVIDIA 360Hz G-SYNC displays, which I have here -- and will be available to consumers in the fall -- captures the entire system latency and provides a precise measure of your PC's reaction time. This makes it as accurate as a super-fast, and very expensive 1000FPS camera.

Why would you use this? To tweak and tune your gaming PC for the ultimate in response time... beyond important for competitive gamers and enthusiasts. 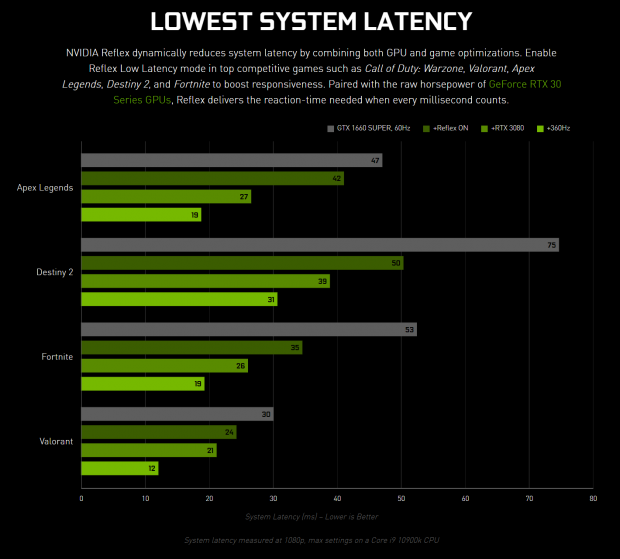 If you've got a higher-end graphics card like the new Ampere-based GeForce RTX 3080, then Reflex allows you to game at higher resolutions with the same, if not better responsiveness. This means that in something like Fortnite, you can play at 4K with the responsiveness of 1440p, or at 1440p with the hyper-fast responsiveness of 1080p.

If you've got NVIDIA Ultra Low Latency mode enabled, in a game that supports it -- like Valorant, then you're looking at some ridiculously low system latencies at under 12ms if you've got the right hardware.

Destiny 2 also enjoys some reductions, too.

Now THIS is right up my alley -- NVIDIA's new Performance Overlay built into GeForce Experience, is incredible. It's a very detailed run down of what is going on with your system, and has been totally tweaked for Reflex. You can enable the Reflex option on the Performance Overlay in GFE, getting access to the following data in real-time:

I installed and tweaked GeForce Experience, enabled the Reflex feature in Performance Overlay in GeForce Experience -- and jumped into (to play) two games: Fortnite and Call of Duty: Warzone. After enabling all of the settings required, I would reboot between testing with Reflex and Ultra Low Latency enabled.

Some games have Reflex and Reflex Low Latency options that you need to enable, with Fortnite having Latency Markers, NVIDIA Reflex Low Latency, Latency Flash -- and for HUD options you also have Latency Debug Stats so you can get the ultimate nerd out of stats. 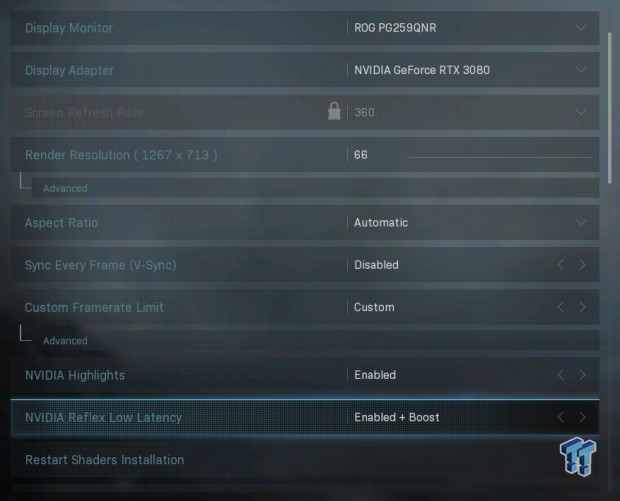 In Call of Duty: Warzone you'll have to enable NVIDIA Reflex Low Latency (which has the options of being disabled, being turned ON, and then ON + BOOST).

I pumped many hours into playing Call of Duty: Warzone on the 360Hz monitor with NVIDIA Reflex Low Latency (both enabled + BOOST) and loved every moment of it. It is a ridiculous monitor at 360Hz, and no GPU hardware on the planet can handle 360FPS in Call of Duty.

But, the NVIDIA Reflex technology enabled with BOOST -- is an experience that is unmatched. 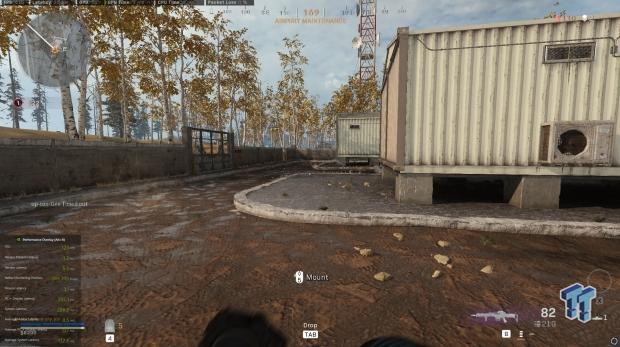 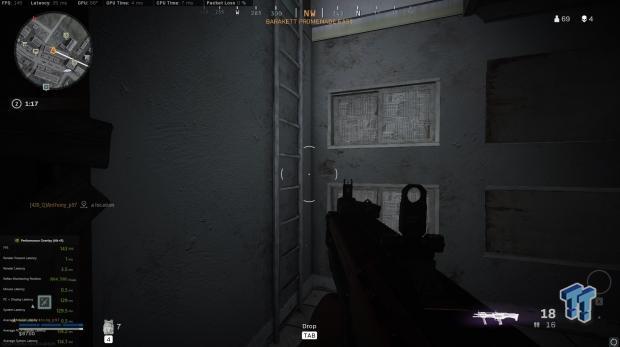 As you can see, you get some glorious stats to check over. There's a lot of latency-related stuff here, giving people who want it, every single detail possible. We have everything from the Render Preset Latency through to the Average PC + Display Latency and even the total System Latency.

Seeing the Render Preset Latency sitting somewhere in the 1ms range is beautiful -- beyond describable smoothness in Call of Duty: Warzone. It's something that you need to simply try in person, I cannot describe how smooth it is. It's almost like how they describe the Matrix... you have to experience it for yourself.

NVIDIA Reflex is another great free upgrade for gamers, that gets built right into an already great foundation that is GeForce Experience. The Performance Overlay is awesome on its own, but Reflex is like steroids to your stats.

Being able to measure and test system latency without super-expensive hardware is great -- but it is not for everyone. If you spend the money on a ridiculously fast 360Hz G-SYNC esports display, then having the Reflex Latency Analyzer built into your monitor and GFE is a Godsend.

The entire esports market is continuing to expand so testing latency becomes a much more important tool, and there are scenarios where this is a game changer. There are esports events where millions of dollars are on the table, so a new milliseconds in latency can mean the difference between a win, and a loss -- between millions of dollars and first place, and not.

In a world where we return to somewhat normal with in-person esports tournaments and events, NVIDIA now exclusively offers esports gamers and companies to deploy GeForce-powered gaming PCs with pinpoint latency. You will of course require the new 360Hz G-SYNC displays, but you would have instantly-calibrated lightning-fast latency on every PC.

This is a very big deal with NVIDIA leading in esports games, having Day One drivers, optimizations, and constant improvements to gigantic esports games like Fortnite, Apex Legends, Call of Duty: Modern Warfare, Valorant, and so many more. NVIDIA Reflex is being added to these games and that is a big deal on its own -- these games are played by 100s of millions of gamers.

I pumped in some hours of playing Call of Duty: Modern Warfare and Warzone with NVIDIA Reflex (+BOOST) on and it was liquid smooth. I don't think I've ever had something feel that smooth when gaming before, and I've tested everything right up to a 280Hz refresh monitor.

The 360Hz dual-driver IPS panel mixed with NVIDIA Reflex is out of this world, it's the very fastest gaming experience I've ever had -- improved again when you can get close to 300FPS+ in something like Fortnite. Running around in Fortnite at over 300FPS with NVIDIA Reflex enabled was incredible.