AMD Athlon 64 has to be one of the most diverse CPU platforms when it comes to its socket layouts. Originally starting off as a Socket 754 single channel memory design for the desktop and a Socket 940 for servers, this soon changed to include a 939 variant for the desktop with dual channel memory. Socket 754 stayed for the value-end with Sempron and Socket 940 for servers.

AMD Athlon 64 has once again been given another socket, but this time AMD is retiring its previous two desktop sockets - namely Socket 754 and 939 - and replacing it with a single Socket AM2 based on a 940-pin layout arrangement.

In server markets, AMD is also going to retire the Socket 940 Opterons in due time to make way for the LGA based Opterons giving AMD only two sockets to worry about. Intel recently had Socket 478 and 775 but now only 775 exist for desktops in new CPU's and soon to see the end of 604 in servers for LGA771.

AM2 is a new socket and hence it does add one new feature to the mix for AMD Athlon 64 and AMD Sempron based on this new socket - that being DDR-2 memory support. Today we are going to pit an AMD Athlon 64 X2 3800 AM2 against a similarly clocked Socket 939 CPU to see just what, if any, gains come from the new memory interface for AM2 based processors.

What AM2 brings to the table

AMD Athlon 64 series processors on the new AM2 sockets have very little in the way of architecture changes. The pipeline count, cache sizes and bus speeds all remain the same - only two changes have occurred.

The first is all AM2 based processors now incorporate a Dual Channel DDR-2 memory controller that officially supports up to DDR2-800 memory modules. The second change is a unified Socket Architecture. AMD is moving all of its CPU's over to AM2, this includes Athlon 64, Athlon 64 X2, Athlon 64 FX and Sempron - that's right, Sempron is going AM2 as well. This means a new change to Sempron, firstly a socket change from 754 to AM2 as well as a Dual Channel DDR2 memory controller. 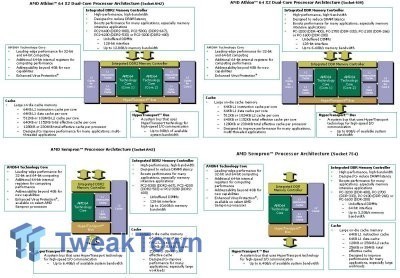 From the block diagram you can see that the Athlon 64 architecture doesn't change apart from a new socket and DDR-2 memory controller. It is the Sempron series that gets the biggest upgrade, that from single channel DDR to Dual Channel DDR-2. 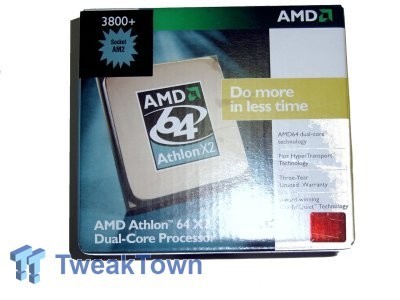 The CPU we have on display today and for our future AM2 test bed is a 3800+ Athlon 64 X2 CPU clocked at 2GHz from the factory. The packaging that AMD places the CPU in is somewhat smaller than previous AMD Athlon 64 X2 boxes. On the front the clock speed is clearly marked as well as the Socket used, so you don't get confused. 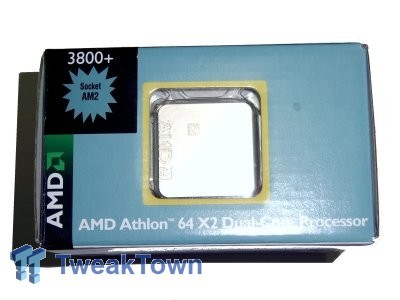 If you are one who likes to look up the CPU codes before you buy, AMD places the CPU view window on the side of the box where you can clearly see the code, prefect for the researching overclockers who want certain manufacturing coded processors. 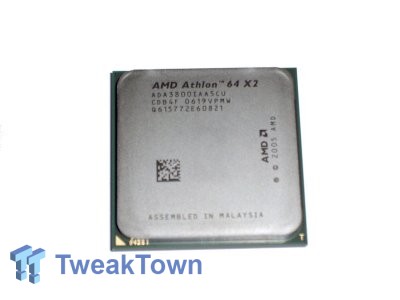 The top of the CPU looks like any AMD Athlon 64 based CPU. There is no socket name on the top to identify it as AM2; only in the code does it tell you this. 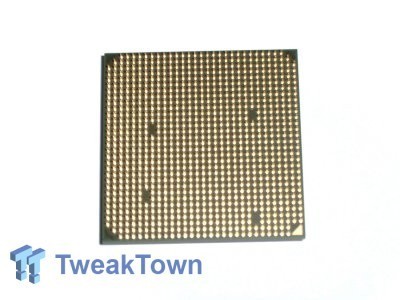 The bottom of the CPU almost looks like a Socket 939 processor; however, there are a total of 940 pins. While there are 940 pins like an Opteron CPU, the arrangement is different so you can't place this CPU into an Opteron board or place an Opteron CPU in an AM2 board. 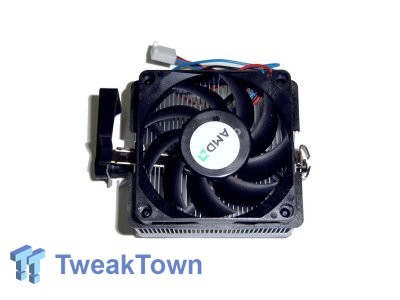 Lastly we have the CPU cooler AMD boxes with its AM2 processors. The cooler has changed only slightly in that the clamp has changed to fit AM2's new retention design.


In this article we will compare Socket 939 vs. Socket AM2. While we do have differently clocked processors, we clocked the 4200+ Socket 939 CPU back to 2GHz using multiplier reduction, giving us a 3800+ clock speed on the 939 platform.

We also overclocked the AM2 CPU to its max of 267MHz x10 giving us 2.67GHz CPU - hence making it a little quicker than a more expensive 5000+ processor. This was also replicated on the Socket 939 platform to determine what, if any, overclocking gives to the AM2 socket platform in terms of added performance.

So will we see any performance difference with AMD moving from DDR to DDR-2 - let's continue on and find out!

CPU tests show no difference between the two architectures. Memory bandwidth goes up slightly with the AM2 due to a more robust amount of memory bandwidth supplied by DDR-2.

Again no change is CPU scores but memory gains a little - the overall score is not a resounding victory for AM2 but it does gain a few more points.

Raw number crunching we see that the AM2 and 939 at similar clocks are identical in performance; Overclocking helps the AM2 gain a couple of seconds on the 939 but not a lot.

Pi Fast is an easy-to-use package written by Xavier Gourdon to compute Pi with a very large number of digits. We set the program to time how long it takes to compute 10 million.

Pi Fast also is simply raw numbers through the CPU - very little is dependant on RAM and this results in the AM2 and 939 scoring the same. 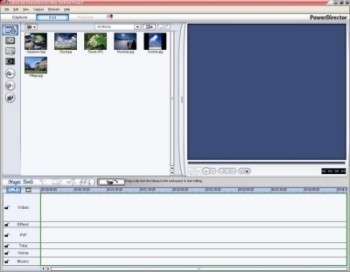 CyberLink Power Director produces video files for creating DVD, DivX, XviD and WMV files for use on your PC. Using the built in software we encode files from MPEG2 (DVD) format to DivX format and use the time taken, average FPS and CPU usage for our benchmarking usage.

Encoding doesn't really use much memory bandwidth, more on the CPU and HDD. To this end there is little difference between the AM2 and the 939 CPU.

3DMark05 gives just a little ground to the AM2 CPU in both stock and overclocked speeds.

Again we see very little difference between the two platforms.

In our first real world benchmark the AM2 just outscores the 939, but not enough for us to say change platforms.

Quake 4 shows similar results to Doom 3 since they are both based on the same game engine.

F.E.A.R. is more graphics intense than CPU or memory so we do see a limiting factor of the graphics card here.

While Far Cry is now one of our older benchmarking games, it is still able to put pressure on most computers systems. Utilizing PS2.0 technology with the latest versions supporting Shader Model 3.0 with DX9c and offering an exceptional visual experience, there is no denying that even some of the faster graphics cards get a bit of a workout.

Our last test shows us that there is a little advantage here to the AM2 platform over the older Socket 939 platform.

AMD's push towards AM2 can only be considered a unification of the AMD K8 architecture to a single socket platform. Both the fundamental architecture remains the same only a change in memory technology has been adopted.

Clock for clock performance on the AMD Athlon 64 X2 939 and the AM2 models are almost identical and only a few points in each tests give the overall win to the AM2, by a very small margin. If you currently have a 939 based CPU, and were wondering if AM2 will give you any extra power, the answer is simply "no!" - It is just not worth the upgrade. For new users who want to migrate to AMD, then yes put yourself down for AM2, as 939 and 754 are on the way to the extinct pile.

AMD's only major benefit is the Sempron series of CPU. This is the one with the most to gain, with an upgrade from a single channel DDR memory controller to a Dual Channel DDR-2 memory controller. We are bound to see some performance increases on this platform, which we hope to test for you in the coming months.

Our final words, if you have a high speed Socket 939 based processor, don't bother going and buying a new board, RAM and CPU as the dollars spent now won't give you a performance upgrade. For new users, get the Socket AM2 over 939. You will be somewhat more future proof (DDR-3 will be ready around the second half of 2007) plus gain a little performance advantage over the older platform and with AMD's recent price cuts to combat Intel's latest Conroe beast, the price of Socket AM2 and 939 processors are the same.