One of the great things about Overwatch is the long-term plan for tons of free content, the next bit of which is a new map. Going by the name of Eichenwalde, it's set in a beautiful German city and sees attackers storming a castle. Overall, it serves well as a unique addition to the already strong and varied lineup. 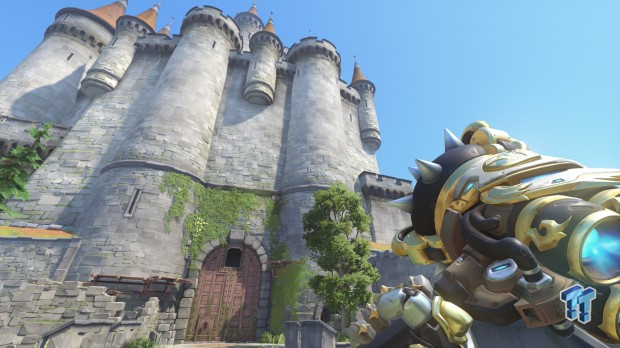 The map is available now to try out now on the Public Test Realm (PTR), alongside a ton of balance changes, but if you can't be bothered with that, this article is for you.

Quizzically, Eichenwalde is a standard Control-Payload hybrid map. Given the payload itself is a battering RAM that breaks down the door to a castle, you'd think you'd start with it, and once you get inside, it would switch to Control, and you would attempt to lay claim to the castle. But nope, you must capture a point first, then just keep on trucking with the payload until it ends up awkwardly at the feet of a fallen king. 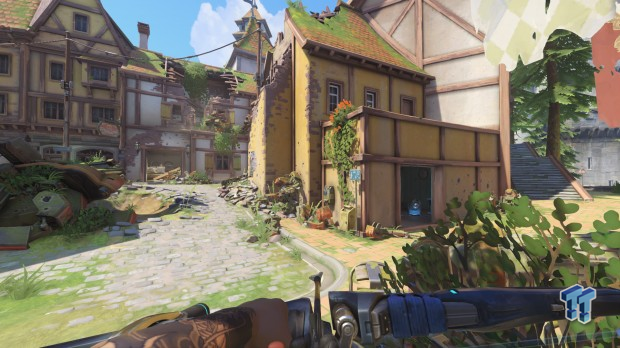 Outside of that, the map design is strong, offering an early chokepoint to attackers with two flanking routes, one accessible only to highly mobile heroes (D.Va, Winston, Pharah, etc.), and the other to everyone. The first instinct, as it always is in the early days of a new map, is to fight through the choke, but it heavily favors defenders, so you don't want to commit too much to it. 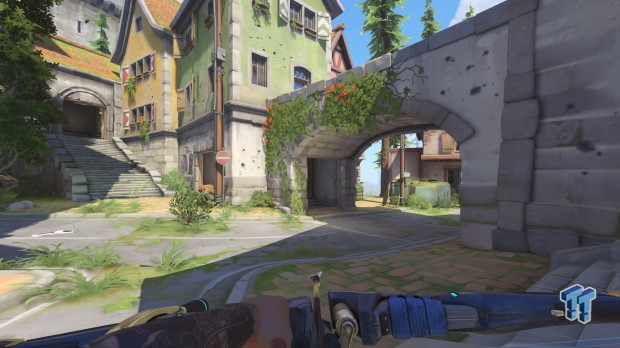 To compensate, flankers and highly mobile heroes are incredibly effective at helping the rest of the team punch through, as they can get past the choke easily and quickly start causing chaos, or they can travel even further over the building behind the choke and get to the point just a short distance away, drawing the enemy back to it.

From the defenders' point of view, you're still in a strong position as the choke gives you a wide view of what the enemy is up to and you have lots of cover. The trick is to be disciplined enough to not have too much of your team drawn off the choke by decoys (one or two is usually enough). 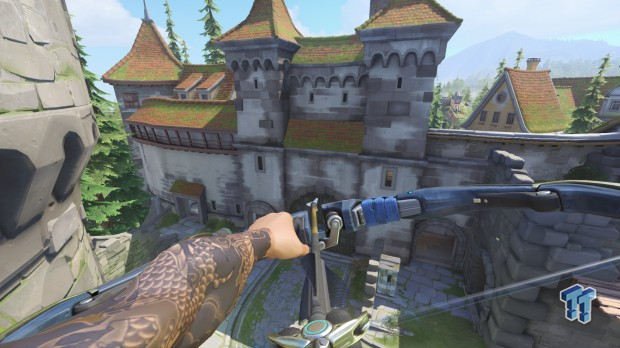 Flankers are still very effective once you capture the payload as it's here the outskirts of the castle show up, and there are a ton of routes and verticality to take advantage of, more than on any other map. For defenders, medium-long range DPS (damage per second) heroes like Soldier 76 and Hanzo are tremendous along the higher castle walls (for maximum flavor, put six Hanzos up here and fire away). The challenge for both teams is to stay grouped despite how open the area is. 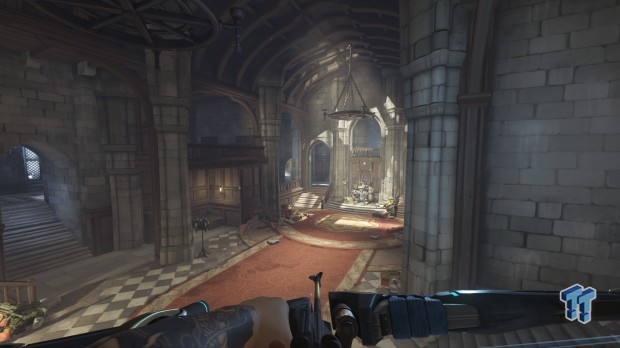 Once you're actually in the heart of the castle, attackers seem to be heavily favored as there's little cover for defenders, no choke point, and the flank routes are too close to spawn to be relevant on defense. Given defenders are likely favored overall on the first section of the map and given how real sieges worked, this isn't a bad thing, however.

As usual, on offense and particularly when attacking chokepoint heavy maps, you want a flanker to break up the defense and make it much easier for the rest of your team to push through. As such, I strongly recommend a Genji (depending on how his impending nerfs shake out) or Tracer on the first point, and possibly a Reaper. You may even want two, but either, another core DPS like McCree, Soldier, or Pharah (all depending on impending nerfs and new meta) will do well, or possibly a Junkrat or Hanzo (the former for busting up formation; the latter for ranged picks). 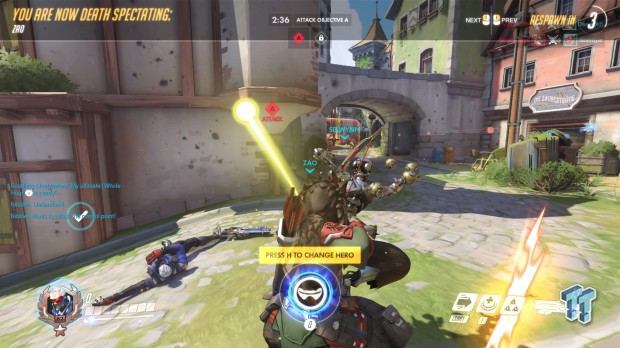 Tank-wise, a Reinhardt will be critical to help push through the choke, while D.Va or Winston is probably best to stand alongside him, so as to circumvent it. That said, it's hard to go wrong with the powerhouse that is Zarya (who's useful for punching through thanks to her barriers), or the pick-happy Roadhog.

As for supports, as of now you still want the bomb Lucio – Zenyatta tandem (which have a superior suite of abilities between them, extremely powerful and versatile ultimates, and a lot of damage to offer), but the incoming patch is likely to change that. It's tough to say for sure, but my bets are on Mercy – Zenyatta, for both attack and defense, despite the lack of AOE healing and despite Zenyatta's nerfs (his Discord orb in the PTR is still strong just not stupidly so), although I could see Ana and/or Lucio working their way into attacking compositions as well. Whatever is chosen, it's likely best to stick with it through the entire map. 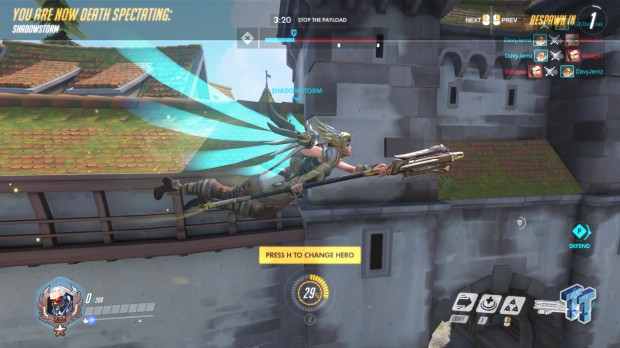 Past the first point on offense or defense, Reaper is likely best for flanking so as to take advantage of the multiple routes and verticality; your other DPS should probably be Soldier or McCree in order to remain effective in the long, open areas. 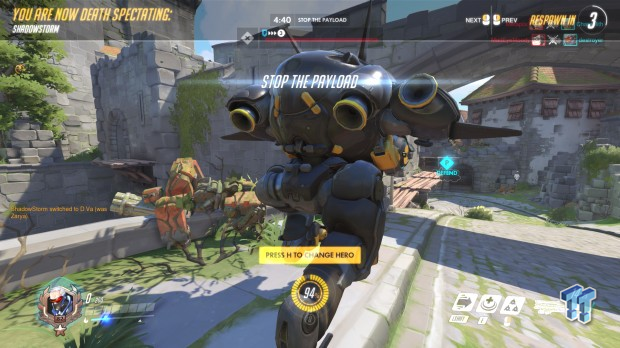 Tank-wise on offense or defense here, Reinhardt is great for keeping you covered out in the open while Roadhog is good for picks and to hook people off the map; Zarya would also serve well to provide further protection in the open and for long range DPS with her secondary fire.

Once inside the castle, a Genji or Tracer should be able to exploit the side routes very well on offense, while McCree is probably best to dole out the remaining damage, though Soldier or Pharah could be strong picks too, depending on balance changes and the opposing team composition. 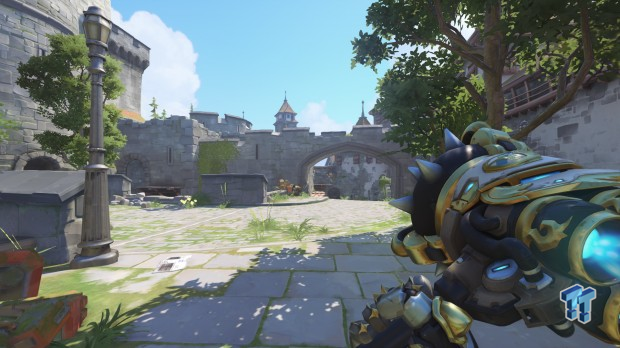 Any tanks should be strong here on offense, while on defense anything but Roadhog -- who tends to fuel enemy ultimates more on defense, giving attackers what they need to roll over their foes -- should work well.

With the launch of Eichenwalde will come two new skins for Reinhardt, each of which are arguably among his best yet. 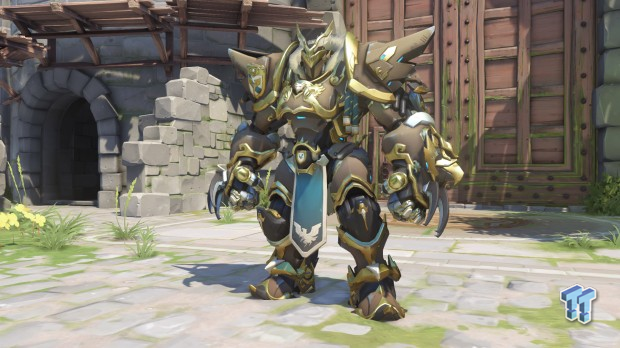 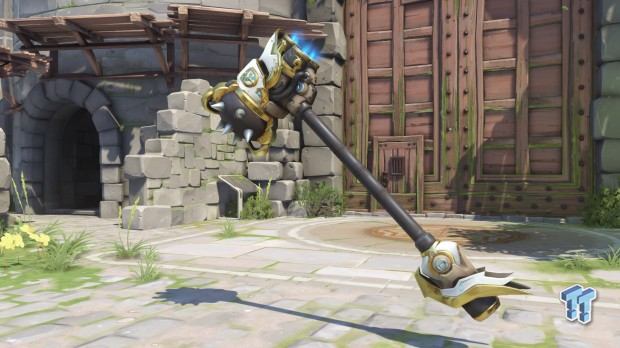 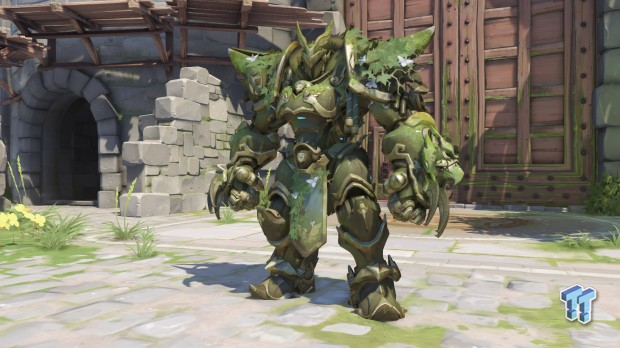 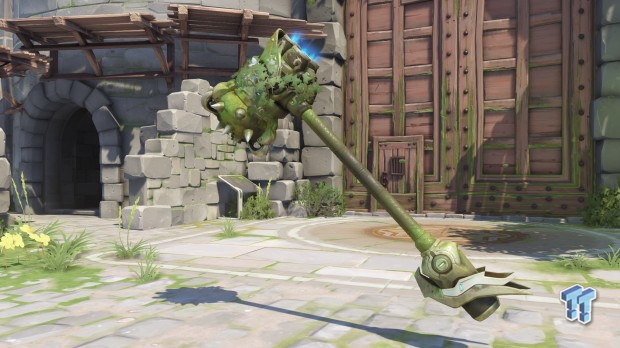 The first, Balderich, appears to transform him into the former king of the Eichenwalde castle with a glorious golden, blue, and brown scheme, while Greifhardt goes with a green and brown color scheme and covers him in plants and moss.

Both skins can be unlocked through normal loot boxes or purchased with in-game credits.

Blizzard has done well to mix up Overwatch gameplay with the most open, intricate map yet in Eichenwalde. Even better, the map encourages the use of heroes that are somewhat underplayed and/or underpowered right now, such as D.va, Pharah, and Junkrat.

Combined with the aforementioned patch and possibly imminent launch of new hero Sombra (rumored to be a stealth hero), it's a better time than ever to get into the game.