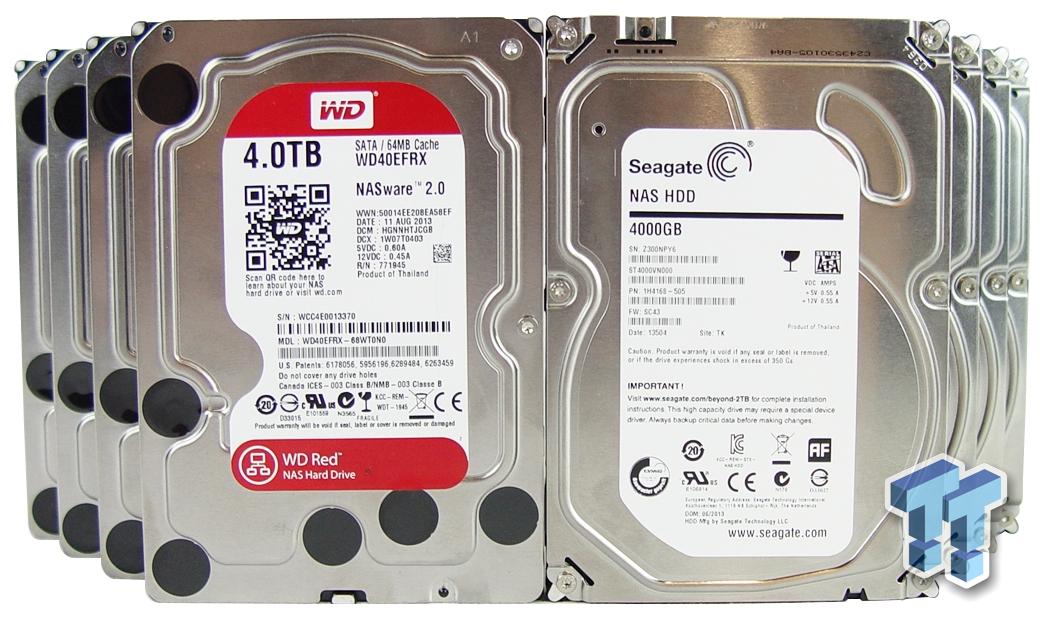 We have covered plenty of NAS HDDs here at TweakTown, and the reason is simple: more and more users are purchasing NAS units every day. The expansion of NAS capabilities allows them to serve a much wider use-case than just a few years ago. In today's digital-content tsunami, many users are searching for the best solution to manage their vast trove of data, and NAS fits the bill nicely. There is nothing quite like centralized storage to ease the headache of managing data from the ever-expanding number of devices in the home.

Surprisingly, we receive many requests about which drives will work best in a Direct Attach Storage (DAS) usage model. NAS HDDs are also commonly used for value-oriented DAS usage models, in arrays from one to five drives. The primary focus has always been the use of NAS drives in NAS units, but in reality, they can serve a dual purpose. Pairing these small RAID arrays with the latest RAID controllers provides significant advantages over NAS deployment models. We have conducted full product evaluations of both the WD Red, and the Seagate NAS unit. Our consumer storage editor, Chris Ramseyer, also examined the performance of NAS RAID arrays.

Both NAS HDD's we are testing today have been geared specifically to provide acceptable performance in NAS units, but that will not always equate directly to the unbridled performance brought on by utilizing a standard RAID card in a DAS environment. There are higher-priced enterprise-class HDDs from both manufacturers (the WD SE, and the Enterprise Capacity (ES.3)), but many users find that the lower price point of NAS HDD's provide a more attractive solution. In many cases, the price difference can range from 30-50% when comparing entry-level enterprise HDDs with NAS units that can perform the same function.

RAID controllers have enhanced functionality; and not to mention large caches, which provide superior performance in comparison to off-the-shelf consumer NAS solutions. The first advantage is that file transfers from inside the server or desktop are much faster. RAID controller caches also catch small random write activity before it hits the drives, and then sequences the data to deliver superior write performance. This helps mitigate a significant performance disadvantage suffered by HDD RAID arrays, allowing the underlying RAID array to function efficiently.

Many users of DAS RAID arrays are typically professionals in video and audio editing, and those who require high-performance workstations. We also see this type of usage model bleed over to the SMB and SOHO space, where more powerful full-blown servers are utilized to provide enhanced functionality and security that isn't always available in a NAS unit. One notable weakness of many NAS units is the performance reduction when utilizing encryption. RAID controllers and server operating systems go a long way to mitigate that performance hit, while simultaneously providing enhanced management functionalities.

Using a RAID controller also provides enhanced RAID sets, and the mobility to move the array from computer to computer. RAID controllers also typically provide faster RAID rebuild times, and better performance when in a degraded state. While the advantages of utilizing a DAS solution are clear, the performance difference is not always as pronounced. Let's take a closer look. 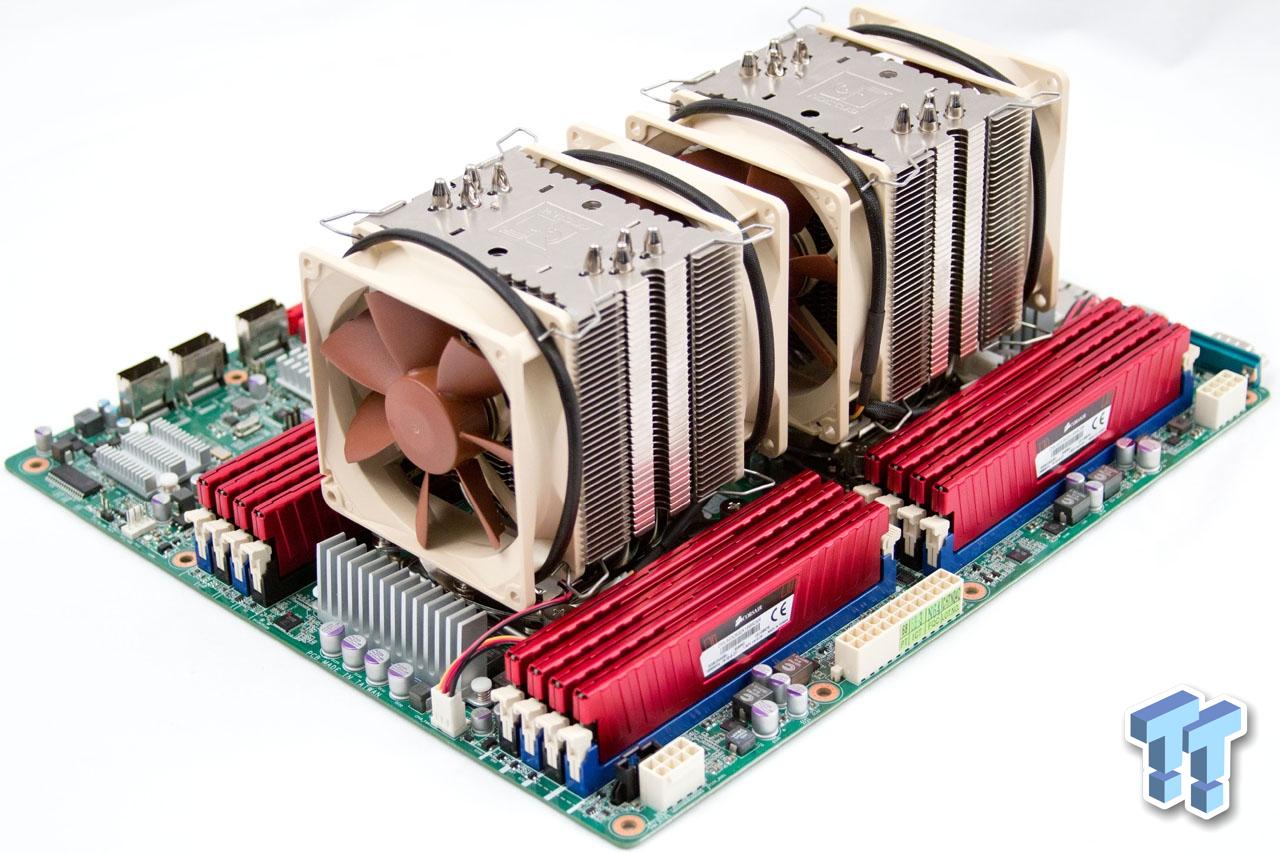 We utilize a new approach to RAID storage testing with our Enterprise Test Bench, which is designed specifically to target long-term performance with a high level of granularity.

Many testing methods record peak and average measurements during the test period. These average values give a basic understanding of performance, but fall short in providing the clearest view possible of I/O QoS (Quality of Service).

Consistent latency is the goal of every storage solution, and measurements such as Maximum Latency only illuminate the single longest I/O received during testing. This can be misleading, as a single 'outlying I/O' can skew the view of an otherwise superb solution. Standard Deviation measurements consider latency distribution, but do not always effectively illustrate I/O distribution with enough granularity to provide a clear picture of system performance. We also use latency plots to illustrate latency scaling under various workloads.

The first page of results will provide the 'key' to understanding and interpreting our new test methodology. In replicated environments, RAID 0 can be a compelling choice for bleeding edge performance. RAID 5 provides a layer of data security that protects from the loss of a drive. We are testing both RAID 0 and RAID 5 in this evaluation. This evaluation consists of tests with default settings conducted on a LSI 9271-8i with a direct connection. We conduct our tests over the full LBA range to allow each HDD to highlight its average performance. Short stroking can increase performance at the loss of capacity. 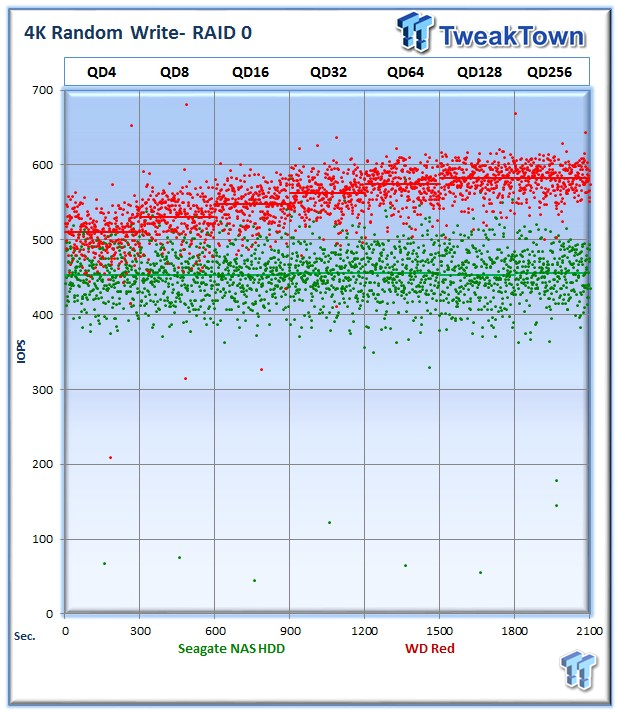 Each QD for every parameter tested includes 300 data points (five minutes of one second reports), to illustrate the degree of performance variability. The line for each QD represents the average speed reported during the five-minute interval.

4K random speed measurements are an important metric when comparing drive performance, as the hardest type of file access for any storage solution to master is small-file random. 4K random performance is a heavily marketed figure, and one of the most sought-after performance specifications.

Both arrays provide great performance. The WD Red array leads with 582 IOPS at QD256, and the Seagate NAS HDD array trails with an average of 456 IOPS. 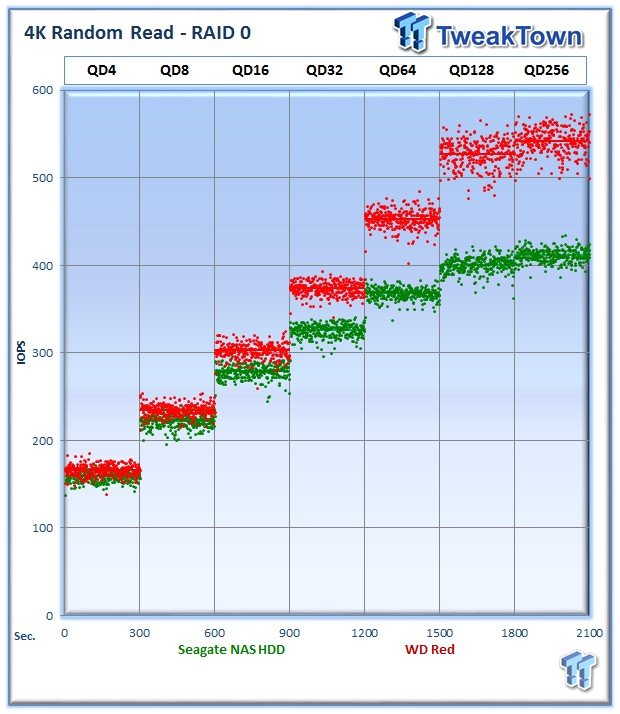 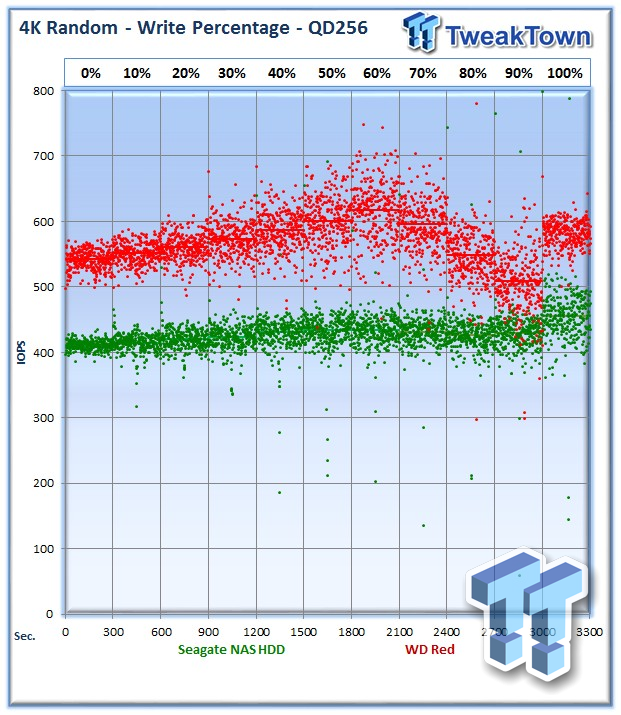 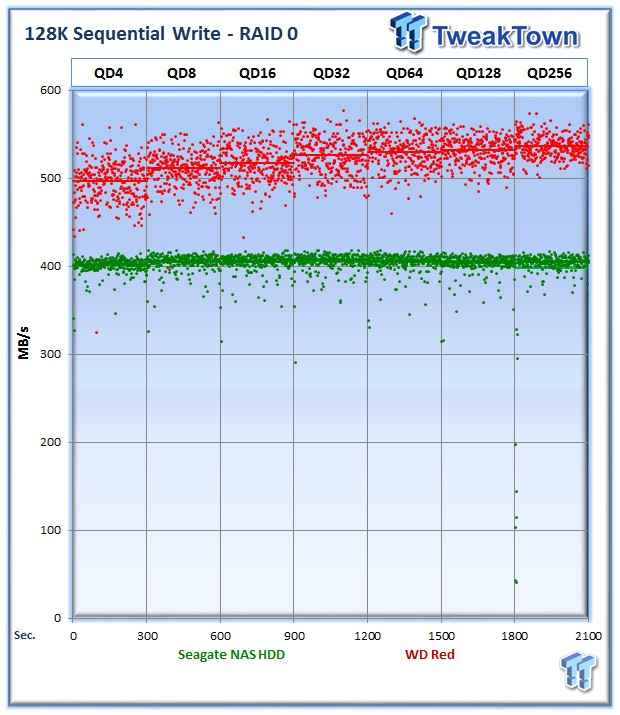 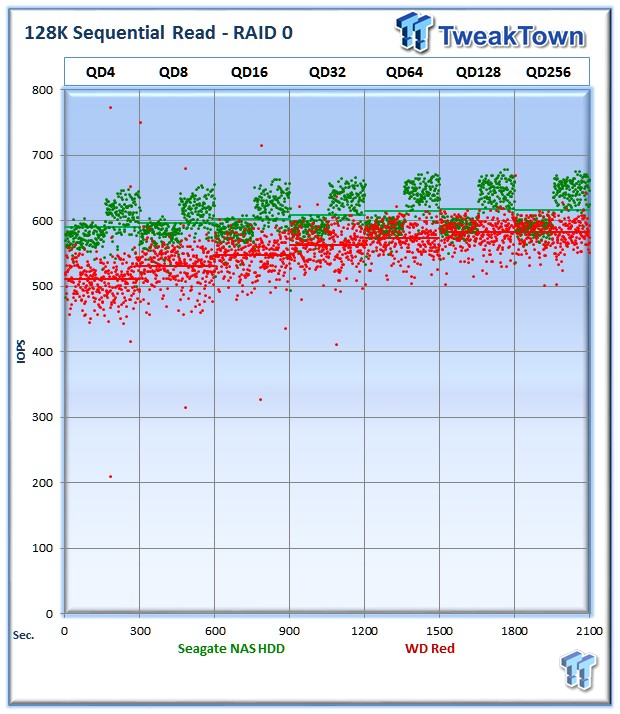 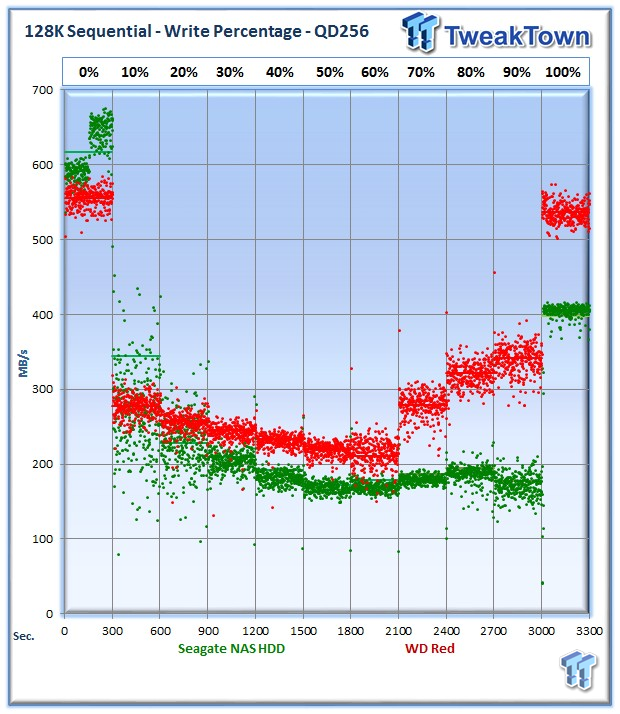 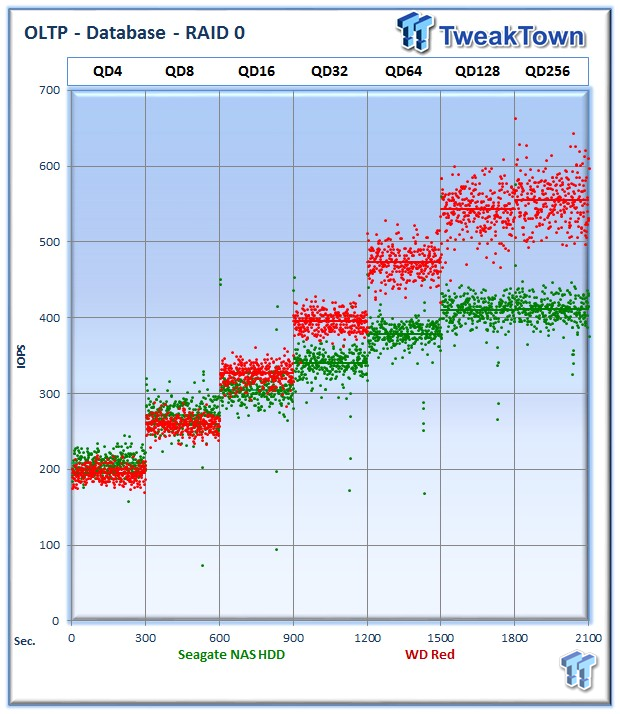 This test emulates Database and On-Line Transaction Processing (OLTP) workloads. OLTP is, in essence, the processing of transactions such as credit cards, and high frequency trading in the financial sector. Databases are the bread and butter of many deployments. These are demanding 8K random workloads with a 66% read and 33% write distribution, that can bring even the highest performing solutions down to earth. 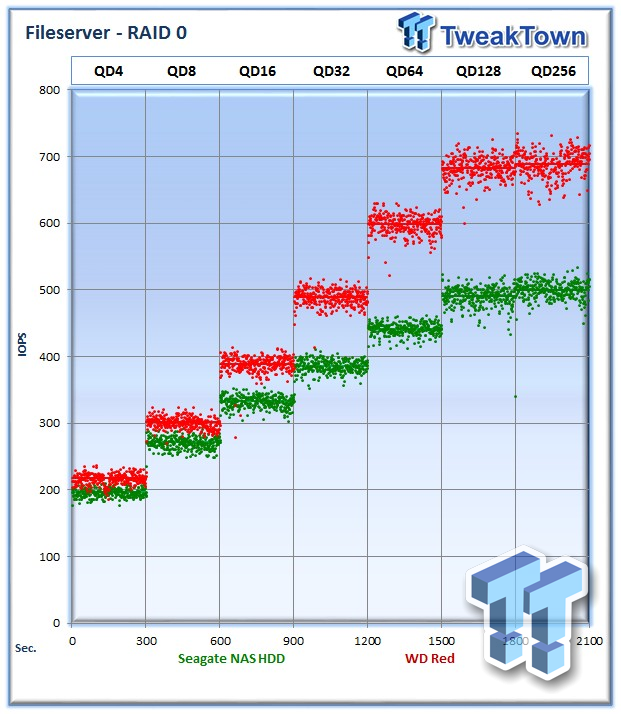 The WD Red leads again, with an impressive average of 689 IOPS at QD256, while the Seagate NAS HDD averages 500 IOPS. 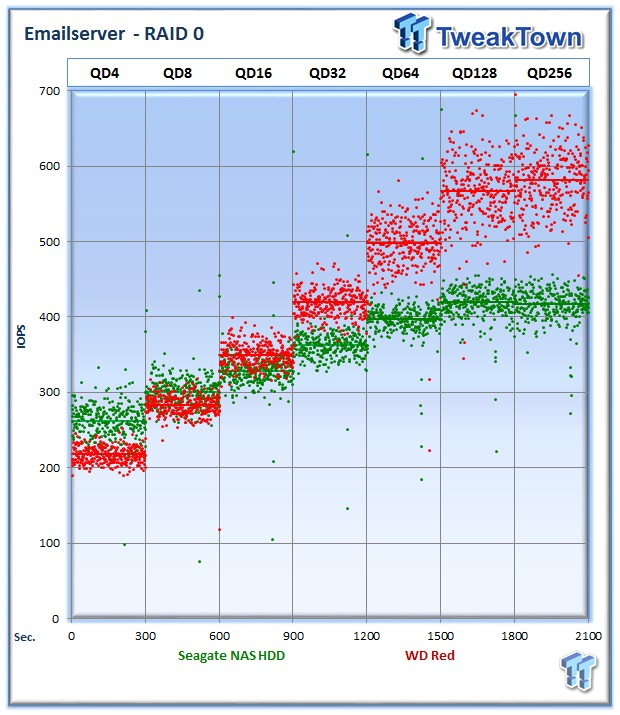 The Emailserver profile is a very demanding 8K test with a 50% read and 50% write distribution. This application is indicative of the performance of the solution in heavy write workloads. 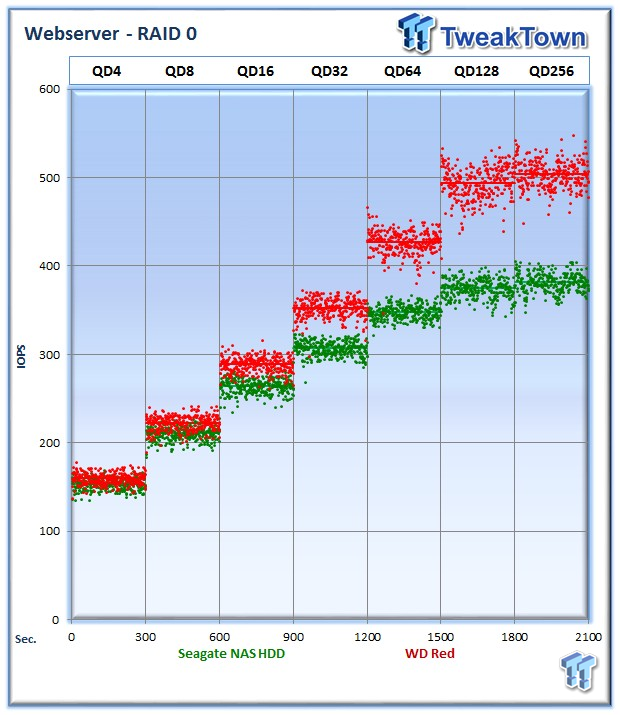 The Webserver profile is a read-only test with a wide range of file sizes. Web servers are responsible for generating content for users to view over the internet, much like the very page you are reading. The speed of the underlying storage system has a massive impact on the speed and responsiveness of the NAS, and thus the end-user experience. 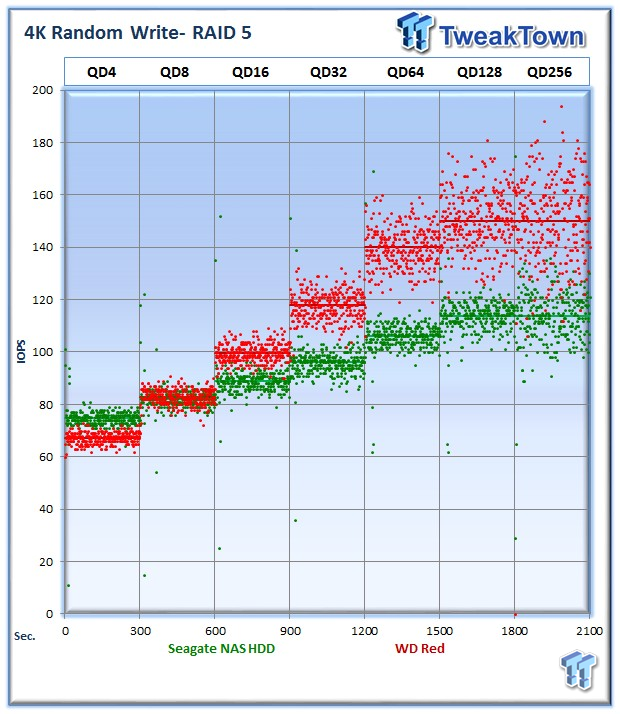 Write performance takes a huge hit with the RAID 5 arrays; the Reds average 149 IOPS to the 113 IOPS from the Seagate NAS HDD at QD256. 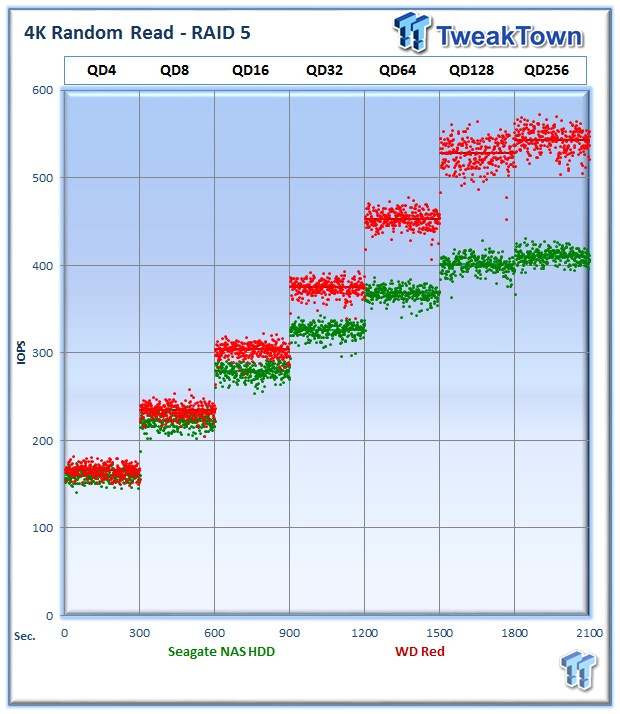 The read performance is comparable with results obtained in RAID 0, with an average 543 IOPS at QD256 for the Reds, and 410 IOPS for the Seagate NAS HDD. 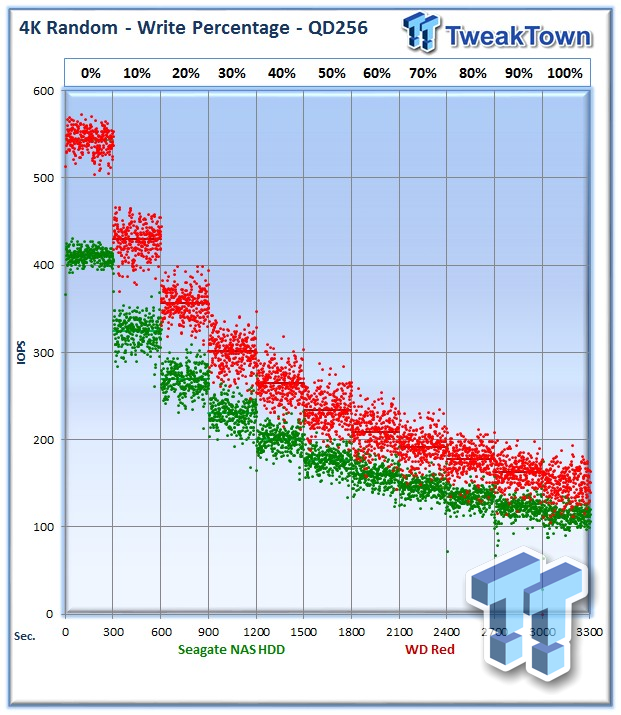 Both arrays experience a slope of degraded performance as we progress into heavier write workloads. This is an expected result of the RAID 5 write performance penalty. The Seagate NAS HDD exhibits less variability, though it does trail in performance. The gap between the two drives is significantly smaller in parity environments. 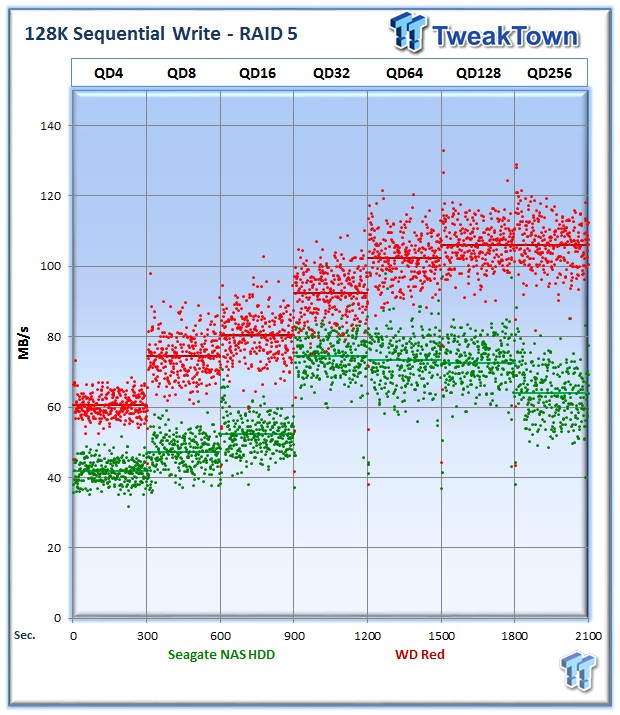 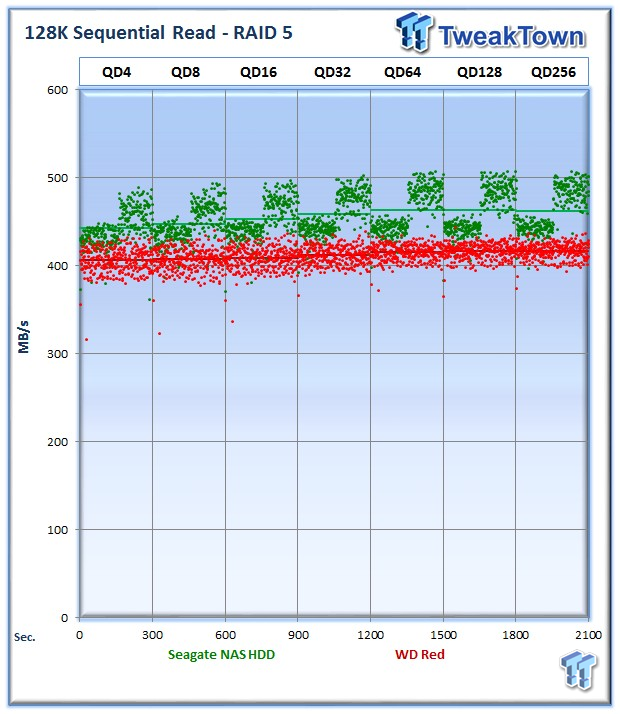 Read performance is again largely unaffected by RAID 5; the Seagate NAS HDD array shows an advantage at 462 MB/s at QD256, and the Red array averages 416 MB/s. 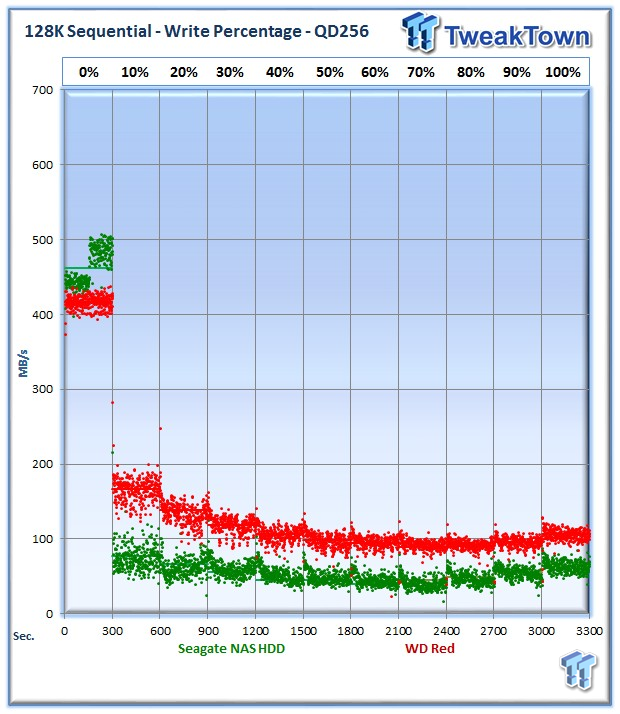 The performance gap is smaller in RAID 5 as we mix in heavy write workloads. 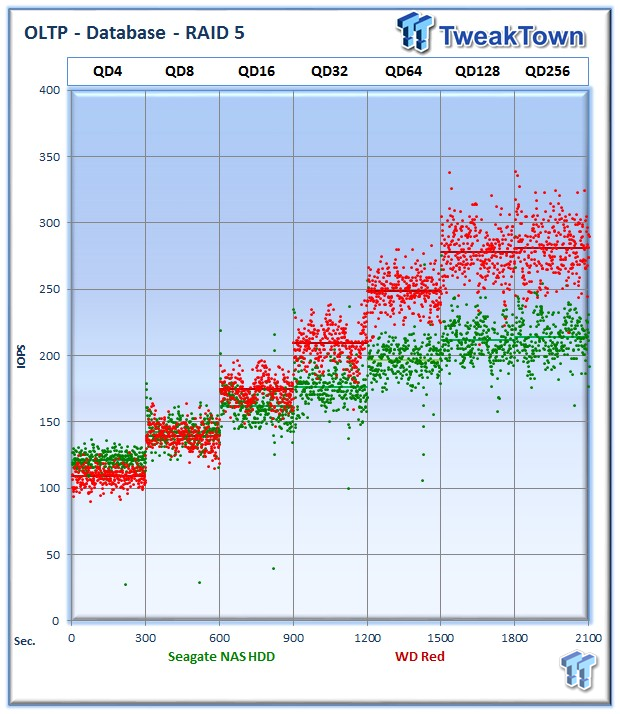 The Reds average 281 IOPS, compared to the Seagate drives with their score of 213 IOPS. 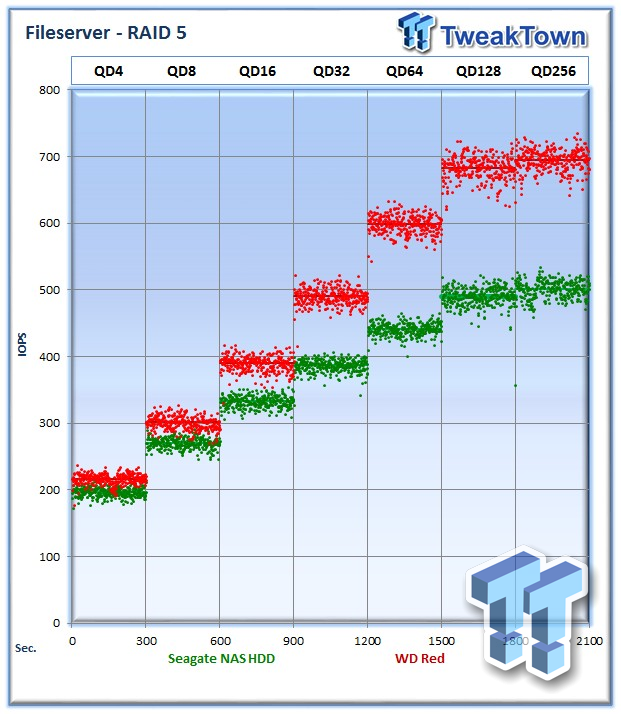 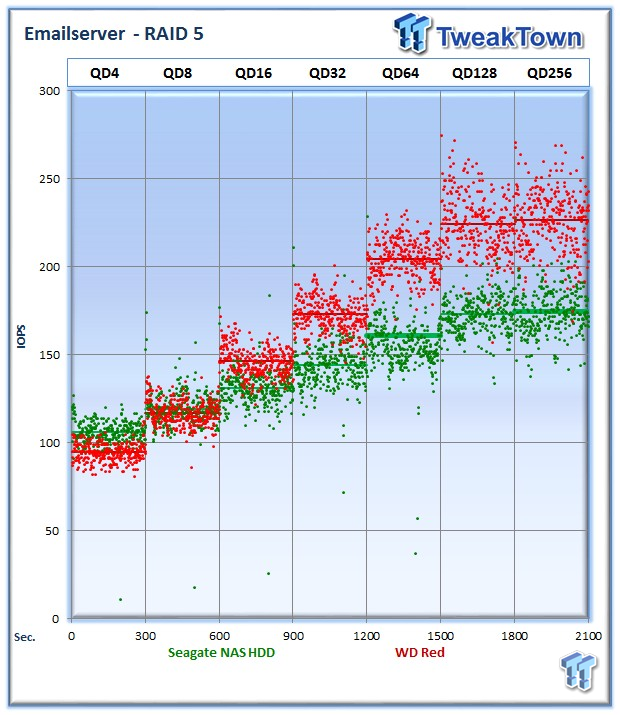 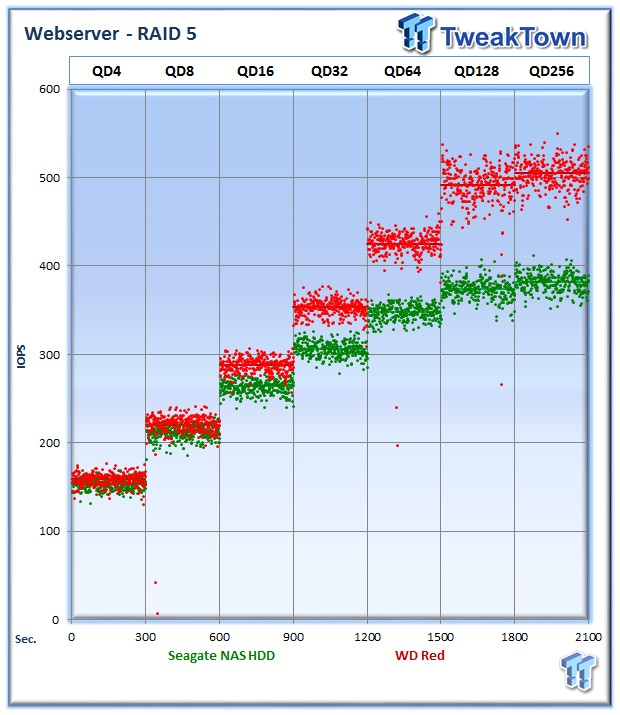 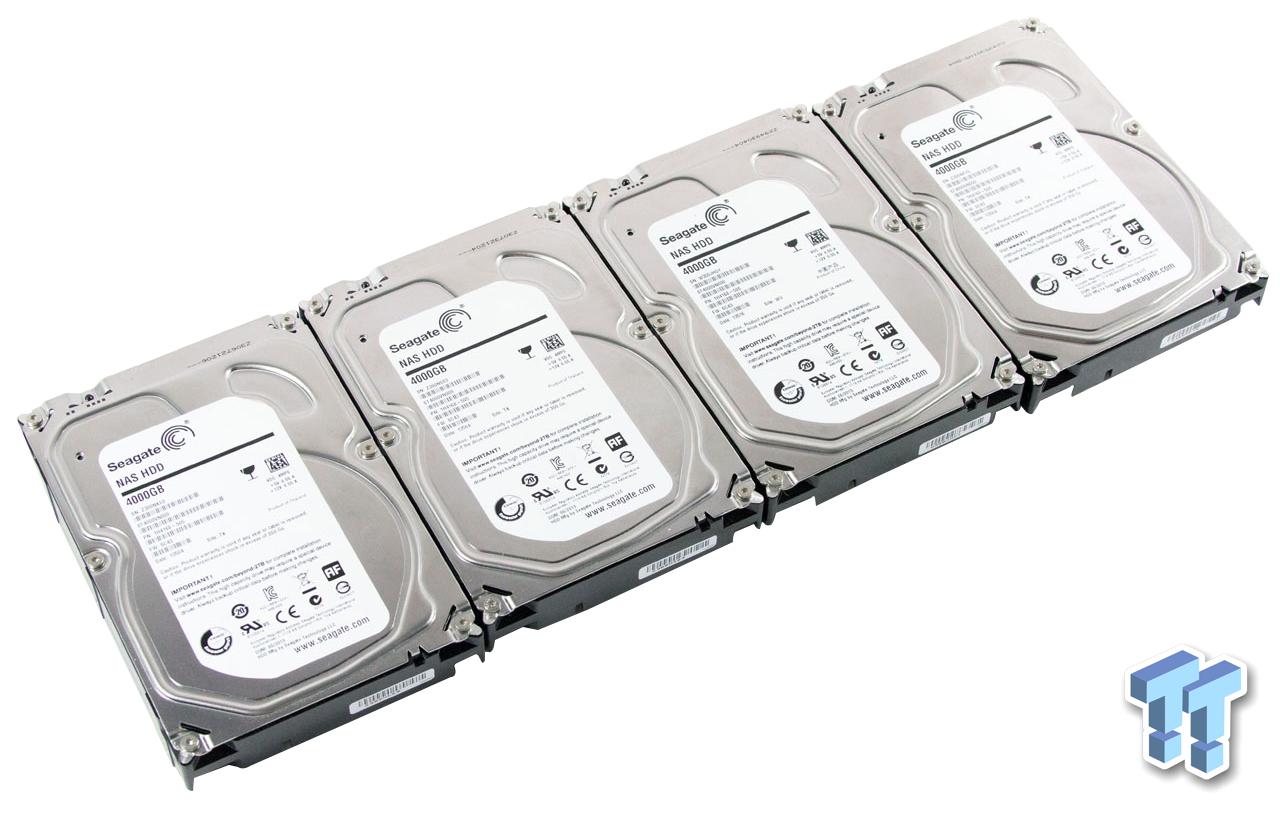 There are a surprising amount of users in the market for high performance RAID-capable drives at a friendly price point. Their search commonly ends with NAS drives. The NAS HDD segment is actually a newer classification that provides a great value segment for DAS usage.

While the WD Reds are marketed specifically for DAS arrays from one to five drives (along with their more typical NAS usage), the Seagate HDDs are only directly marketed for NAS usage. The only other options from Seagate for small-scale DAS usage are the Terascale and Enterprise Capacity (ES.3) HDDs, which are considerably more expensive. This leaves the Seagate NAS HDD as the go-to value offering for DAS usage from Seagate.

Most NAS units, especially in the one to five bay category, are constrained to the speed limit of a single gigabit Ethernet port. A single gigabit Ethernet port is limited to an effective speed of 120-125 MB/s, and this leads many prosumers to utilize the faster speeds of DAS RAID arrays. Both drives are resilient to heavy workloads, and provide plenty of endurance for typical prosumers with small-array DAS usage. The drives also feature various spin-down states, and communicate directly with RAID code to repair any data loss.

Most SMB and SOHO users will not be utilizing a RAID 0 in their DAS, unless they dealing with replicated data protected by strong backup schemes. However, in the prosumer space there will be a stronger chance of utilizing RAID 0 arrays as fast scratch disks for content creation and modification.

In this usage model, the WD Red wins at all random workloads by a convincing margin. In RAID 0, the WD Reds also put forth a commanding lead in sequential write performance; leaving lower power consumption and faster sequential read speeds as the only advantages for the Seagate NAS HDD.

In RAID 5 usage, the most common type of DAS array, the WD Red leads with random workloads, but the margins are not as large as with RAID 0 usage. In parity environments, the WD Red still wins overall, making it the best choice for the majority of DAS workloads. Users searching for sequential strength in parity environments will fare well with the Seagate NAS HDD.

Consumers will always look for the best value, and there is no denying the obvious price advantages of using a NAS HDD in RAID. The emergence of NAS HDDs provide resiliency in RAID environments, and good-enough warranty periods for consumer DAS applications. We expect to continue to see this trend expand as NAS HDDs mature.