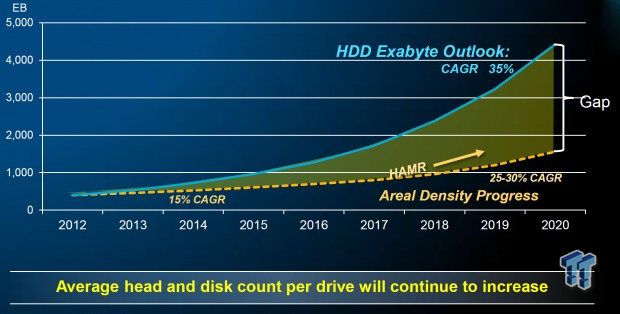 The massive data explosion is projected to continue unabated as far into the future as any rational projections can predict. The fuel of social media, the cloud, and the emerging 'Internet of Things' feed this out of control data fire. Much of this unstructured cold data is rarely, if ever, accessed again. This 'write once, read never' type of data is accumulating at a rapid pace, and economical means to store the inundation of data is a primary concern in the datacenter.

The proliferation of data also extends to massive scale-out environments, disk-to-disk-backup scenarios, and replication/RAID environments. RAID and replicated environments in particular have an almost insatiable appetite for raw storage, with multiple copies of data essentially multiplying the problem. It seems that the demand for more storage is coming from all quarters of the enterprise storage segment, with no clear answers on the horizon.

The immediate answer to stem the tide of data is to increase the areal density of the drives. Packing more data per square inch provides a denser package that helps to address the need for more storage capacity. With much of the low-hanging fruit already taken, the utilization of two emerging techniques provides the clearest path forward to increase the areal density.

SMR (Shingled Magnetic Recording) and HAMR (Heat-Assisted Magnetic Recording) are novel approaches to increase density, but the two technologies are projected to deliver an areal density increase of only 15% over the next several years. While this is clearly a step in the right direction, the yearly demand for data growth is 30-40%. This leaves a large gap, especially when we take into consideration the 4,000 Exabyte scale of the problem.

Another answer is to simply build more... more of everything; datacenters, servers, racks, HDD's. Continuing to scale-out the infrastructure would be the easy (yet incredibly inefficient) manner of dealing with the problems of the future. It would also mean an increase in the three major 'pain-points' in the datacenter; power, cooling and space. These three problems are major drivers of the continuing expense of operating a datacenter.

Unfortunately, the reality is that IT budgets are not projected to grow during this same growth period. Storage companies, and datacenter administrators, are tasked with finding a way to store 40% more data with the same budget they have today. 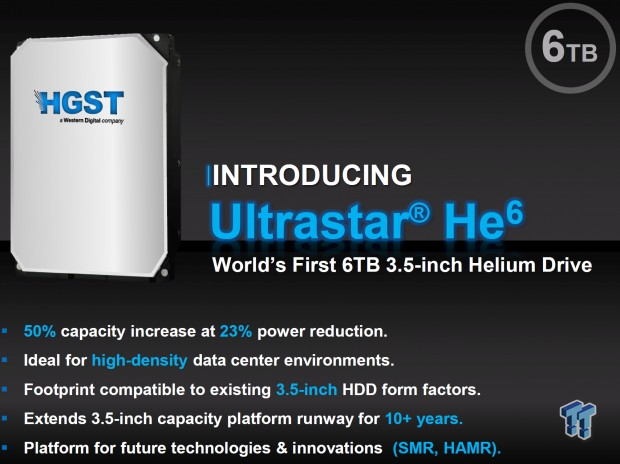 HGST has focused their efforts on using helium to address the problem with the release of the 6TB Ultrastar He6 Helium-Filled HDD. The 'He' predictably represents the helium element on the periodic table of elements, and the '6' denotes its 6TB of capacity. Of course, the biggest talking point centers on the 50% increase in capacity. These new HDD's feature a whopping 6TB in the new He6 Helium-Filled HDD's with the same 3.5" form factor we are accustomed to using. The incredible increase in density yields a whole host of other improvements, including a massive decrease in power consumption. Power drops 23% for idle power draw and yields 49% better Watts-per-TB. The drives are also 50% lighter than the standard counterparts are, but this is not borne of Helium's lighter-than-air characteristics.

Achieving all of these goals with a new product that is backwards compatible with existing infrastructure is a major coup. A drive as radically new as the He6 will require a few pages to cover all the bases, so come along as we drill down deeper into the Helium-Filled architecture.

The architecture of the HGST Ultrastar He6 HDD starts with two new proprietary technologies.

HelioSeal is the patented method of hermetically sealing the HDD, trapping the Helium inside, but also keeping air out. The breathing holes commonly seen for on standard HDD's are gone, which also creates an increased resistance to humidity. Another noticeable difference is the complete absence of any fasteners, reducing weight significantly. HelioSeal technology will be utilized in a number of different uses, but for now HGST is remaining quiet on those applications. 7Stac references the new design with seven platters packed into the standard 1-inch high form factor. 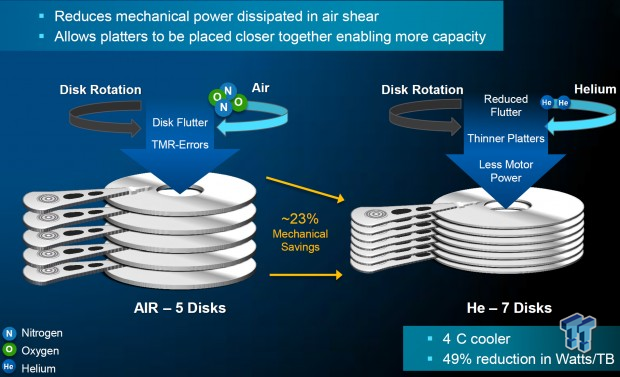 Filling a drive with Helium to increase density is almost a laughable prospect until we drill down to explore how this addresses the problems with existing HDD's. Most of the major problems with HDD's boil down to air resistance. As the disk spins in a typical HDD, the platters cutting through the air inside generate turbulence. This turbulence creates intense vibration, which leads to other issues in the design of the HDD.

Turbulence can lead to the thin disk platters (constructed of glass substrate) to fly apart, necessitating thick, sturdy platters. Vibration introduces disk flutter into the equation, which increases the TMR-Error rate of the HDD. The turbulence and vibration also creates drag for the motor to overcome, thus increasing power consumption.

All of these negative effects are reduced with the removal of oxygen and the introduction of Helium. Helium has 1/7th the resistance of typical air. This cuts down drag, turbulence, and vibration, allowing the use of thinner platters. The thinner patters are constructed of normal materials, but weigh much less. This provides the double benefit of reducing air-induced drag and weight-induced drag on the motor.

With the platters occupying less space and weighing much less, the obvious solution is to pack in more heads and platters. This increases the density, but surprisingly still yields an overall reduction in power consumption and weight. The lower power consumption leads to a much lower temperature threshold for the drive, which operates cooler than typical HDD's by 4C. This reduction of heat output will lead to a tremendous reduction of power required for cooling in dense deployments.

With no fasteners, more heads, and thinner platters in the same z-height, the He6 is nothing short of revolutionary. 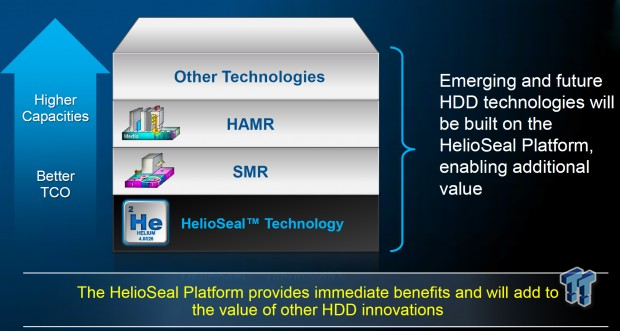 HelioSeal Technology is forward compatible with both of these emerging technologies. By positioning the He6 platform as complimentary to other density-increasing technologies, it certainly will not be long before we see HDD's with even more density on the market. 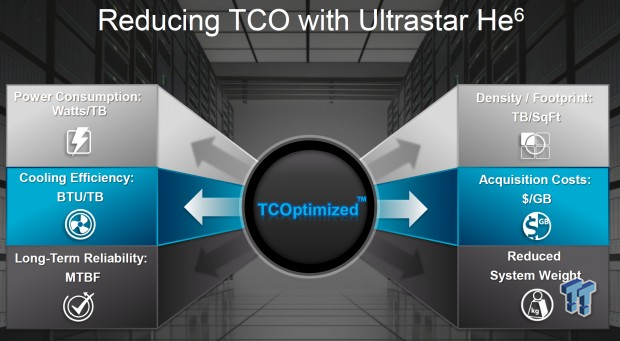 There will be a slightly higher acquisition cost for Helium-infused HDD's, thought he numbers aren't being officially disclosed yet. The incremental cost increase is easily offset by the tremendous TCO reduction noted it the chart above. Much like purchasing a hybrid vehicle, the higher acquisition cost will be more than worth it in the end. 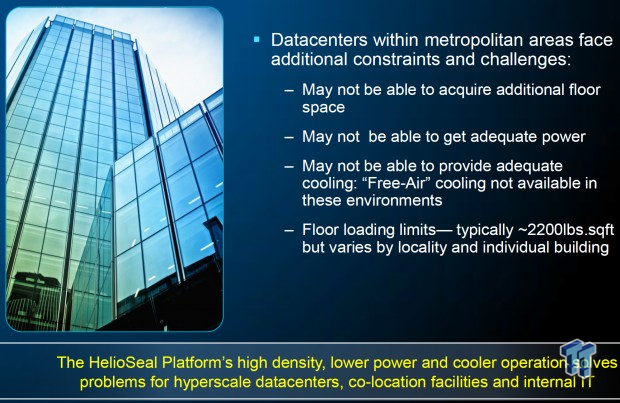 One of the immediate use-cases is for organizations that have very limited environments for their datacenter. This is especially pertinent in metropolitan areas, where the datacenter is beset by floor space, floor loading, power, and cooling limitations. All of these challenges are addressed with a slip-in solution that is compatible with existing infrastructure. 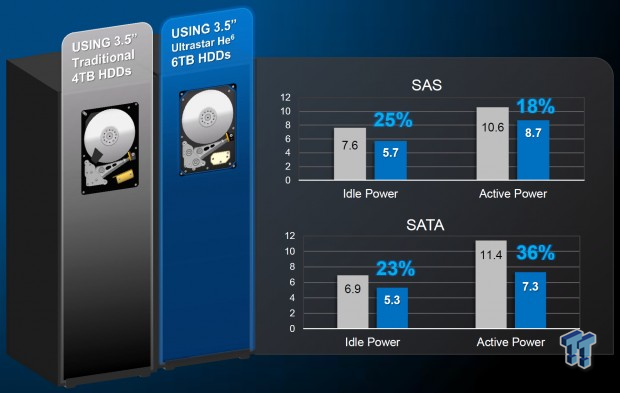 The advantages of a 6TB He6 are clear in comparison to the existing 4TB drives. 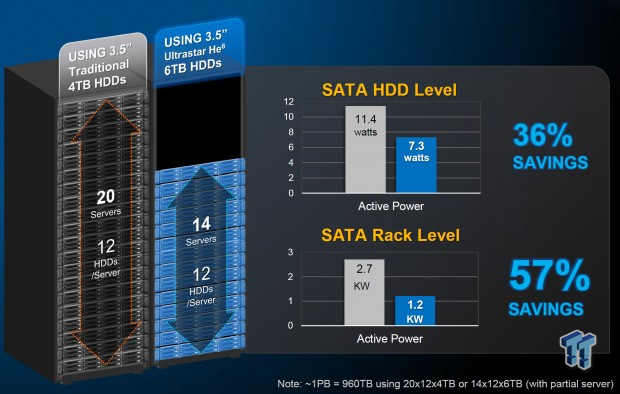 Looking at the advantages in a single rack, we can observe the driver behind the TCO reduction. Not only are there big power saving in each drive, on a per-rack basis we begin to see those savings multiply. We also note the reduction of space required to accomplish the same task. 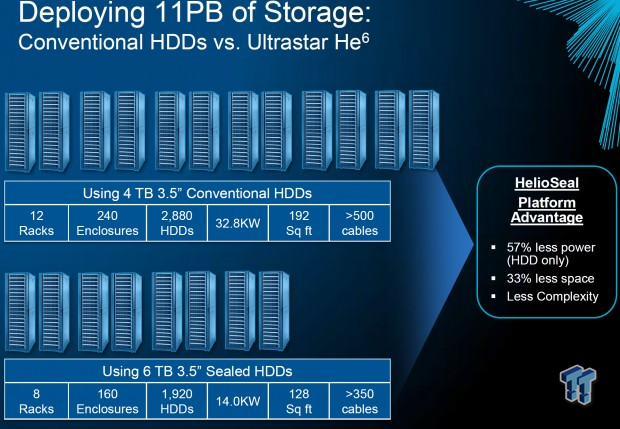 Another unseen advantage is the reduction of cabling, enclosures, and entire racks when we zoom out to hyperscale architecture. 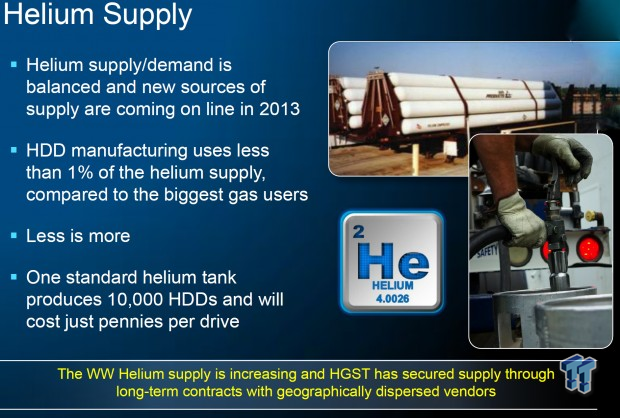 There are concerns with Helium supply on the global market. During WW2, the US government began to stockpile vast quantities of Helium due to its strategic significance. The National Helium Reserve at one time held over one billion cubic meters of helium gas, and it's primarily use was as a reserve of the coolant used during the Space Race and the Cold War. The US began selling off the reserve in 2005, sending shock waves through the helium market. Helium is used in many areas in technology and the US reserve provides 42% of US supply, and 35% of the world's supply.

The US reversed the decision to deactivate the reserve in September of this year, but the reserves will not last forever. There are companies moving to increase production, but this is slated to take years. The instability and uncertainty in the helium market has led to a doubling of price over the last 15 years.

Luckily, the amount of helium needed for each drive is less than the amount used in a typical balloon. HGST has also made a point to secure long-term contracts with a geographically diverse source of helium suppliers. The rationale behind having suppliers in different areas of the world also stems from the lessons learned after the Thailand floods.

For now, the HDD industry only consumes 1% of the world's helium supply, though this may jump to roughly 4% with success of the helium-infused HDD's. 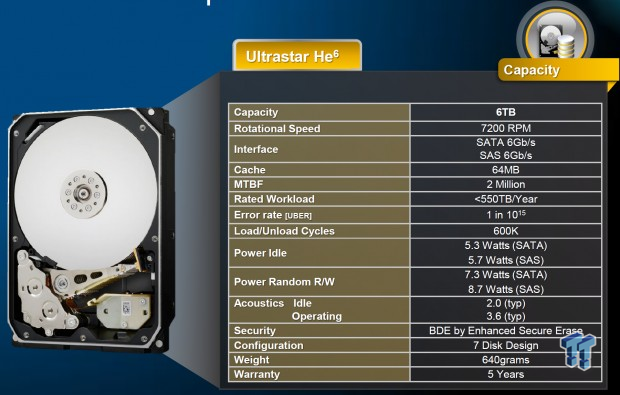 The specifications of the drive itself aren't that much different than typical four-platter HDD's. The drives are spec'd for a 550TB/Year workload with an impressive MTBF of two million hours. The UBER rate remains the same at 1 in 10E15. The real differences come in the lower weight, lower power consumption, and even a 0.9 bels reduction in noise levels. The HDD also features the same reassuring five year warranty we have come to expect from enterprise HDD's.

One of the greatest things about the new helium-infused architecture is the exciting new possibilities that it brings out in the future. With a hermetically sealed case, there is no need for breathing holes, as today's standard hard drives use. This will allow these new HDD's to be immersed in cooling solutions, which is an emerging method used for cooling servers that many project will shape the future of the datacenter.

The datacenter won't float away with helium drives from HGST, but there will certainly be lighter bills associated with the cost of running the datacenters of tomorrow. It is important to note that this is just the first revision of this new approach in the wild. The addition of helium into the inner working of HDD's will certainly revolutionize storage technology for many years to come.