I still remember the first Tomb Raider on the original Sony PlayStation, my neighbor at the time was around 10 years older than me (I was 12-13 at the time) and obviously had a job. High school me thought it was mind-blowing for someone to own this powerful console, and to be running Tomb Raider.

The graphics were incredible, and it was such an amazing game to play at the time. Between then and now, we've seen a bunch of Tomb Raider games, some movies starring Angelina Jolie and everything in between. Crystal Dynamics have now rebooted Tomb Raider, and it has AMD behind them.

I've played the game for all of 15 or so minutes, and didn't think much of it, but it does have a built-in benchmark that we've run in both 1080p and 5760x1080p. This is going to be the first of many games we're going to try out in various resolutions, so continue checking back for some more GPU goodness!

For your information, I'm running:

I'd like to extend a big thank you to Sapphire, Corsair and ASRock for supplying the parts for this machine, I couldn't write this article or any future articles without this hardware!

Now onto the ever so important benchmarks; Tomb Raider has so many different graphical options, but we've chosen to run the two highest settings, Ultra and Ultimate.

Ultimate turns on the TressFX hair physics, which strains the system much more. At the moment I personally don't have any NVIDIA GPUs to play with, but this should hopefully change in the coming weeks. For now I've used our Sapphire Radeon HD 7970 video cards, in both single and multi-GPU configurations, with both single and multi-monitor resolutions.

I've run both the Ultra and Ultimate tests at 1920x1080 and 5760x1080 with both a single GPU and CrossFire enabled. I've also re-run the tests on each configuration at stock, and overclocked settings. This gives us a great look at how Tomb Raider can stretch your GPU legs. 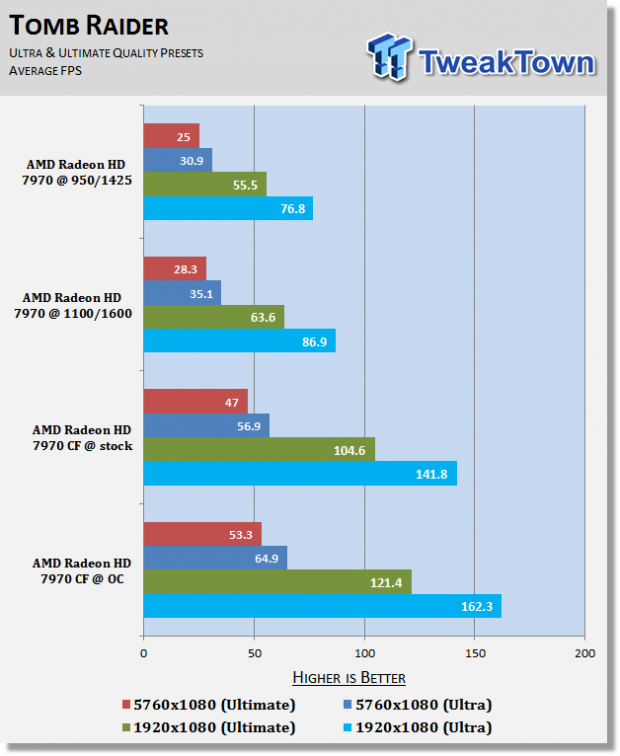 EyeFinity is impressive with Tomb Raider, working right out of the box with no setting adjustments required - and performance is equally as impressive. With a single HD 7970, we still see 30.9 FPS.

Doubling the GPU performance provides us with close to double the frame rate, from 30 FPS to 56.9 FPS in Ultra settings.

TressFX brings the GPU down by 10-20% depending on the resolution and overclock. In EyeFinity, we see the overclocked HD 7970 video cards drop from 64.9 FPS under Ultra settings to 53.3 FPS with Ultimate settings.

Tomb Raider is a great way to bench your system and it seems to spread performance across multi-GPU solutions quite well, which is a nice change to games like Battlefield 3 where multi-GPU use can be sporadic.

EyeFinity performance is also great, where going CrossFire close to doubles your frame rate, which is really needed when tripling your resolution.

I didn't expect much from Tomb Raider, but the inclusion of a benchmark within the game is a sign that Crystal Dynamics actually give a damn about PC gamers. Built-in benchmarks should really be included in all major releases, and I think we'll see more of that going into next-gen games from next-gen consoles.

Games being built around actual x86-based architecture and DX11-capable, AMD-based GPUs is going to be a huge gain for PC gamers and enthusiasts.