We just wrapped up a one-on-one interview with Gary Smerdon, the VP and GM of the Accelerated Solutions Division at LSI. Gary was ready to answer our questions about the recently announced acquisition of SandForce. SandForce doesn't need an introduction around these parts; they design the SSD controllers in nearly all of the leading products on the market today and for that matter yesterday as well.

LSI's initial press release left us with several questions and to be honest about it, I didn't sleep that well last night. Luckily, at the start of my morning LSI was available to set the record straight. I will sleep much better tonight!

At this time SandForce's company HQ is in Milpitas, California and at least one other office exists in Asia. SandForce has roughly 185 employees globally and LSI is gaining 185 new employees. Gary tells us that SandForce is being brought into the LSI family as a whole and the collective will be known as the Flash Components Division. LSI's new FCD will be headed up by Michael Raam, SandForce's current president and CEO. 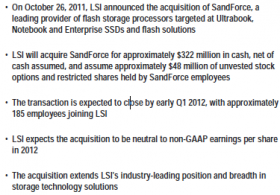 This is very good news for SandForce's current partners that manufacture the industry leading products we review here at TweakTown on a frequent basis. LSI has no plans to cut off partners, even those that make competing products that face off against LSI's own enterprise WarpDrive SSD.

From the information we gathered today, the consumer market and consumer products will go untouched - SandForce will continue to be SandForce as we know it today.

In the future, an LSI backed SandForce will gain new assets, more R&D power and access to LSI's patents. We should see a much larger SandForce presence in the enterprise market as a result. SandForce hasn't built the same name recognition as LSI, so instantly LSI-SF will become a more attractive partner for major OEMs and system builders who might have had doubts about working heavily with SandForce, the startup company.

The SSD market is projected to make 450 million this year and that is projected to increase to 2 billion by 2015. SandForce has a unique product with class leading endurance, performance and consistency, so a large portion of the estimated pie should fall on their plate.

LSI - The Force is with us 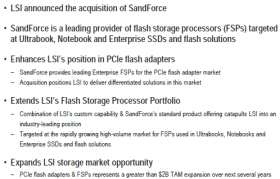 No matter how good the deal is for SandForce, things are only looking better for LSI. LSI has been an investor in SandForce since 2009 and a customer since 2010. As an owner LSI will have not only have early access to new SandForce products, but also be a driving force in the direction in which new innovations are created.

It's no secret that PCI Express is the next generation interface for enterprise SSDs and LSI has a fierce competitor in Fusion-io. By picking up SandForce, LSI will be able to pursue their aspirations of making a better product than the io-Drive Series of products. 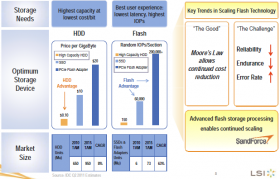 SandForce's DuraClass technology is currently one of the very few solutions that enable Moore's Law to continue in this market. We are already seeing competing controller products being spaced further apart from release to release as write amplification and NAND flash wear are becoming a bigger problem as NAND die size shrinks. Even Intel, who at one time lead the SSD market and produced their controllers in house have turned to SandForce for a solution. Intel's Cherryville SSD should be arriving on the market when the X79 chipset is released in less than a month. 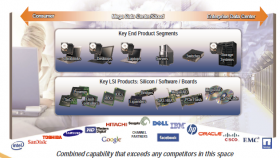 In our conversation with LSI, information flowed freely and LSI seemed to have all the right answers. Having a plan now doesn't mean the plans can't change over time. In the image above we see a list of partners like Intel, Samsung, HP, Hitachi, Dell and Toshiba. What we don't see are the SandForce partners that we've come to appreciate in the consumer space; OCZ Technology, Corsair, Patriot and so forth. We only hope that in the long term SandForce is able to retain the relationships that have made the company what it is today and consumers like you and me very happy with our 500+MB/s solid state drives.

There is no doubt that this LSI-SF deal will be good for both companies and the enterprise market. SandForce's consumer products are developed from innovations made from the enterprise sector, so we look forward to even better products in the future trickling down to the shelves of our favorite retail stores.

At the same time, we look forward to new cutting edge products in the enterprise market and expect to see LSI ramping up R&D on enterprise PCIe products. LSI will be able to quickly customize controllers for their products by having the force on their side.