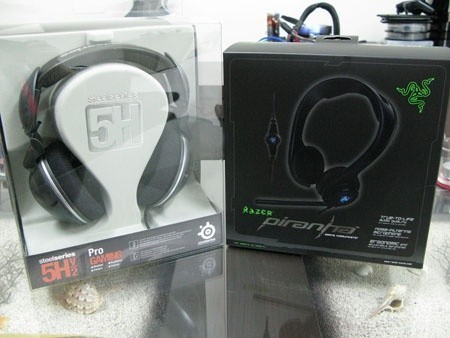 Today we've got two gaming oriented headsets in hand from SteelSeries and Razer. Both headsets are equipped with built-in microphone booms and offer in-line switches to control volume and mute functions for the microphone.

Here are the specs for the SteelSeries 5H v2:


Here are the specs for the Razer Piranha:

Can You Hear Me Now?

From the specifications listed on the previous page, it looks as though SteelSeries have the better response on the cans and the microphone, but let's see how it stacks up in reality.

First, I will cover the SteelSeries 5H v2 and run them through a couple of sound tests to determine overall volume, frequency range and response. 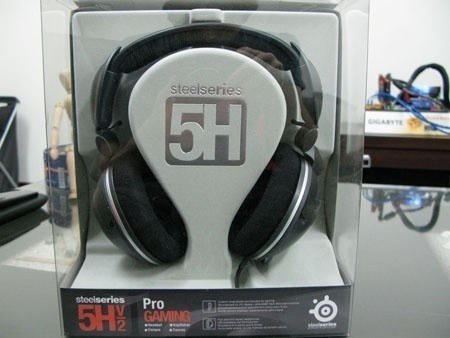 Plugging the headphones into my line-out from the back of the computer is the most logical thing to do first, despite the fact I have an amplifier to drive my speakers. Thankfully the industry has finally gotten around to agreeing on a colour code for all the 3.5mm jacks! - As it can be a nightmare if it's dark and cramped to try and figure out which hole is line-out and which is mic.

With the headset jacked in, it's time to pick some music. First I decide to try the response of the units by playing Rob Dougan using raw WAV files to ensure that the sound is not crippled as in the case of Mpeg layer 3 encoding. The mix of the strings and deep bass beats is a great way to find out how the driver units in the headphones can replicate the sound. 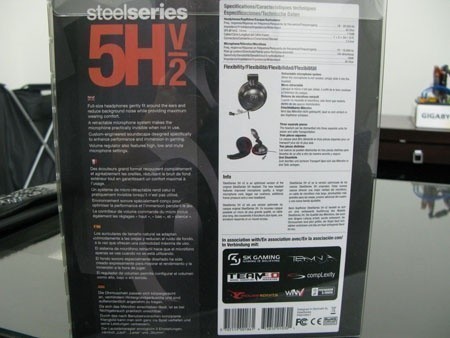 The first thing I noticed about the SteelSeries is that they are quiet, really quiet; even when fiddling with the in-line volume control to make sure it's all the way up. So, up goes the windows volume control and I get a more respectable level, but the volume is nearly topped out and it's not super loud.

The tunes flow nicely through the units, however, and there is minimal distortion despite having the windows volume at full blast. I can detect the high pitch of the string sections and the bass is present, but it lacks any kind of kick. 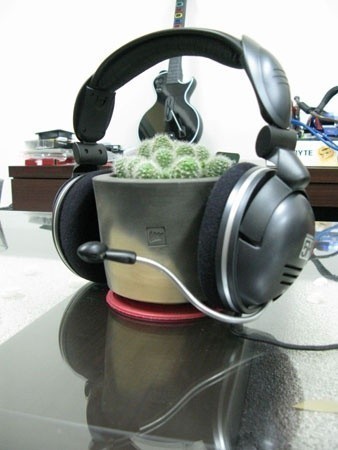 To get a better idea of the bass, I turn to some good old drum and bass to get it working, and Pendulum seems the perfect pick. The phat beats begin to pump through and they have nice clarity and definition to them, but I still have the feeling that I'm missing something.

It's time to get serious and break out an amplifier. My little Pioneer DTS-ready system should be able to give these cans a little more drive. Now the sound is a little meatier and I can definitely get some kick from the drivers. 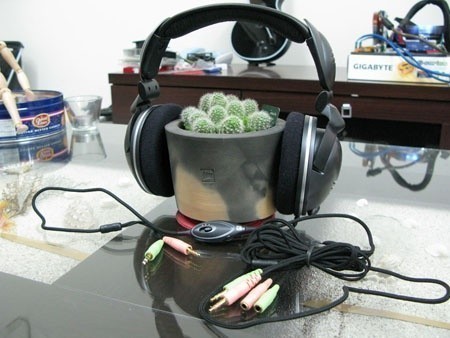 Now, seeing as these units are designed to be used as a gaming headset which gives you a balance of in-game sound effects and incoherent babbling from your opponents or team mates, it's time to get my game on.

The microphone in the these cans is a rather industrial looking metal snake that is retractable inside the headphone unit when not in use (accounting for some of the bulk on these units) and this is nice because the mic can be positioned and twisted to suit most peoples' taste. 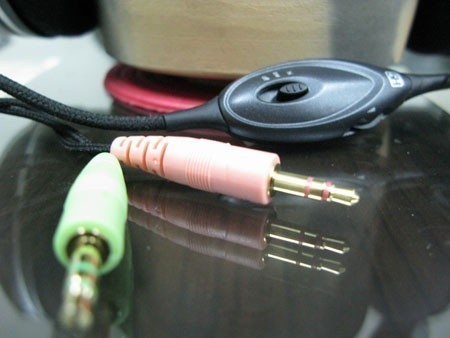 SteelSeries has redeemed themselves with their volume issues here by delivering some very clear voice chat abilities to my ears; I find that it's incredibly easy to hear the highly compressed voice data being piped in.

Another really good feature about the SteelSeries units is their shape; they are an over-the-ear affair and the padding is super soft without the horrible fake leather effect most headphones go for. This means that I can comfortably wear them on my noggin for many hours and not suffer the dreaded ear burn or head pinch that some headphone styles like to employ. 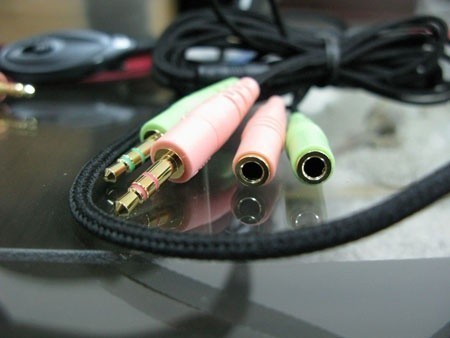 To round up the SteelSeries; they have one last surprise in stock which is the fact that they come apart into three sections, making them easy to pack and ensuring that the unit as a whole doesn't get snapped anywhere.

Onwards for Razer's Rebuttal, we go.

Razer are well known for their gaming peripherals, and now it's time to see if the Piranha will be another welcomed addition to their gear set. 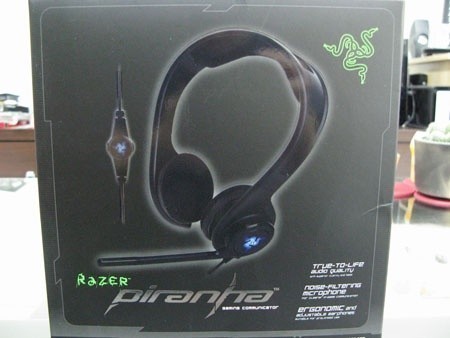 These units are smaller than the previous pair, but like the girls keep saying, "It's not the size that counts...", so again it's time to plug these babies into the 3.5mm ports on the back of the PC.

Colour coded jacks once again are a welcome sight, but these ones are a little smaller than the previous ones, so if you have big clumsy fingers like mine it might be difficult getting them in if it's tight with other cables down there. 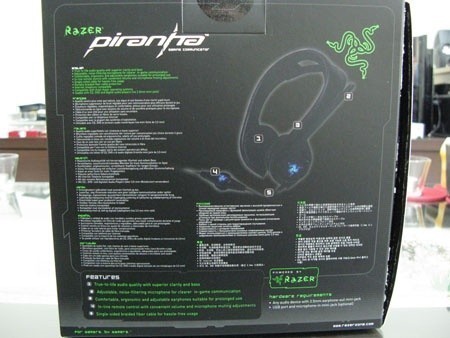 We will keep the same WAVs and MP3s as the first time around to ensure that it's a fair comparison of units, and remembering to turn the volume sliders all the way back to 50%.

The soft crescendos of Mr Dougan's melodies grace my ears, and this time it is a lot louder than the other cans. This can be accounted for by the smaller unit size meaning the drivers have to work less to give me the same volume levels. 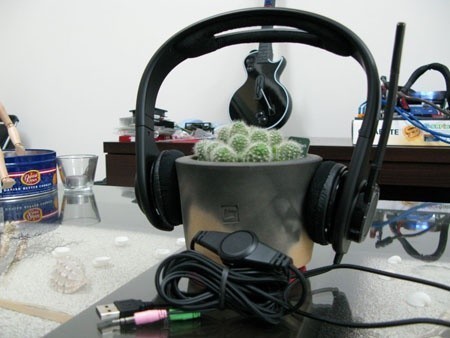 Because I like my music loud, I crank it right up to see how much the units can handle before they start to distort. The Piranha delivers when it comes to sound quality, too. It gets the highs and the thumping bass just right. This is all thanks to the smaller volume to fill between driver and ear canal.

Plugging these into the amp, I really get a sense of how good these units are with loudness vs. quality; every time I turn it up I get a great response and no distortion coming through.

When it comes to the multiplayer gaming aspect, these units have you covered nicely. They give a definite clear vocal range that lets me hear every word of the insults being thrown. The mic on the other hand does not perform as well as the previous unit; my pals informed me that I was always quiet with this unit on, so I often had to speak up which led to shouting when I got enthusiastic. This led to people knocking on my door, telling me to shut up; viscous circle. 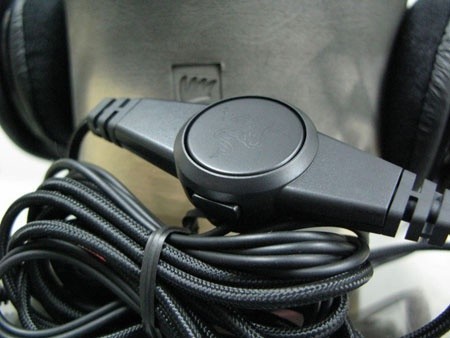 The microphone quietness I attribute to one of the design choices by Razer for the microphone boom, which results in less flexibility in mic positioning. It's not a real killer, however, as you can always dial in the microphone gain under Windows to get it right. 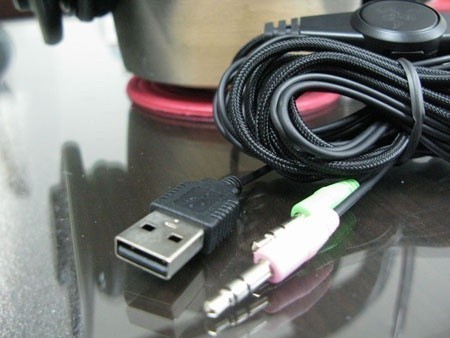 The biggest problem I had with these units was the pinch factor; they did unfortunately grip the ears a bit to ensure they stayed on, and this resulted in my ears getting hot as well as the usual pinching associated with prolonged usage. 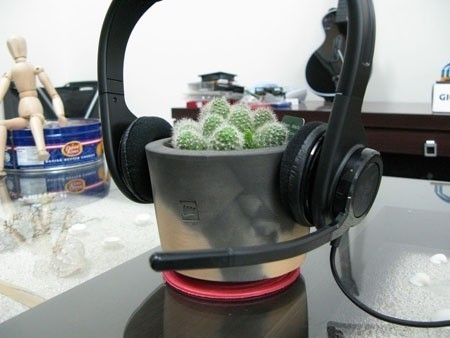 There is one more feature of the Razer Piranha that is pretty cool; they have a USB plug attached with the stereo jacks. This does nothing like adding USB stereo and microphone support unfortunately, but it does make the in-line control and the cans themselves light up the Razer tri-snake logo in blue; giving you the total bad-ass factor when you rock up at the next LAN party, especially with your Razer blue desktop setup as well.

It really is a tough choice between these two units here, because each has features that I would like to see in the other one.

If SteelSeries put in some more responsive driver units to deal with the volume issues, then they would be my firm recommendation.

The Razer Piranha on the other hand overcome the volume issue by going with a different style of ear pad sitting directly on the ear itself. However, it is unfortunate that this can lead to the dreaded head pinch and ear burn with extended use. Furthermore, the microphone placement is an issue; it would be nicer to have a bit more flex and stay with it to ensure you can get it near the mouth.

Now, here is what it can mean for you. If you are a hardcore gamer who spends lots of time with the cans on your head, I would have to say go with the SteelSeries. The sheer practicality of these units means that you can wear them comfortably for hours on end, and they give a great range of delivery so you won't miss a cuss.

If you are more of a casual gamer or you just like the shiny blue things (I fall into this category), then the Razer is more for you. Don't get me wrong, the Piranha is still an excellent gaming headset, but it suffers from two major stopping points that can mean the difference between a few hours on COD4 and an all night marathon. The head pinch factor can leave you a bit sore after a few hours and the units' inability to pack down into a smaller size can lead to breakage when packed in with the rest of your gear.

The conclusion is that both units will give you superb auditory performance and both are solid brand names that are reliably pumping out one solid product after another. The choice really comes down to your preference and style. 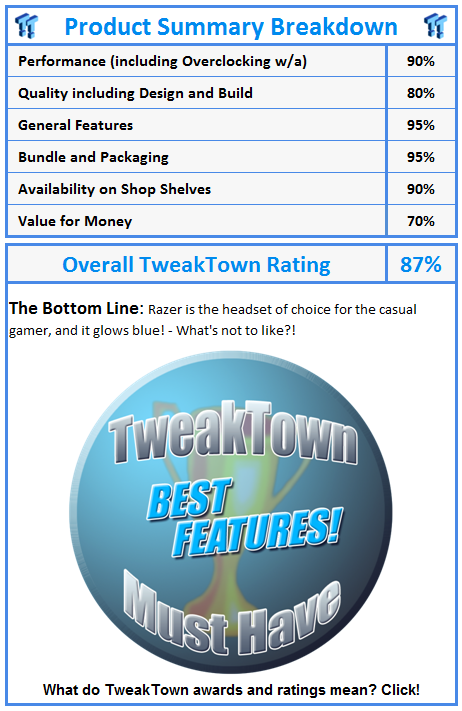 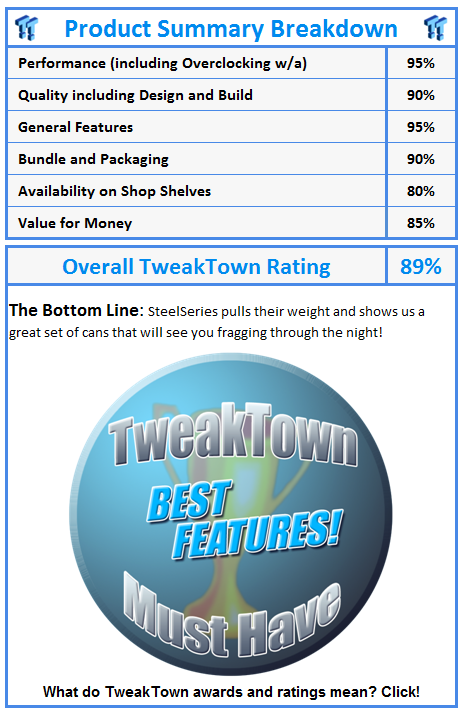