This might not sound like anything all too remarkable so far, but it seems like GECUBE will beat all the other AMD partners that are working on dual GPU cards, by simply being the first to market. GECUBE is expecting the Gemini 3 to be available in retail some time next month, but we weren't given an exact launch date or a price for that matter. 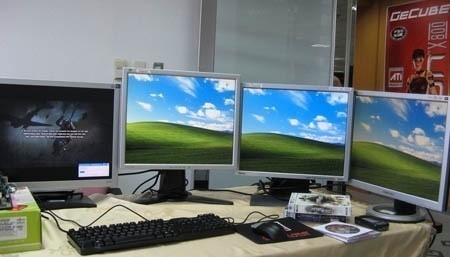 Another cool feature is of course that you can output to four displays from the Gemini 3, and all four ports are DVI as well. Port two and four are also compatible with HDMI via a dongle and will output a HDCP encoded signal to HDTVs. The card also has analog video-out over S-Video, composite and component. Although the card was running four HD streams when we got to the GECUBE offices, it was really struggling and it was dropping frames. However, it doesn't have any problem playing dual HD streams which some might find useful.

Unlike some other designs we've seen, GECUBE have done a really neat job of the four connectors by adding a small PCB which is connected to the card itself. Since the cooler is double width, this means that you're not wasting any rear space on your system either. 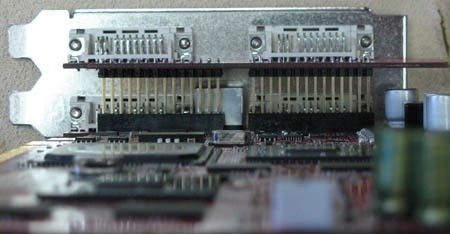 You might wonder how hot this card runs, as dual GPU cards in the past have been running really hot. Well, even after several hours of benchmarking (albeit on an open platform) the card was just warm to the touch. GECUBE has done a great job with the cooler here, although it was quite noisy. 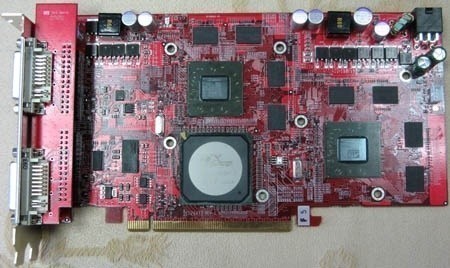 The memory chips on the sample board we tested were rated at 2.5ns, but production boards will use 2.0ns chips. This should allow for some overclocking, although we're still hoping for a version with GDDR3 or GDDR4 in the future. Another thing you'll notice is that this card doesn't have any Crossfire connectors like the Sapphire card, so quad Crossfire is a no go with the card. On the upside, it's only using a single 6-pin PCI Express power connector, so it doesn't draw all that much power. 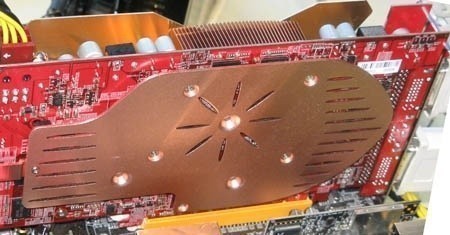 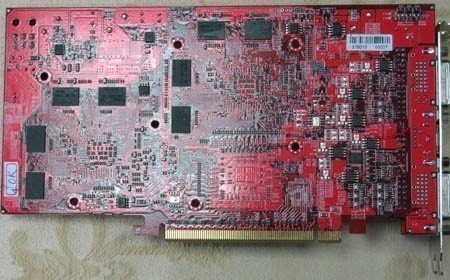 There's very little to get excited about around the back of the card, the memory modules are covered by a large heatsink attached to the front, but not with a heatpipe, just a piece of metal. 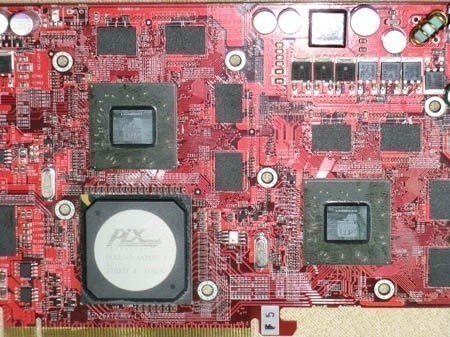 The trick of this card is the PLX PCI Express switch chip, this allowing the two GPUs to work in Crossfire mode. The other two chips you can see on the picture above are the GPUs. It's actually quite amazing how compact this card is compared to some of the other samples we saw back at Computex earlier in the year, although none of those were final production models as far as we know.

So, what about benchmarks? Well, we didn't have access to our normal test platform, so the numbers we have aren't exactly comparable to what we normally do. The test system consisted of a Pentium D 3.4GHz, 4GB of DDR2 memory clocked at 667MHz, an ASUS P5W DH 975X motherboard and a Maxtor DiamondMax Plus 9 SATA hard drive.

We only had an afternoon to play with the Gemini 3 and we will follow up with a full-on review of the card at a later date. We tested it in Crossfire mode in 3DMark05 and 06, as well as in Company of Heroes and Call of Juarez; all tests were run in Windows XP. Unfortunately though, due to time constraints we were only able to run 3DMark06 at 1280 x 1024 with Crossfire disabled.

As you can see from the results, the Gemini 3 offers some pretty good performance increases in Crossfire mode compared to single GPU mode. It's not twice the performance, but in Call of Juarez it's close at 1024x768. It's not an amazingly fast card but in this case there's two issues, first of all the CPU we used is not as fast as the one we normally use, and secondly we have a feeling that the DDR2 memory is holding back the full potential of this card, but more on that in the full review.

We hope you've enjoyed this first looks of the GECUBE Gemini 3, and with the right price and slightly tweaked drivers this should be an appealing solution for those that don't have a dual x16 system but still want to enjoy the benefits of running Crossfire.