Wednesday this week our friends at MSI had a big launch event for a wide range of new products here in Taipei and TweakTown was on the guest list of invitees.

Not only did MSI launch a range of new Santa Rosa notebooks, but also on display were new motherboards and graphics cards. Due to the amount of products that were shown, the report from the event will be split up in two parts. The first will cover the motherboards and graphics cards and the next part will cover the notebooks and give an introduction to the new Centrino platform, previously known as Santa Rosa.

For everyone interested in MSI's upcoming P35 and G35/33 motherboards, we have quite a lot of information and plenty of pictures from the launch. 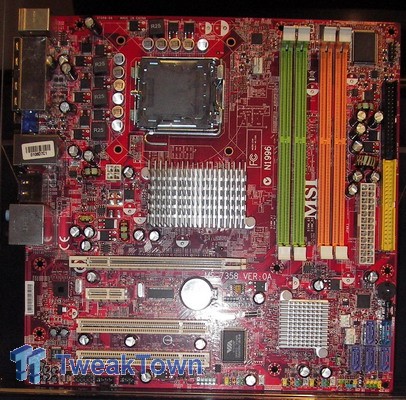 You might already have read our review of the MSI P35 Platinum, but if you have not, then we suggest you go and read it once you have finished reading this. Let us start with the low-end boards here, the three G33 boards that MSI was showing. The G33M, G33MDH and the G33 Neo are the product names and they are virtually identical. The difference being that the G33MDH is Viiv certified, and the G33 Neo is full ATX size, while the other two are mATX. We could not make out any differences between the two mATX boards other than the ICH9 southbridge. 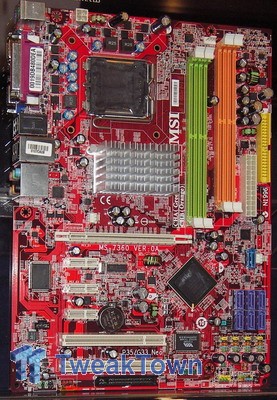 All three boards support 1,333MHz bus speed and DDR2 memory. There is one x16 PCIe slot, one x1 PCIe slot (three for the G33 Neo) and two standard PCI slots for expansion. The mATX boards have four memory slots, six rear USB 2.0 ports, two eSATA ports, Gigabit Ethernet, two PS/2 ports, 7.1-channel audio outputs and a D-Sub. The G33 Neo has the same specifications, although it adds a parallel port, a serial port and FireWire, but loses out on two USB 2.0 ports and eSATA. There are a further five internal SATA ports (seven for the G33 Neo), one of which belongs to a separate controller that also adds an IDE port. 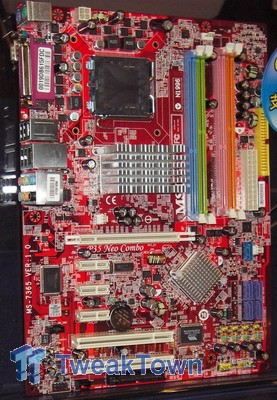 Next up is the P35 Neo, which to all extent looks the same as the G33 Neo and has the same features, except it does not have integrated graphics and it is hence missing the D-Sub connector. The next board is slightly more interesting, the P35 Neo Combo - which has already made its way online for some reviews - as it features both DDR2 and DDR3 memory slots. For some reason MSI decided to cut off two SATA connectors on this board, which makes absolutely no sense at all. The rest of its features are shared with the P35 Neo. 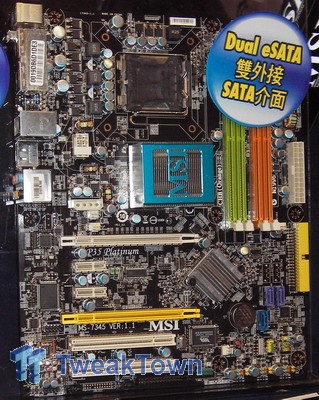 Climbing up the scale we find the P35 Neo2, which has more in common with the Platinum boards based on the same chipset than it has with the Neo boards. It has got a black PCB and the layout is very similar to the Platinum series, but it lacks the intricate heat pipe cooling of the Platinum boards. Instead it has got a simple heatsink with a blue MSI logo on it. Feature wise this board has a lot going for it as it has six rear USB 2.0 ports, two eSATA ports, FireWire, 7.1-channel sound with optical S/PDIF out and Gigabit Ethernet. The oddest thing about this board is that it only has three internal SATA connectors; this is less than you get on most motherboards these days, and less than what you have been getting for some time. This goes back to MSI's odd choice of using the Intel ICH9 for the eSATA connectors rather than a third-party chipset. It has dual PCIe x16 slots for graphics cards, but as with the P965 chipset, the P35 only supports x4 bandwidth on the second slot. 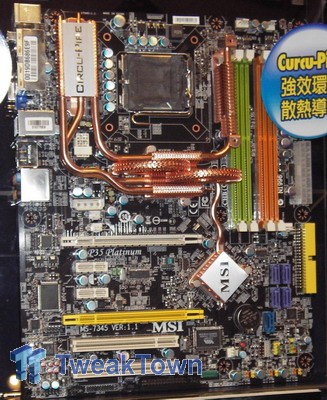 For some rather bizarre reason MSI also decided to make a G33 Platinum board. We are not sure about you, but we would not want to spend loads of money on a motherboard with this level of integrated graphics. It features the new fancy Circu-Pipe chipset heat pipe from MSI. The board shares the same features as the P35 Neo2, but has a full set of SATA ports, which makes it a total of five, as well as integrated graphics thanks to the G33 chipset, hence the D-Sub connector on the back. This board also supports an optional TPM (Trusted Platform Module) add-on via a connector below the bottom PCI slot. 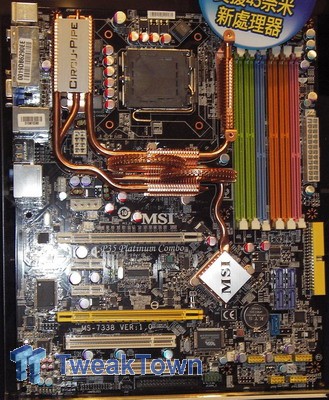 Next up is the P35 Platinum, which is exactly the same as the G33 Platinum, but without the integrated graphics. MSI also did a Combo board in the Platinum series, the P35 Platinum Combo, which has a total of six memory slots, four for DDR2 and two for DDR3. Again it shares the same features as the G33 Platinum and if you look really closely you will notice that this early board has a D-Sub connector, although it is unlikely that this will be on the final boards, as they will not have integrated graphics. 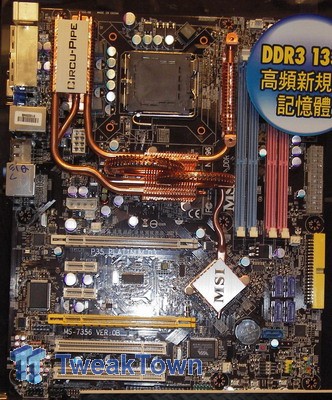 Finally we have the P35 Diamond, the top of the range P35 board from MSI. We have to say that we were disappointed when we saw this board as the only difference in terms of features is that it supports DDR3 and DDR3 only. The layout differs slightly to the other boards, but it offers exactly the same features. Past Diamond boards from MSI have always offered some extra functionality and some models even featured X-Fi sound onboard, but not this one. Again, this is an early board and it features that odd D-Sub connector seen on other boards without integrated graphics. Only MSI can answer why its early revisions feature a D-Sub connector, but it is something we will ask about the next time we get a chance.

Now, for those of you that have been waiting for the graphics cards, you are in for a treat, as MSI showed its entire range of Radeon HD 2x00 cards. First up is a pair of Radeon HD 2400 Pro cards, one full size, passively cooled, 256MB card and one half-height, actively cooled, 128MB card. Both cards use DDR2 memory, but sadly no clock speeds were given for either card. Both cards had a DVI connector and TV-out, while the half height card only offered a D-Sub as a wired option. 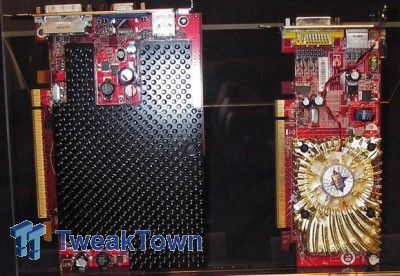 Next we have the MSI RX2600XT-T2D256E, which as it happens, is a Radeon HD 2600XT with dual-DVI, TV-out and 256MB of GDDR4 memory. Again a total lack of clock speeds, but the interesting thing here is that it is an MSI design and it is using a black PCB. The cooler actually looks quite similar to that of the Radeon X1950XTX, but without the heat pipe. The card features internal Crossfire connectors and there was space on the back of the card for additional memory for a 512MB version. Interestingly, this card did not feature the extra power connector that we expected it to have, although there is space for a power connector at the top of the PCB. 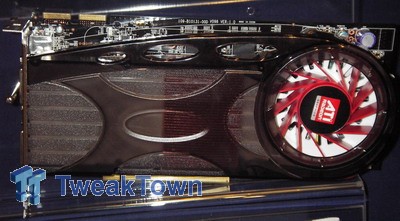 Finally we have the card that you have all been waiting for, the RX2900XT OC Liquid. OK, yes we know, the name is not exactly going to make you go "ooh, aaah" but hey, it is the first water cooled Radeon HD 2900XT to be shown by anyone, so do not knock it! MSI has made a rather interesting design here. For starters, the small pump is powered directly from the card, as it is connected to one of the two fan headers. Then there are the two waterblocks attached to the massive heatsink that is covering almost the entire card. Presumably the first of the two waterblocks is cooling the GPU, while the second smaller waterblock is cooling the digital MOSFETs for the power regulation. It is a shame that the two waterblocks are connected with such a long piece of tubing, as this is not a pretty solution. The radiator is cooled by a 120mm fan, however, we are curious where you are going to fit this, unless you have got a massive case in which you can fit the radiator on the side panel. 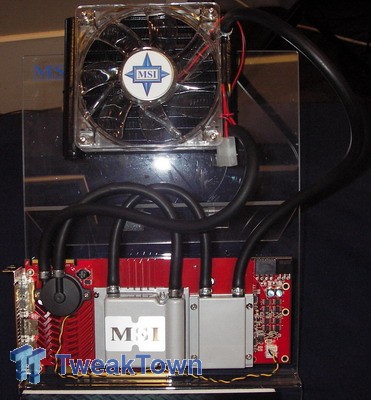 But let us not forget about Nvidia, as MSI makes Nvidia based graphics cards as well. Two interesting designs were on display, both based on the GeForce 8600GTS. The first one was a passively cooled version of the standard MSI design with dual-DVI ports and TV-out, great for those that want decent gaming performance without the fan noise. But the part that really stood out was the NX8600GTS Diamond Plus, as this card featured a dual-slot fan cooler - although we are not sure why it was dual-slot - but more importantly this is the first 8600GTS card with HDMI to appear from one of Nvidia's partners. The card also has one DVI port and TV-out. Strangely enough this card uses a standard four-pin Molex connector for power instead of the standard six-pin PCIe power connector. 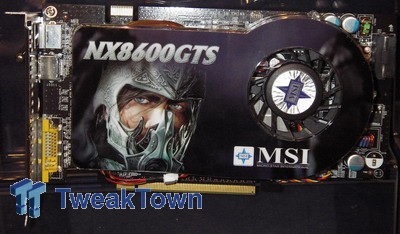 That is all for today folks, but make sure you check back with us soon for an update on MSI's Santa Rosa based notebooks with the new Nvidia 8-series mobile graphics cards.