Kioxia (formerly Toshiba) was the first to market with PCIe Gen4 enterprise SSDs, or at least that's how we remember it going by 2019 Flash Memory Summit recollection. Fast forward to today, two years later, and we've finally gotten our chance to see firsthand what PCIe Gen4 looks like as served up Kioxia style. We've already taken Intel's newest PCIe Gen4 P5510 Enterprise SSD for a spin and seen for ourselves what double the bandwidth can bring to the datacenter as well as SMB's.

Obviously, as the second-largest producer of NAND on the planet, the CM6 is arrayed with Kioxia's 96layer BiCS4 flash. BiCS4 96Layer TLC Flash has been around for going on three years now, and although we've seen others bring to market newer flash with higher layer counts, we've not seen any that can deliver real-world performance that can match good ole Kioxia BiCS 4. We've observed this truth in the consumer space where our real-world performance leaders have one thing in common, and that's BiCs 4 flash arrays. Now we will demonstrate this happening in the enterprise space as well. Remember, it's not about sequential speeds, nor is it about 8K random performance at QD256. It's really about how well an SSD can put it all together and deliver real performance where it matters most. 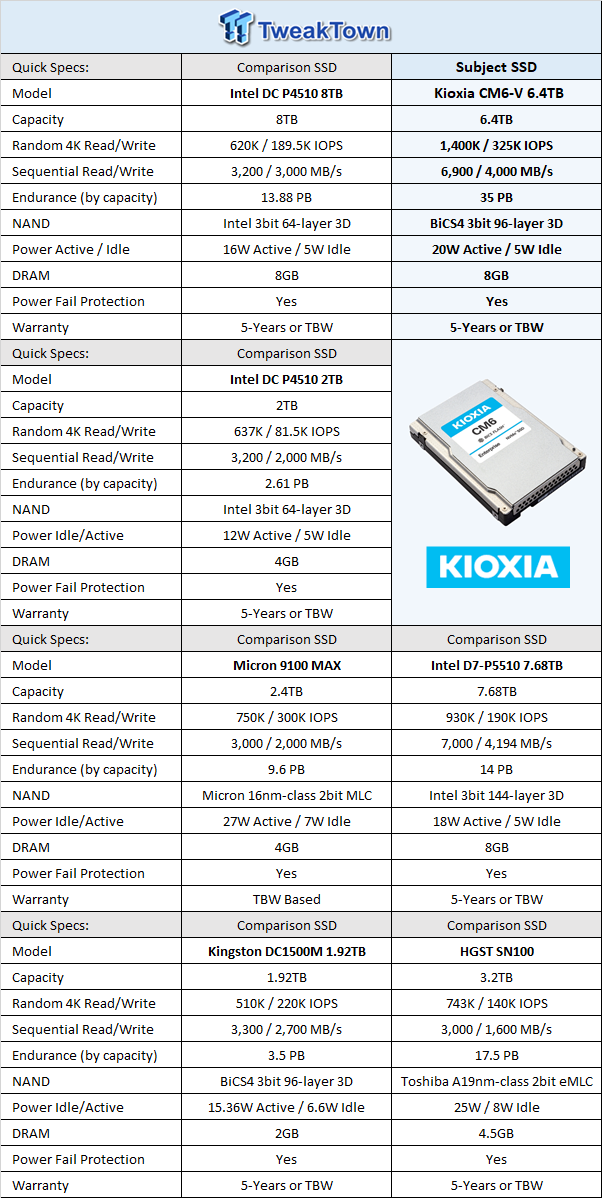 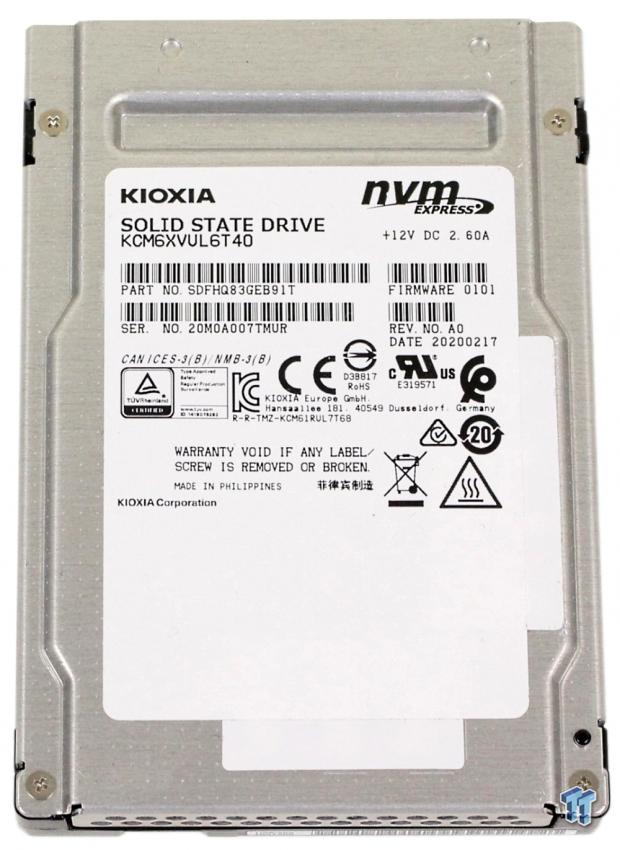 This side of the drive features a familiar-looking manufacturer label. 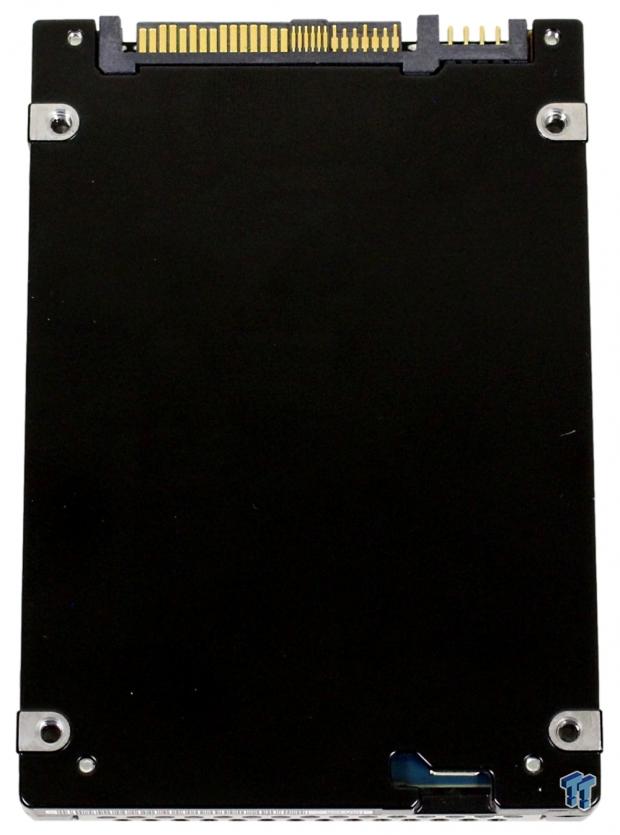 The bottom of the drive's enclosure is a heavy-duty cast aluminum piece that serves as a heat sink. 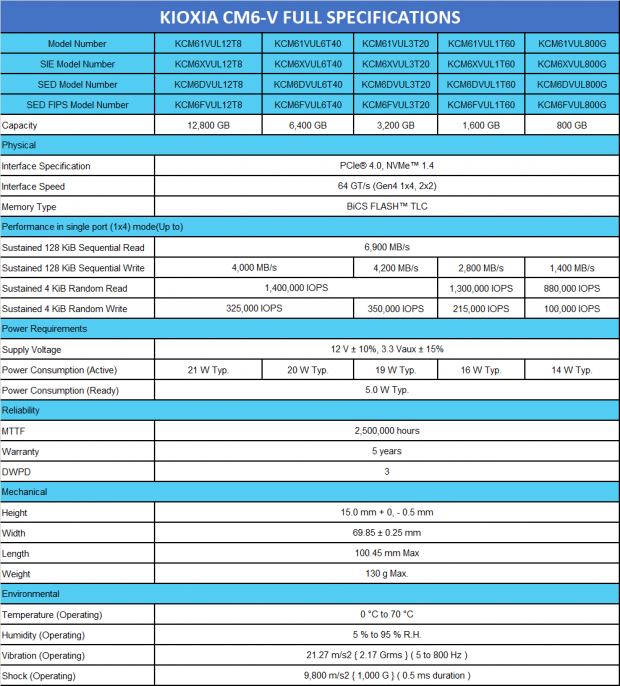 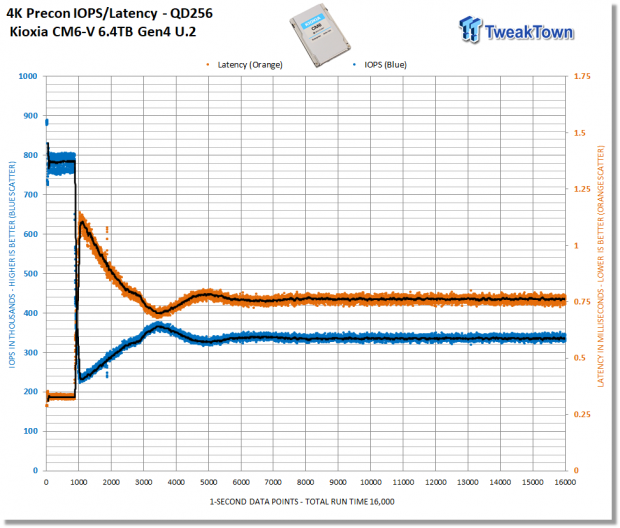 Steady-state is achieved at 8,000 seconds of preconditioning. The average steady-state write performance at QD256 is approximately 330K IOPS. The relatively tight pattern with virtually no outliers indicates a high QoS. 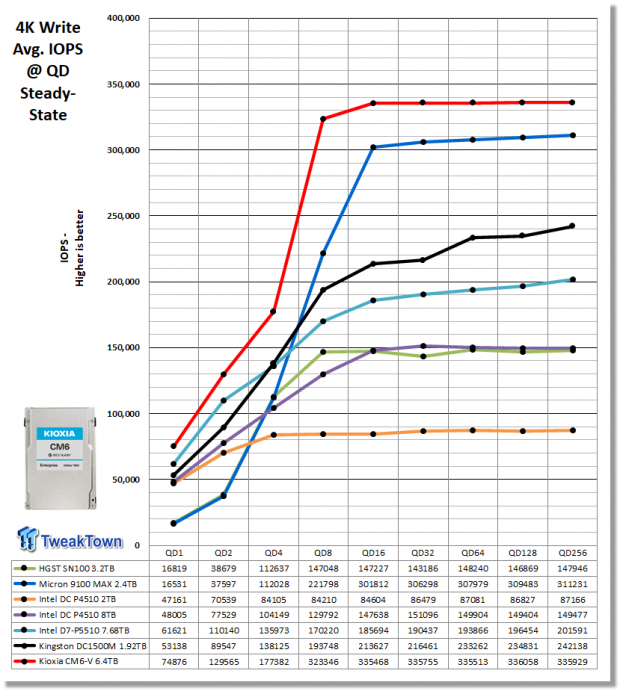 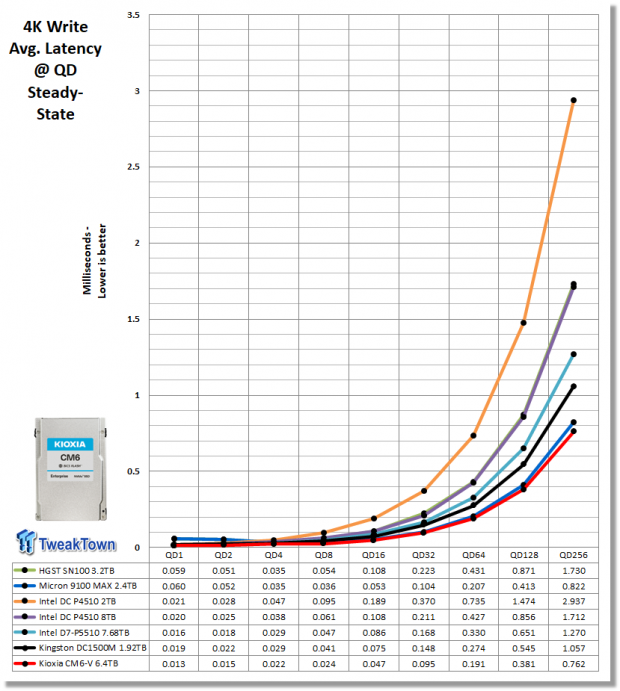 We have no problem sustaining 335,000 4K random write IOPS which is 15K better than the stated sustained random write spec. At every measured queue depth, the CM6-V is outperforming its competition by a significant margin. Impressive. 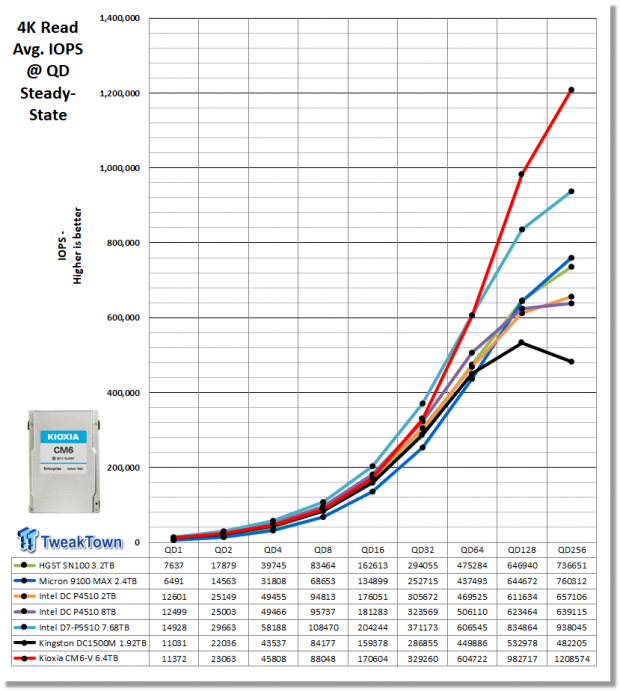 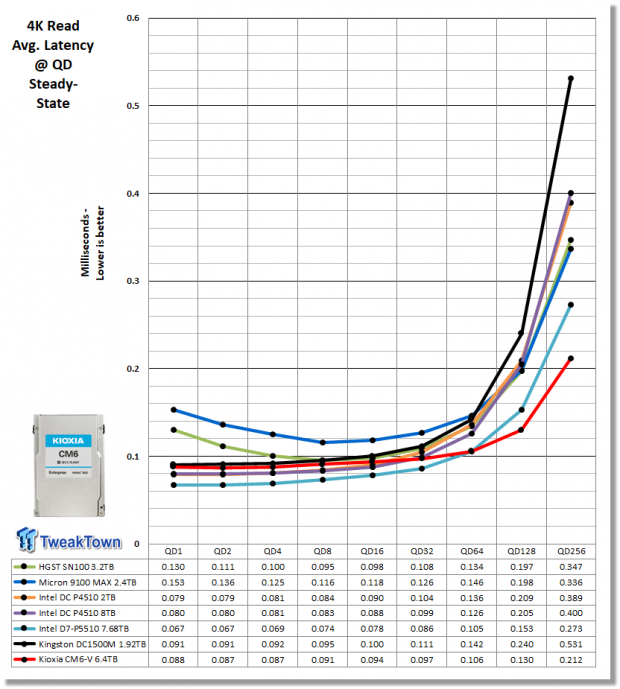 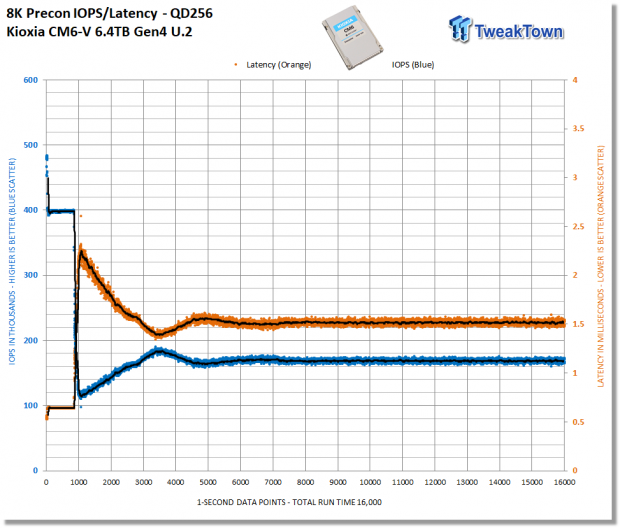 Steady-state is achieved at 9,000 seconds of preconditioning. The average steady-state write performance at QD256 is approximately 168K IOPS. 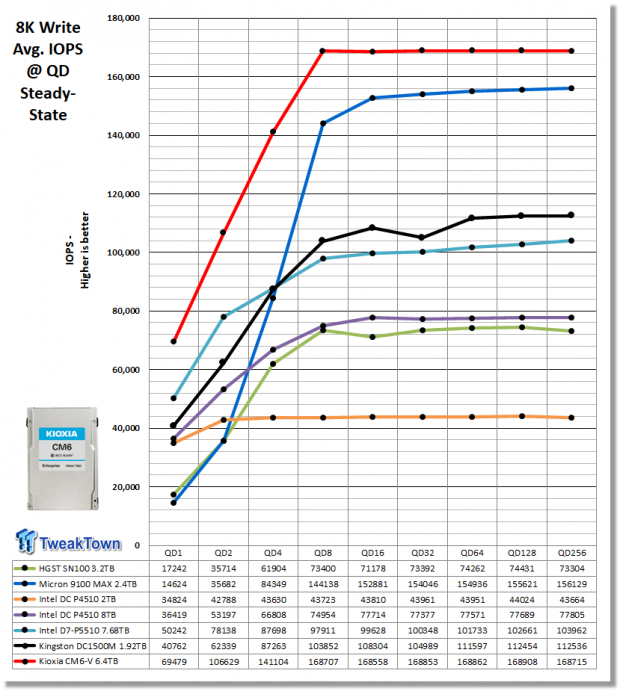 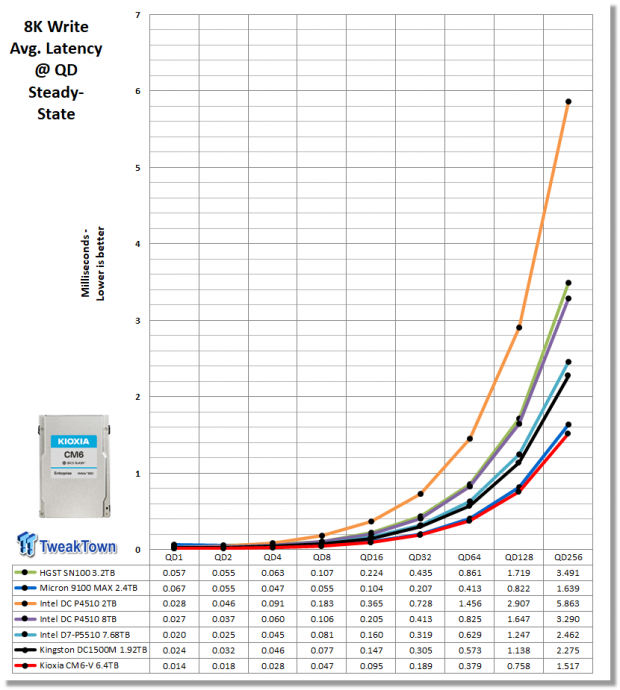 We expect 8K random to track exactly the same as 4K random, just at a 50% lower rate. The CM6-V performs as expected. Low queue depth performance is phenomenal, certainly the best we've seen from a flash-based datacenter SSD. Performance that matters. 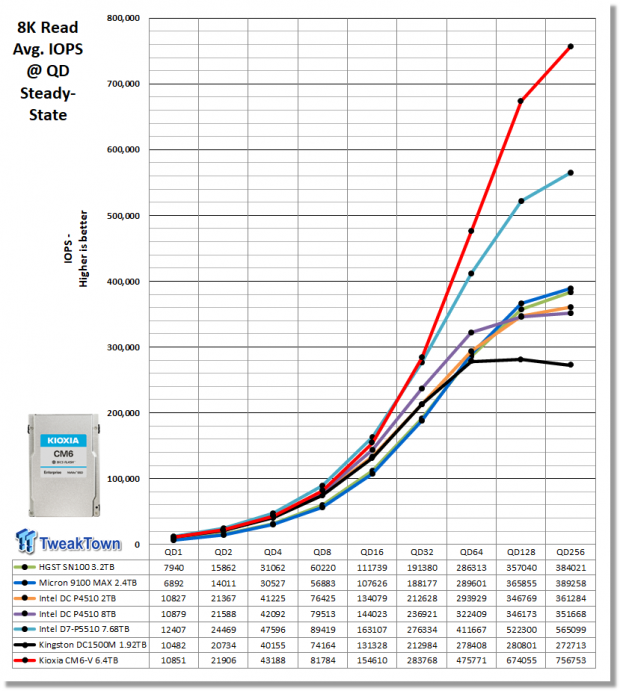 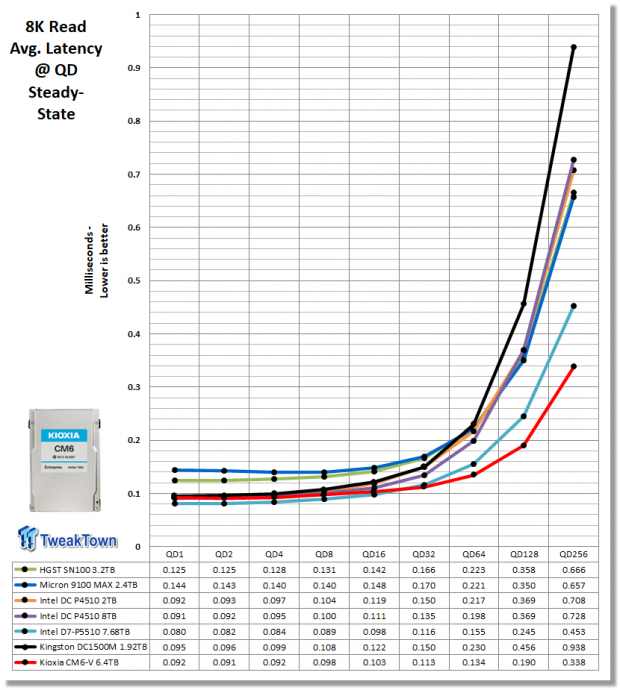 Here the CM6-V takes charge at QD32 and proceeds to lay waste to the competition as queue depths increase. We are seeing a mind-blowing 756,000 8K random read IOPS at QD256. Wow. Again, Intel's 144L flash has the advantage at lower queue depths when the workload is pure 8K random read. 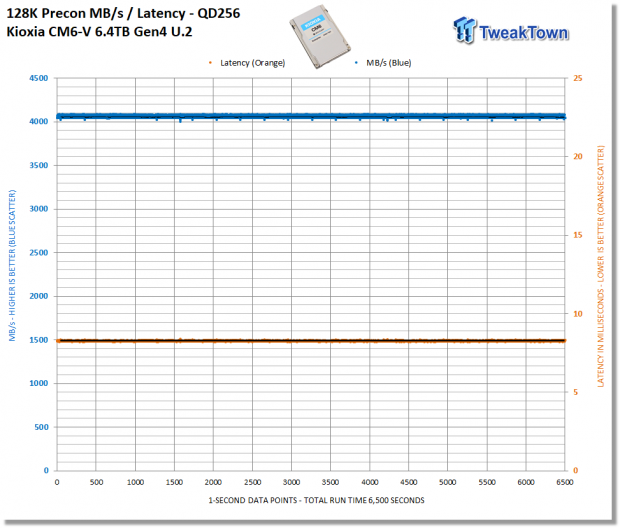 We precondition the drive for 6,500 seconds, receiving performance data every second. Steady-state for this test was already achieved when we filled the drive with 128K seq data. The nice, tight pattern we are seeing indicates a high QoS. Excellent. 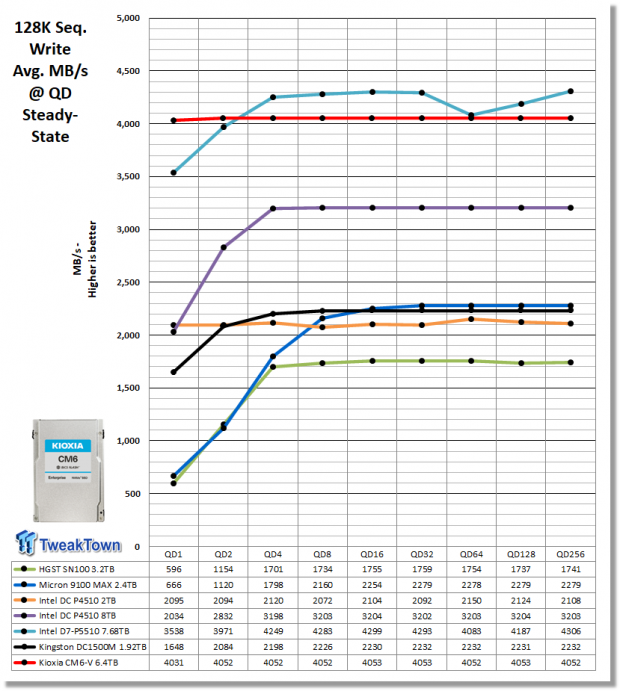 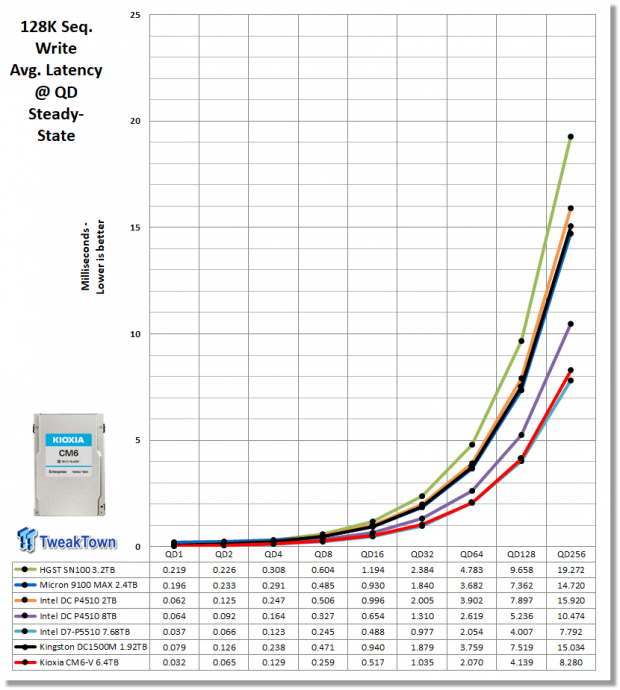 Our testing indicates factory sequential write specifications to spot on. More impressive, however, is that the CM6-V can deliver its max sustained write performance at QD1. Amazing really. 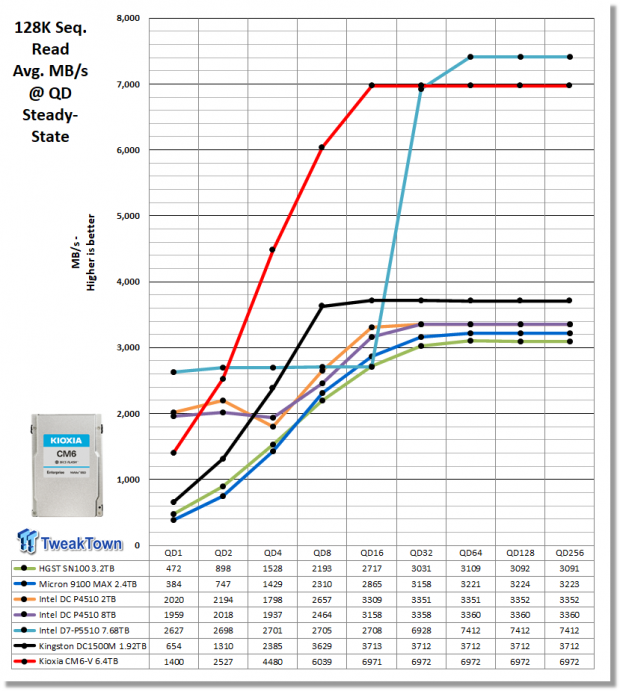 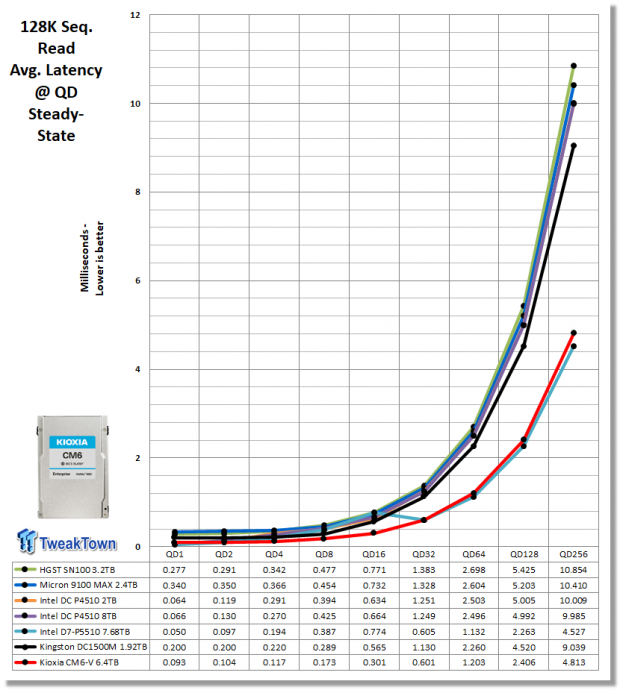 Again, factory specs are spot on. 6,900 MB/s is head-turning sequential performance, but we are more impressed with how the CM6-V gets there. Look at that performance curve. It's exactly what we want to see. Look at how inferior the performance curve of the Gen4 P5510 is. Intel's P5510 can deliver a little more at queue depths above 64, but it doesn't even swing into action until QD32. As we see it, this is a big win for the CM6-V.

An Email Server workload is a demanding 8K test with a 50 percent R/W distribution. This application gives a good indication of how well a drive will perform in a write-heavy workload environment. 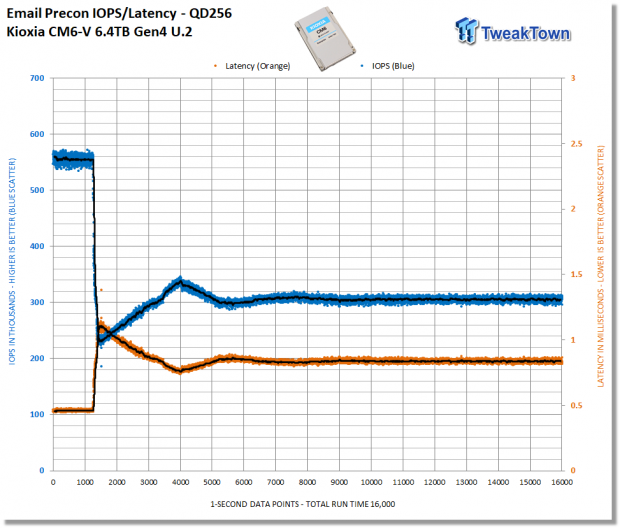 Steady-State is achieved at approximately 9,000 seconds of preconditioning. The average steady-state workload performance at QD256 is approximately 300K IOPS. Impressive is an understatement. 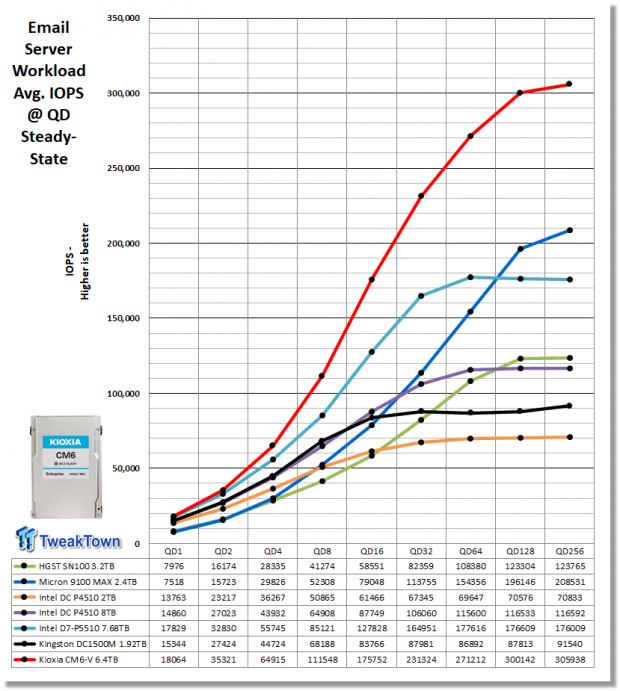 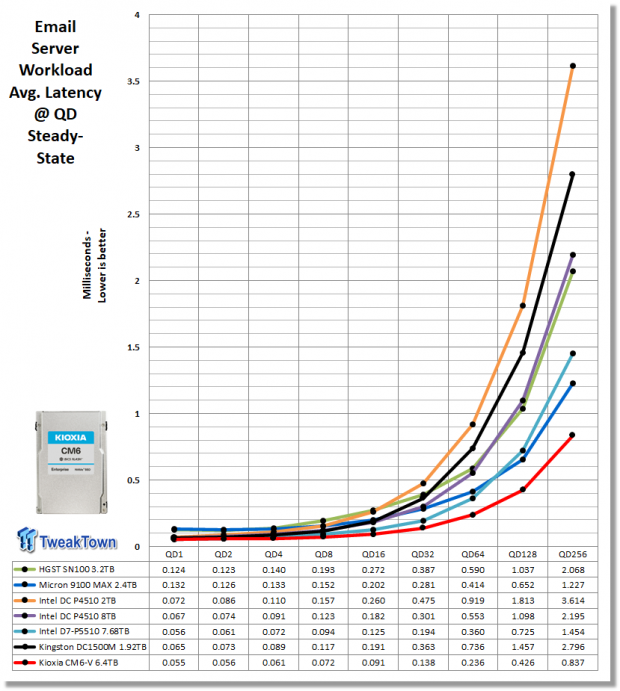 This chart demonstrates exactly why we believe Kioxia BiCS4 flash is the real-world performance leader. We see it in consumer SSDs, and now we see it on the enterprise front. This is real performance where it matters, not something purely synthetic like the previous tests we ran. Performance that matters and performance without equal where it matters most is what the CM6-V is dishing out. 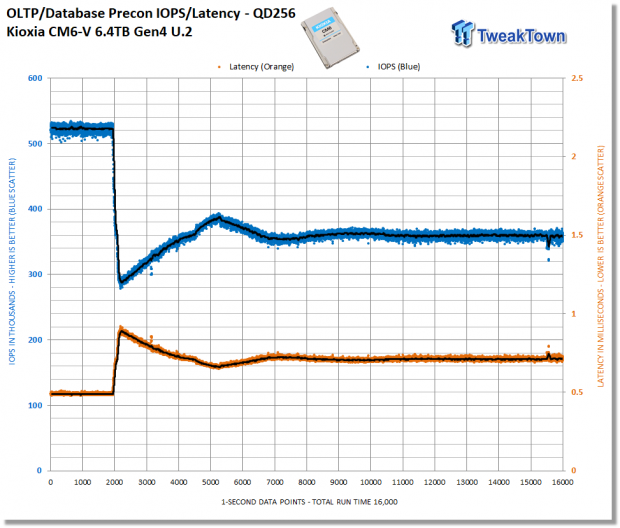 Steady-state is achieved at 11,000 seconds of preconditioning. The average steady-state workload performance at QD256 is a lofty 360K IOPS.

QoS is indicated as excellent. 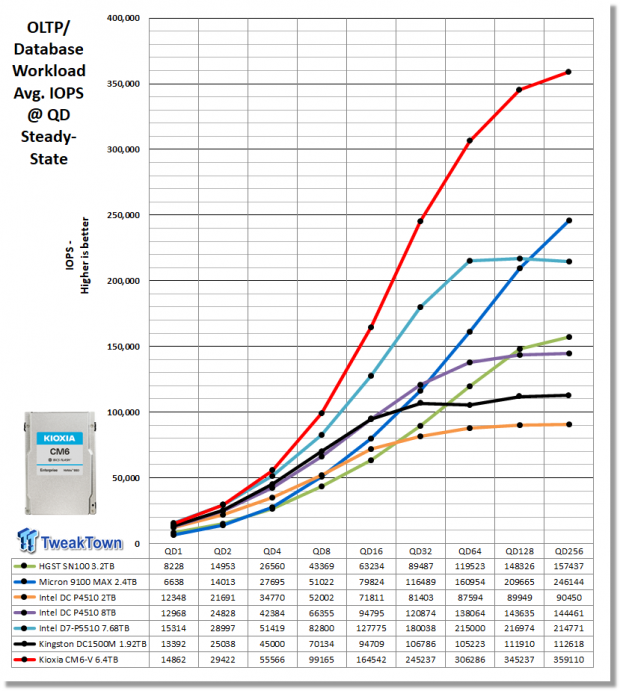 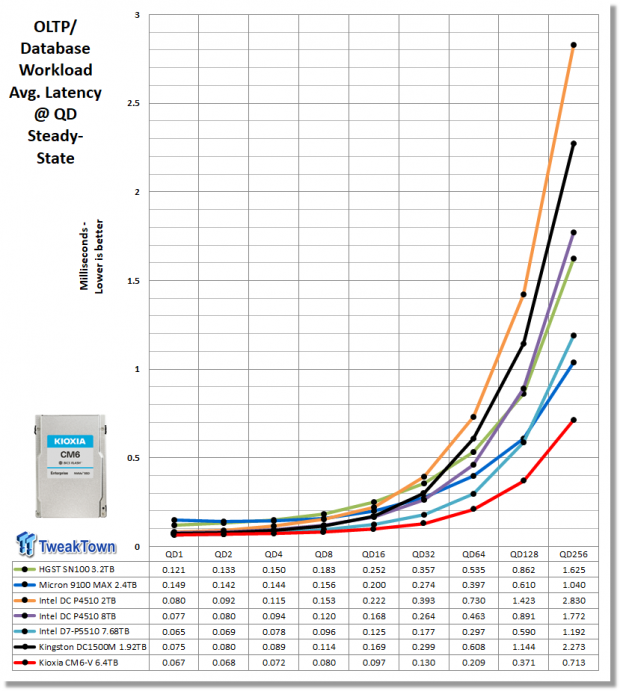 As stunning as its Email Server performance is, its OLTP/Database performance is even better. We have competition in name only because the CM6-V has no flash-based competition, at least not in our test pool. Real performance where it matters.

A Web Server workload is a pure random read test with a wide range of file sizes, ranging from 512B to 512KB at varying percentage rates per file size. 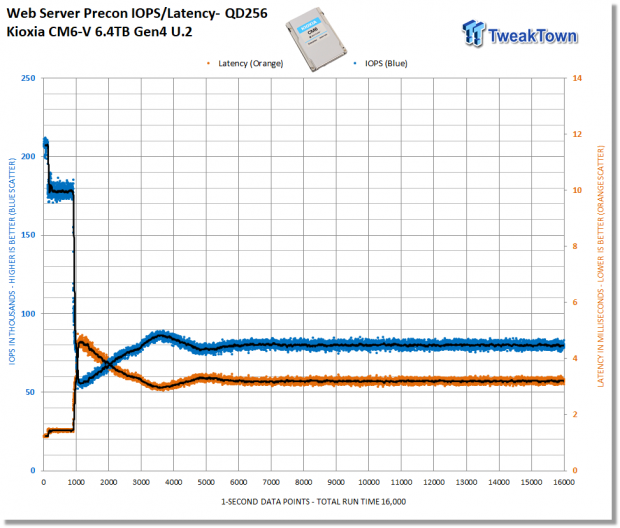 We precondition for this test with an inverted (all-write) workload, so no relevant information can be gleaned from this preconditioning. 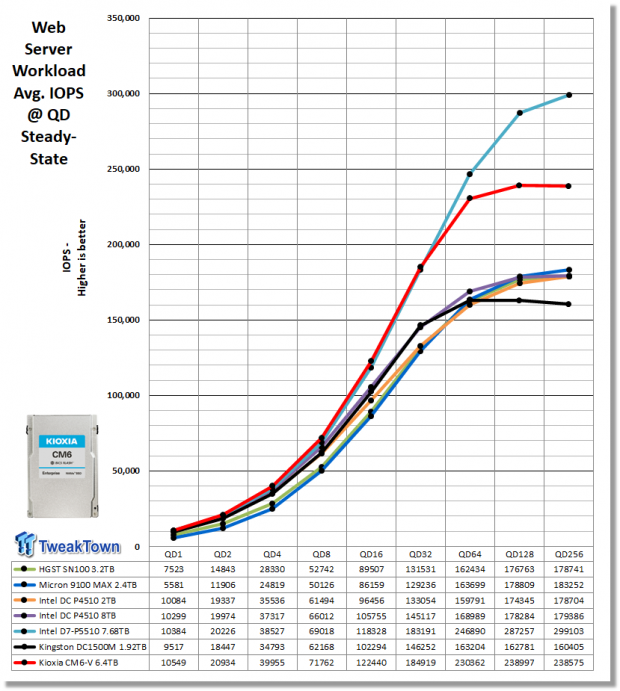 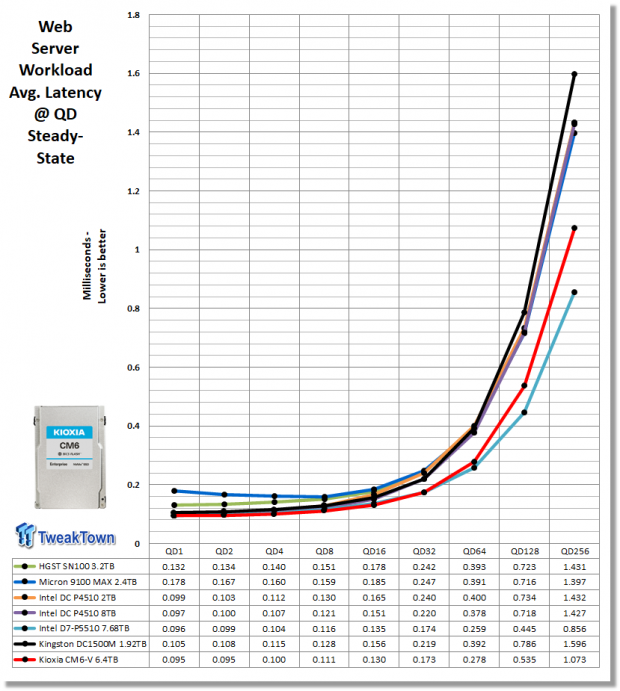 Intel's P5510 comes out on top at queue depths of more than 32. However, we see that as too little too late and give the win to the CM6-V because it maintains a small lead with this difficult pure read workload in the typical operating range.

The CM6-V was the first Gen4 enterprise SSD, and it has shown itself to be the best to date. This is quite amazing and serves to cement our belief that Kioxia BiCS4 96L TLC is the best performing common flash currently employed on any SSD, whether they be consumer or enterprise like the drive we tested today. Other flash can reach higher speeds but cannot match BiCS 4, where the rubber meets the road. 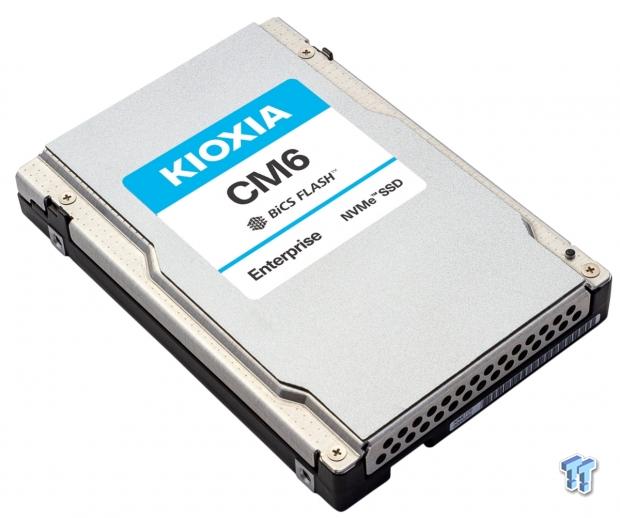 What's the best performing flash-based enterprise SSD we've ever tested? That's easy. It is Kioxia's mighty CM6-V. Not only is it by far the best performer, but it is also the most enduring we've seen to date. ROI without equal. Impressive in every way, the Kioxia CM6-V has earned TweakTown's highest award.