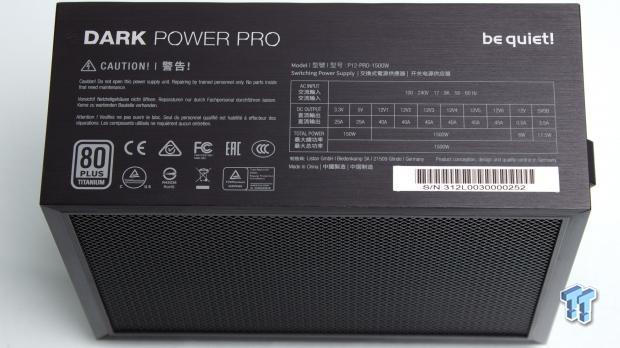 Be quiet! It is rightfully known for their chassis offerings and their build quality, as I have shown in the Dark base Pro 900 V2 and several others over the past year. However, one thing that be quiet! also does well is cooler and power supplies. The latter is what we are looking at today.

The Dark Power series of PSU are their enthusiast's grade high-performance models with normally very high wattage and amperage ratings. These units have some features specific to XOC or extreme enthusiasts, which help it be more flexible and apt for the usage.

One of the key features I like for the Dark Power Pro 12, which we are looking at today is, the overclocking key or OC jumper. This can enable the PSU to switch to a single-rail mode, which is good for when running several GPUs in tandem on LN2 or an XOC environment. 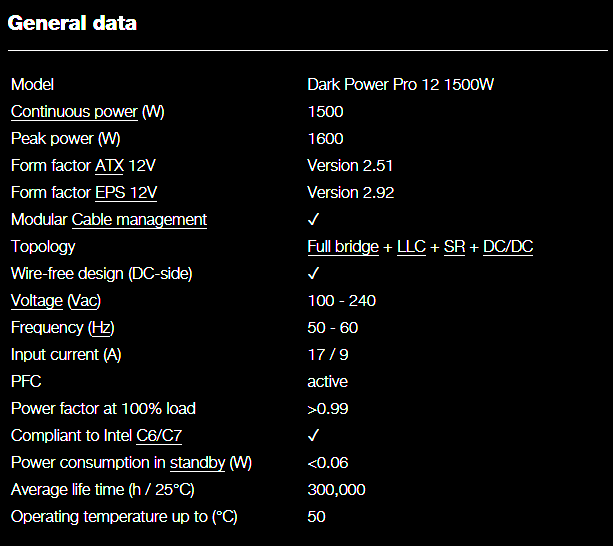 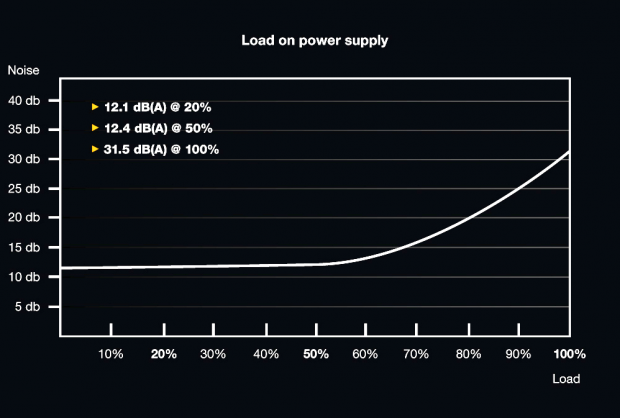 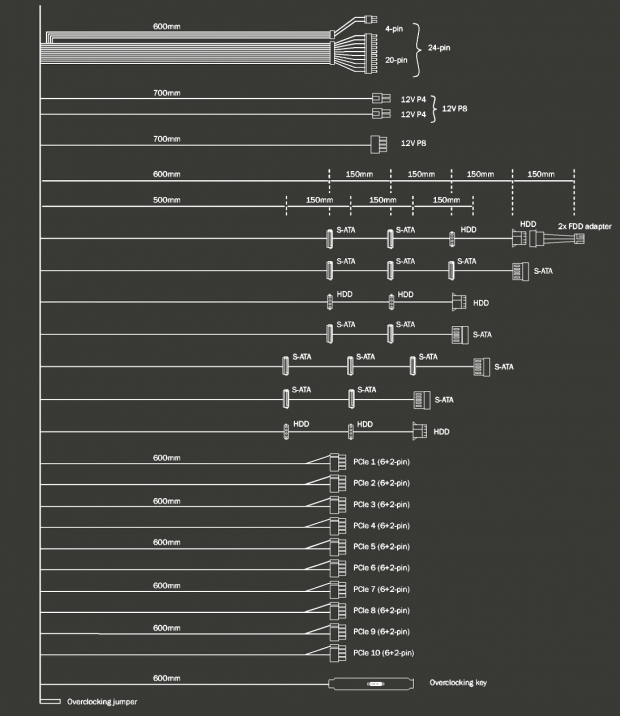 The PSU we have today is the be quiet! Dark Power Pro 12 1500W Titanium ATX power supply. This is a long name, but it explains what the PSU series is along with its rating and 80 plus rating. Being 1500W tells you that it's not made for your everyday gaming PC with a single GPU, that would put you in the 25-35% loading range in most cases, which is well below the desired 45-55% loading range which will provide optimal efficiency.

This PSU is more suited for either XOC enthusiasts or larger multi-card workstations, where you are looking to drive several processing GPUs for rendering or offload processing that requires a lot of available amps. The reason I make this statement is I have seen several users who have systems with an i5 and a 2060 or the like, which likely pulls around 350-400W on its toughest day, and they have a 1000W PSU backing it. I am all for building in excess, but the efficiency when loading a PSU to less than 10% of its load, which most of the web browsing and light load, or even gaming loads may pull, will put you in a very bad efficiency range that simply doesn't make sense.

The recommended retail price for the Dark Power Pro 12 1500W Titanium is $519, which is high, but is expected for PSU of this caliber. For comparison, one of the few competitors to this PSU would be the Corsair AX1600i at $559.99. We will do our best to load the new Dark Power Pro 12 1500W with our test system to see how it stands up in the following pages. 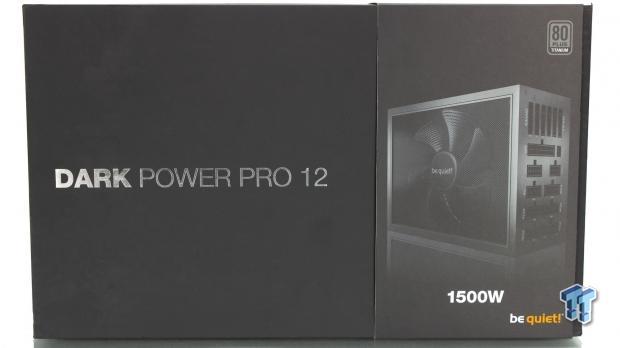 The front of the package shows that the outer piece is a partial sleeve that denotes the wattage and has the PSU image. This is likely to save cost by not printing the thick package for each PSU model, which is not a bad idea, as depending on the region, this sleeve can be various languages or other data as needed and would be much easier to print and apply accordingly. 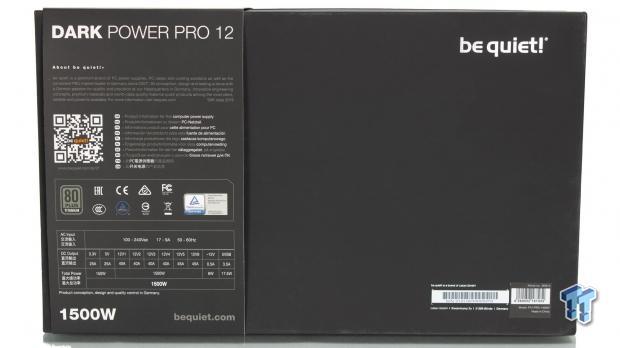 Flipping the box around and on the rear, we find the sleeve portion carries a lot of spec data, while the inventory control labels are affixed to their designated locations on the main hardboard box. 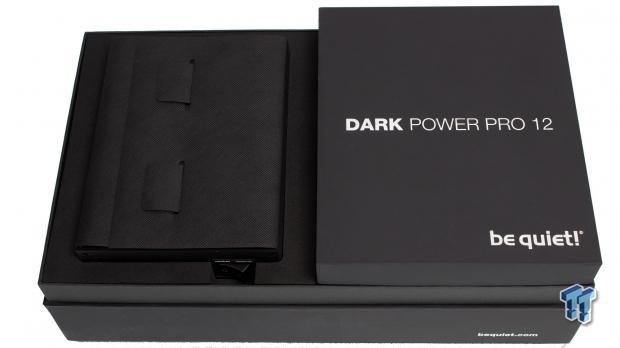 Opening up the main box and the PSU greets us, which is wrapped in a fabric sleeve and placed in a dense foam to protect the unit during transport. To the right, we have another box lid, which is where we will find the cable and accessory sets. 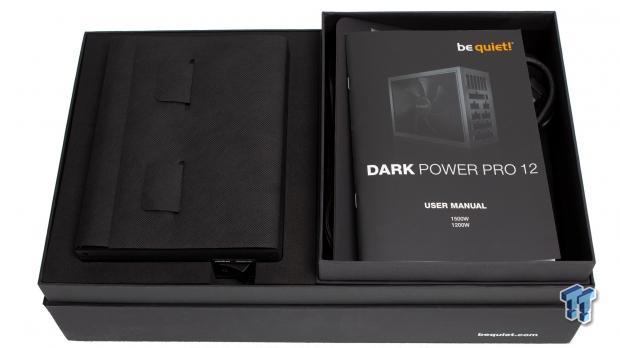 Pulling the lid, we see the manual and the cables below it. Let's take a look at the cabling and accessories next. 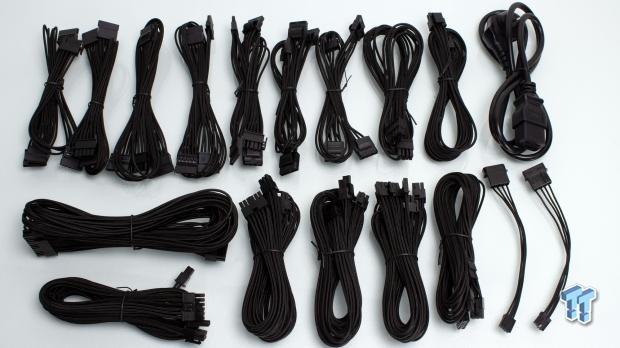 First up is the cabling, which I am happy to report are all black woven sleeved. This makes for a premium feel and aesthetic, and something I think should be a requirement of any top of the line PSU. The cabling is assorted as below:

One thing worth noting is that this PSU uses the C19 style connector. This is used for higher amperage units, and this one like most over 1200W range will have. The AC cable supplied with our unit was an EU style plug, but luckily I have a US-style cable. 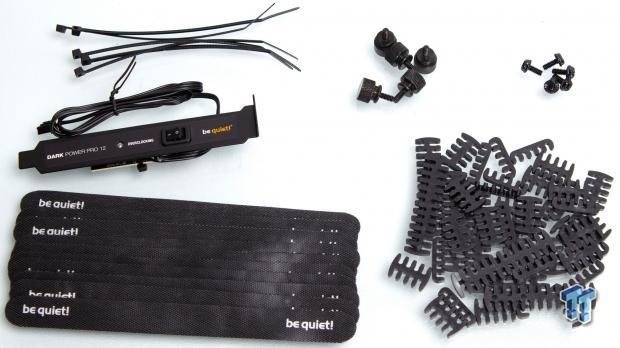 The array is quite full for a PSU, and I like that they include the cable combs since the PSU cables are individually sleeved with a braided cloth style covering. 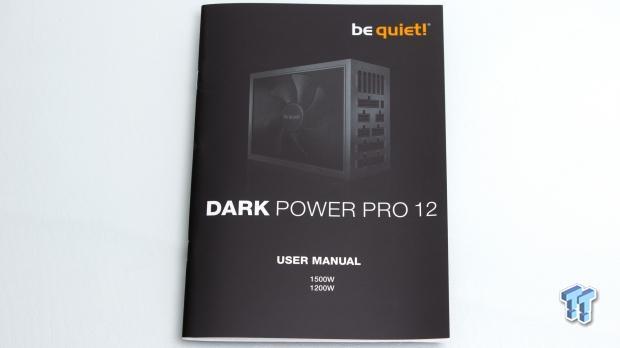 The last part of the accessories for the Dark Power Pro 12 is the manual, which covers the 1200W and 1500W models. The manual is multi-language and covers the safety, cautions, and basics of the PSU. 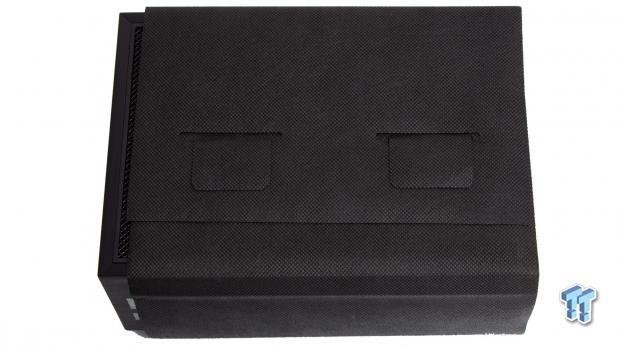 Here we have the PSU chassis itself, which comes in a fabric style sleeve. 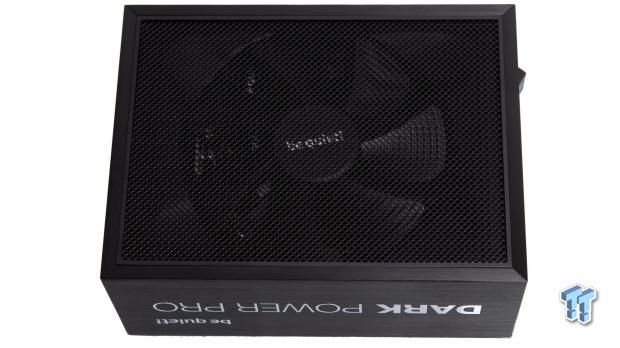 Pulling the sleeve and we get a clear view of the PSU fan area, which is a full mesh panel with the fan recessed below. The fan is a be quiet! Silent Wings 3 model at 135mm. It is a 6-pole fan with a maximum RPM of 2600RPM and 31.5dBA, although I don't think you could hit a scenario where you will see this speed or noise level.

Flipping the PSU a quarter turn, we see that the spec label is printed on the side. Here is also where we see the serial number label along with several certifications and regulatory icons. Here we see that the break down of the amperages per rail is displayed, and well, this PSU can carry a pretty heavy load. 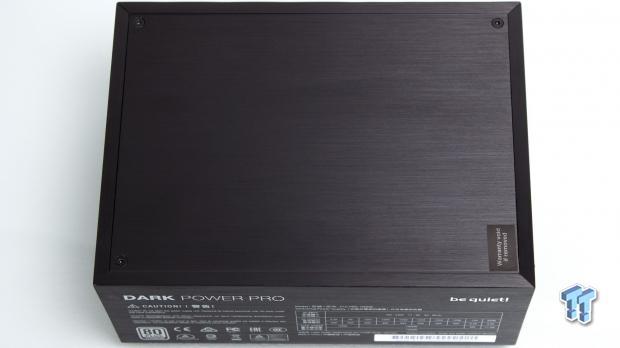 Flipping the PSU again, and we find the flat side, which is blank brushed metal. This is normally where we would have the PSU label, but in this case, be quiet! left this area blank. 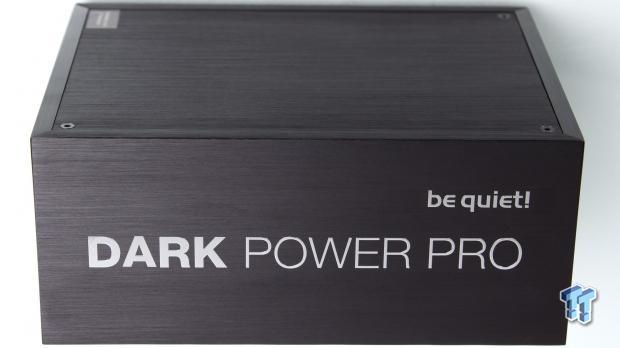 The last flip on this axis shows the side you will likely see if you have no PSU shroud or a windowed one. This is where be quiet! applied metallic lettering for the brand and model of PSU. 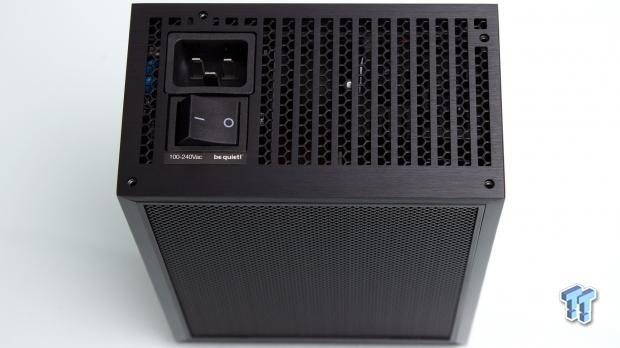 Here is the input side of the Dark Power Pro 12 PSU, which has an aluminum exterior shell, but you can see the standard steel chassis grating behind the aesthetic piece. This is likely to keep large objects from reaching inside and shorting the high-power internal components. 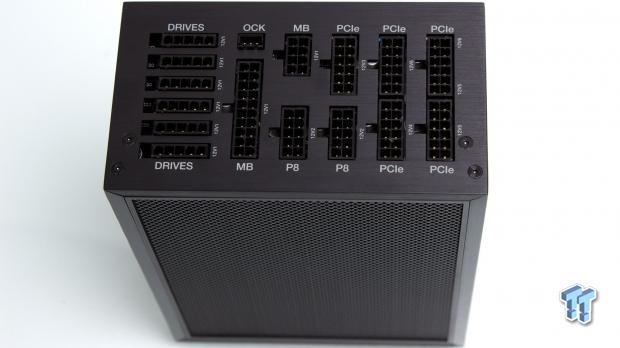 Lastly, we take a peek at the modular connector side of the PSU. Here we see all of the connectivity you should need, and be quiet! even labels every output so you can balance the load to different rails if you are loading up enough components to really push the PSU capabilities.

Now that we have seen everything about the new Dark Power Pro 12, I say it's about time we wire it up to our test bench and see how it handles a real-world load. 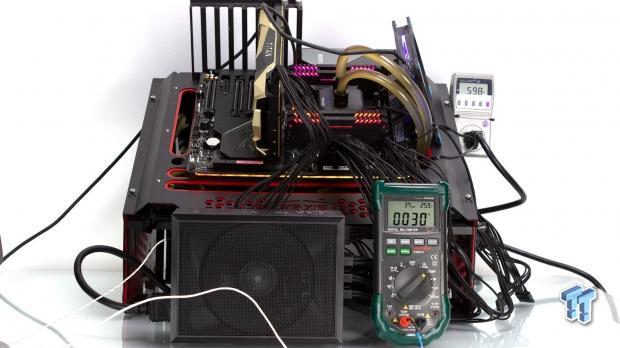 The first thing I did was load up the rig with a single workstation-class GPU, a TITAN V. We saw power draw up to around 590 - 620W as load varied slightly based on workload fluctuation and loading. At this point, the only noise observed was the blower fan on the GPU. 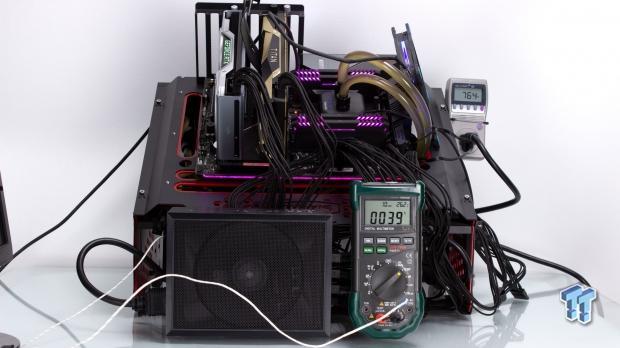 Loading up a second GPU, an RTX 2080 SUPER, and we see power draw climb to 750 -780W with PSU internal temp hovering in the 40C range during the few hours of testing this wattage. The only noise observed once again is the fans on the GPUs as they, along with the CPU, is under heavy, consistent loading. 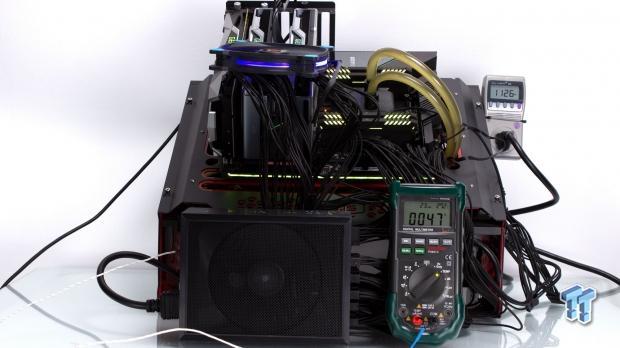 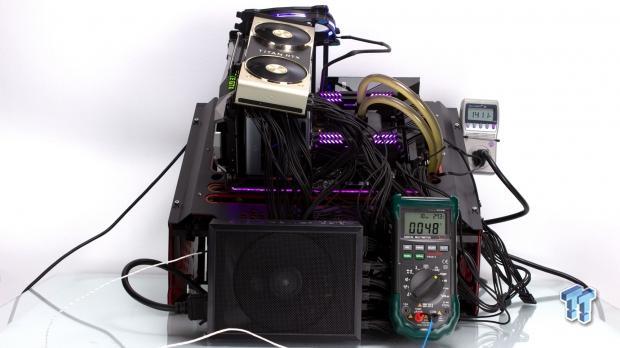 We wanted more from it, so we opted for the less savory way of fitting another GPU in place, which is a ribbon cable and the card resting on top of the others. The addition of the TITAN RTX does push us over the 1400W mark, and we hover around 1405 - 1460W fully loaded for several hours. The PSU now sees the thermals reaching 48-49C, staying mostly in the 48C range, and the fan is admittedly still inaudible. The PSU remained completely stable, not having a single error in any workload we threw at it.

I would love to push the PSU further, but unfortunately, I am out of slots to use, and I think this is more than a far beating on this PSU as it represents a pretty extreme setup even for a workstation application. With that, let's pull this one into the pits and wrap things up with some final thoughts.

When be quiet! first offered their new PSU, I will admit I did not know a 1500W unit would show up on my doorstep. Needless to say, the overall unit has a quality fit and finish with the brushed exterior and braided individually sleeved cables. The performance testing showed no concerns and handled the larges load we could apply to it.

Thermals: The Dark Power Pro 12 1500W took every bit of the 1400W+ load we threw at it and didn't even break a sweat with internals staying under 50C with ease.

Noise: The Silent Wings 3 135mm fan, even under heavy load, was never audible, and when it did ramp up, it was not something I could hear even close to as loud as the render cards we had loaded up.

Value: The price point of the Dark Power Pro 12 series places it in a competitive space if that term can be applied to such an asking price. But at the end of the day, it offers a competitive product when placed on the same playing field as comparable models.

N/A: I tried to find something not to like here, but I simply could not. The price is high, but for what it is, it matches the market. The fit and finish are excellent. The performance is good.

I never want to buy or recommend a PSU that is in the $500+ range, but here we are. If you have a workload/workstation that can use this much power, then the Dark Power Pro 12 could be right for you. If you are an XOC enthusiast, then this PSU may be the answer to your needs. For a regular everyday gaming rig,m I would recommend checking out some of the other be quiet! PSU series that would be more applicable for your use case, like the Straight Power series.

The Dark Power Pro 12 1500W is a massively capable PSU with an equally sizeable price tag. However, if you are in the market for and have a system in need of such power levels this unit is tough to beat.