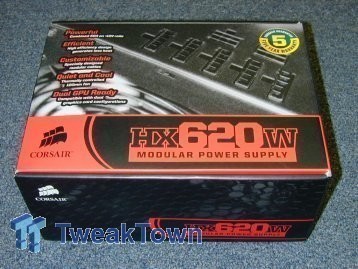 When you hear the name "Corsair", the first thing you generally think of is memory. Whether you're looking for normal everyday RAM or high-end enthusiast modules, Corsair means memory... until now.

Enter Corsair in the power supply market. They have put together a product that takes a lot of the recent innovations in the market and puts them together in a power supply that they are claiming has the enthusiast in mind. With so many companies flooding the market with this type of item, it will be interesting to see what the folks at Corsair have in store for us that will make their product stand above the rest.

So kick your heels up for a bit as we take a look at the latest offering from Corsair. We'll cover the features it has as well as its levels of performance to see if they can do for power what they have done for memory. 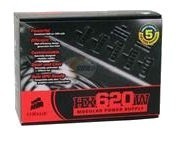 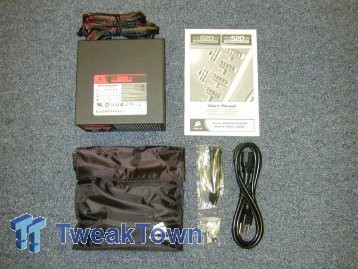 All right then; we're through the box and into the goodies. Inside you get the power supply itself (a very good start), a small manual, a new power cord, mounting screws, a small baggie containing some zip ties, and a nylon bag. 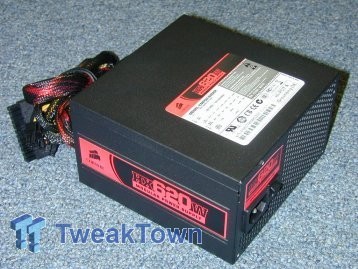 Starting off with the power supply, we see a flat black colored unit that is very much "industry standard" as far as size is concerned. It is not one of those longer models that we have been seeing, so should pose no difficulties in smaller ATX enclosures. Since we are beginning our tale with the main unit, I guess it is time to dig into some of those features I was talking about earlier.

To begin with, the 620HX, as the name implies, is a 620-watt power supply. With the growing power needs of modern systems, this will fit right into the current trend of having more than enough juice to make everything work. The 620HX also utilizes Active PFC (Power Factor Correction) to help with the electricity bills. As we will discuss in a moment, it is a modular design allowing you to use just the cables you need. This is great for reducing cable clutter inside the enclosure. After all, the fewer cables you have to try to hide, the better! It is compatible with ATX12V v2.2 and EPS12V v2.91 and is backwards compatible so it can handle pretty much any system from the first ATX and on.

As far as what this thing can do, it allows power draws of 24A on the 3.3v rail, 30A on the 5v rail, and a whopping 50A on the 12v rail. This model uses three 12v rails to keep everything under control, but a new feature that I like is the automatic adjustments that take place in the event you stress out one of those 12v rails. You see, each rail is rated at 18A with a 50A total draw allotted to the 12v rail as a whole. If you happen to attach too many components to one of those rails, the PSU automatically senses this additional power requirement and sends power from another 12v to supplement your needs. Are we finally seeing a power supply that can handle a peltier cooling solution without the need of an external power source? Could be. 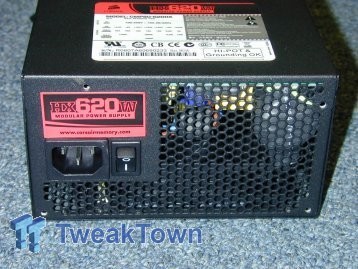 The external face of the 620HX shows a very minimalist design. You have a port for the main power cable and an On/Off toggle switch. There is an internal sensor that detects 120v or 240v current and automatically adjusts the PSU to work properly. 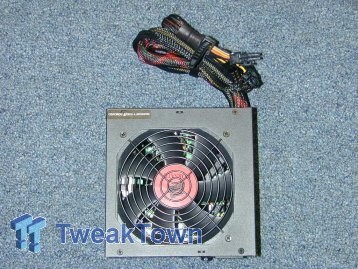 Flipping the unit over shows us the cooling portion of the device. Like most power supplies on the market, it has a single fan and is controlled by an internal thermal sensor and automatically adjusts the fan speed accordingly. The fan used is a large 120mm variety and I was not able to hear it over the case fans during testing, so it should not be a noise issue for most users. 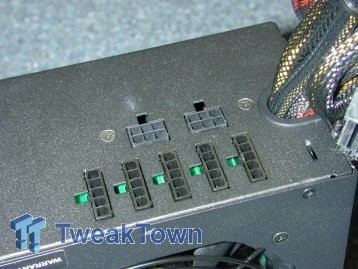 Rolling it over again brings us to the back portion of the device. As I mentioned earlier, it is a modular power supply, so you only need to connect the cabling necessary for your system. The connection ports are very clean and the cables snapped in with a firm CLICK so there was no chance of missing the fact that it is firmly seated. All ports are the same with the exception of the PCI-E ports. 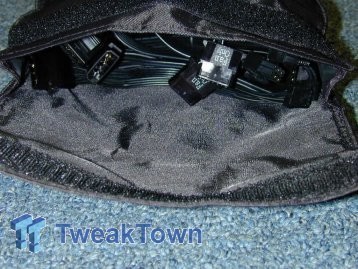 Speaking of those cabling choices, it is time to take a peek into that nylon bag that was shown before. Yes, that is the storage bag for all cabling of this unit. This comes in handy since it allows you to easily store the cables you aren't using right now, but may need in the future when you upgrade. Let's take a closer look and see what we have to work with. 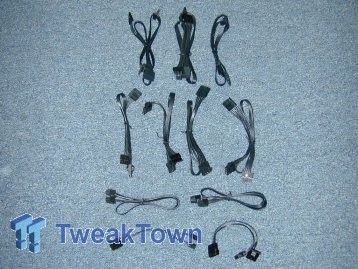 Talk about flexibility! Besides the two PCI-E ports, we only have five spaces for cabling to be installed, but we have seven potential candidates. Corsair realizes that you won't need all of the cables it provides, but this setup allows you to have a great deal of choice in how you set up your system. Sorting through the mess of cables we end up with a total of 10 Molex connectors, 8 SATA connectors, and 2 PCI-E ports. Also included are a Molex splitter that creates two FDD connectors and a Molex splitter that creates two "FAN ONLY" Molex connectors. Overall a very nice layout.

One item of note I must make here is in reference to the FDD splitter. This splitter could have been (and really should have been) a little longer in the length department. For those using certain high-end motherboards (like my DFI nF4 Ultra), a single FDD connector is required to be attached to the motherboard. This power header is located about halfway across the motherboard, so this causes a problem in the event you want to also use a 3.5" floppy drive. The cable length may be prohibitive in a large case. If you don't have this type of motherboard or you don't use internal floppy drives anymore, then you will have no issues at all. All other cables were of a very acceptable length and produced no problems during installation. 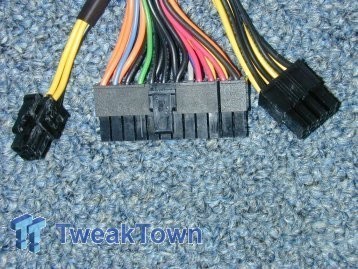 The final stop on our tour of this power supply is the primary power couplings. So as to handle all the current and most past boards still in use, you have a 20+4 pin main power connector, and both 4-pin and 8-pin supplemental power couplings. As long as your system is not AT, you should be set here.

I've been playing with power supplies for quite a while now and I guess in my old age, I like to sometimes make things interesting. My normal method of testing a PSU was to get the system up and running, get a burning session on a CD-RW running in the background, then starting up something along the lines of Quake 4 and run a long-winded demo. Once everything is cranked up, I'll measure the voltage levels along the power rails to see how close they remain to specifications. The thought behind this method of testing is to see if the power supply can maintain acceptable power levels while under stress.

I have tested many power supplies and there has always been a noticeable difference between the rails between idle and load states... until now. This is the first unit tested to date that allows only a .01v drop along the rails between the two states. What this means to you is that you can expect to receive a near perfect supply of power along all rails regardless of stress conditions. Yes, you can probably daisy-chain a couple of hundred fans and eventually cripple this thing, but you could do that to any power supply. This minimal effect between states is amazing!

What can I say but WOW! When I first received this product for testing, I read through the feature list and it reads like a dream sheet. Sure Corsair said it was for enthusiasts, but so many other companies make the same claims. After taking some time to get to know this unit, however, I can only say that they were right!

The modular design isn't a new concept, but I think that the folks at Corsair actually listened to reviewers and did everything they could to make certain they did it right. The great flexibility offered with the included cabling shows they know that every machine is different, but that they can make sure their power supply is right for you. Another huge plus is the automatic adjustment of power levels across the 12v rail. If you happen to be running an older Athlon XP system, this won't have a whole lot of merit for you, but anything running Athlon 64 and newer (including Intel rigs) needs a solid 12v rail to maximize stability.

On the flip side of the coin, the only gripe I could come up with was the noted FDD splitter being a little short if you happen to be running a DFI mainboard AND a floppy drive. Otherwise, this power supply is something that dreams are made of.

As far as price is concerned, this unit does not come cheap. Of course, power supplies quit being cheap when we discovered a need for something more than a generic steel box with wires coming out of it. This beast will set you back in the neighborhood of US$180, but then if you are an enthusiast, you already know that your system needs the best you can get.

Bottom line... When it comes to power supplies, one thing is for certain; you should always get the best you can afford. When it comes to that term BEST, make sure to add the Corsair 620HX to your short list of potential candidates. With near perfect power across all rails and a feature list that is extraordinary, you simply cannot go wrong.

Rating - 9.5 out of 10 and TweakTown's MUST HAVE Editor's Choice Award!