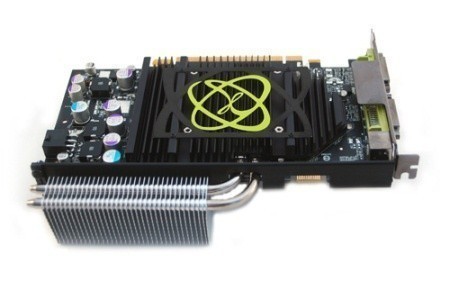 Another new graphics card from the nVidia has been released onto shop shelves today and again representing the green corner is XFX with the brand new GeForce 7950GT. As if there wasn't already enough cards out there on the market to confuse us, nVidia thought they would turn around and sneak another one in there for us all.

While at first due to the naming scheme you might think that the card is a dual core solution, much like the GeForce 7950GX2, it certainly is not that. It is designed to sit above the older GeForce 7900GT as far as performance goes (which of course means it's faster then the new 7900GS that was released only last week) and as far as pricing goes, it's going up directly against ATI's new Radeon X1900XT 256MB. It comes with 512MB worth of fast GDDR-3 compared to just 256MB on the 7900GT and has its core and memory clock speeds have increased quite a healthy margin.

We will be following our normal setup with having a look at what the card has to offer and then going into our benchmark run to see just where the card sits in this very competitive high-end battle which we are experiencing at the moment.

Grab a coffee as we examine nVidia's latest GPU in this world exclusive review of the XFX GeForce 7950GT Extreme!

Using the larger box that we saw the 7950GX2 use we have a pretty standard XFX layout happening.

Big bad Mr. World is on the front of the box with a host of stickers mentioning some of the key features of the card. We can see clearly that we are dealing with the Extreme model with a 570MHz core clock speed.

It supports all our normal array of technology like SLI, HDTV and HDCP. We can also see in the top right corner that a copy of Ghost Recon: Advanced Warfighter is included and the bottom left corner also shows us a little sticker stating that this is a silent pipe card. 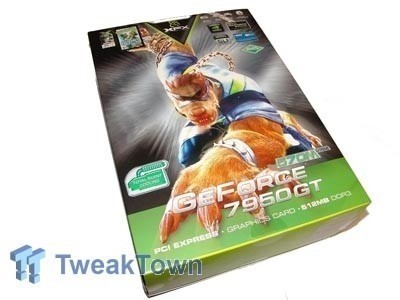 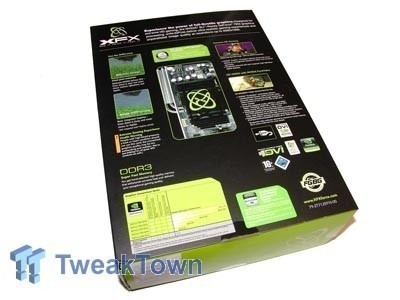 Turning the box over we have a picture of some of the card along with all our extended specifications which also go on to explain how some of them work. Overall a pretty nice box that gives us a good run down of what to expect once we open it up. 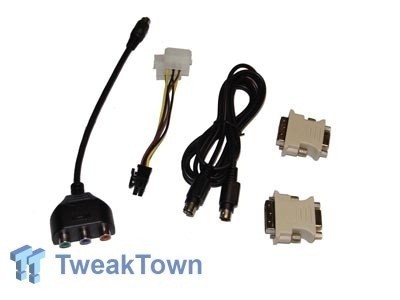 Once we get inside we have our normal array of goodies - some exciting others not so exciting. Cable wise we have a couple DVI to VGA connectors, S-Video cable along with a Component out adapter for making use of HDTV and of course a couple Molex to PCI Express connector for those that don't have a power supply with a native PCI Express connector. 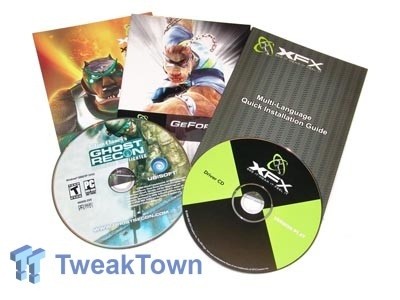 Paperwork wise there is nothing really all that exciting about it, a quick installation guide, little booklet on there X Gear and a user manual. We also get a driver CD and of course like we mentioned on the front of the box a copy of Ghost Recon: Advanced War Fighter which is a nice addition to the package.

The Card and Overclocking

Clawing our way through to the card we found ourselves with something we haven't seen from XFX before - a high-end overclocked silent graphics card.

Looking straight at the card we have a big heatsink that covers the front of the card and two pipes that shoot out the top where the heat dissipates. The generally quality of the heatsink overall seems fairly good and looks like its going to cool the card sufficiently enough. 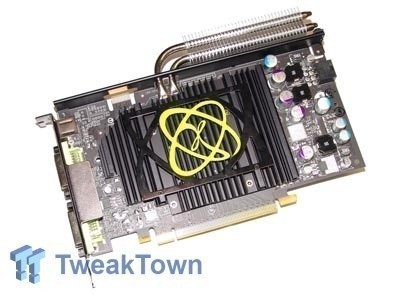 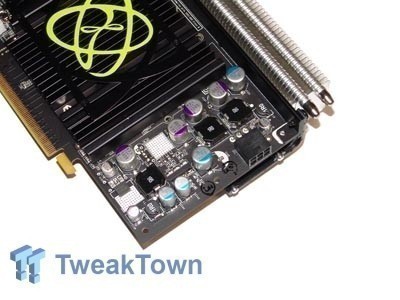 Like the GeForce 7900GS, the card does require a PCI Express power connector since the motherboard cannot provide enough juice. If you don't have one it's all good as there is a converter included in the package as we saw on the previous page. 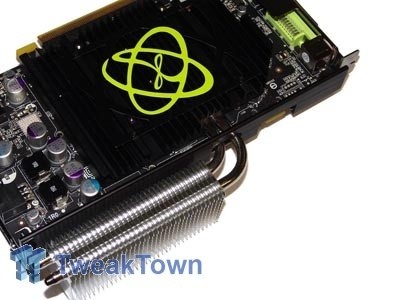 The top of our card has a bracket to help prevent the card being bent in shipping and causing the SLI connector across the top to crack in any way. Not only does it look good, it actually is quite useful. 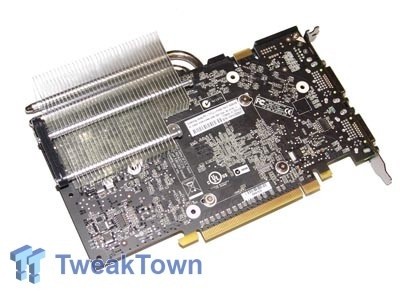 Turning the card over we have the big tail end of the Heat Pipe where all the hot air dissipates. It's your standard aluminum fin setup and while the card did get warm while running, in our opinion it isn't anything that would alarm you. We can also see the four screws where the heatsink is screwed on evenly. 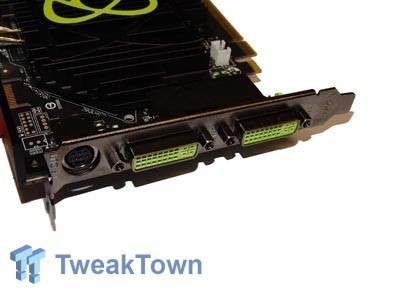 Finally moving over to the I/O side of things we have a couple DVI ports (Dual Link) and an S-Video port to make use of the TV Out functionality that is on offer from the card. If you don't have a DVI monitor there is nothing to worry about as we saw that XFX have included two DVI to VGA connectors so you can get the card up and running straight away.

Out of the box the XFX graphics card is already overclocked.

Using Coolbits and the "Detect Optimum Frequencies" feature we were able to then achieve a further 11MHz on the core bringing it to 581MHz and the memory was also increased to 1522MHz DDR.

While these aren't huge overclocks, we will see what happens and how it affects the scores on the following pages.


Running the same benchmark suite as we have over the past few reviews we continue to have a look at all the main technology that is included in our games today like HDR, Direct3D, OpenGL, AA and AF.

Throwing both the new GeForce 7900GS in and the 7900GT we can see where they sit with the 7950GT. We then ran our overclocked 7950GT through the whole suite to see where it sits.

Unfortunately we were only sent a single 7950GT, so we could not provide you with SLI results at this stage.

As we expected we have our reverse stairway effect. The 7900GT sits clearly between the two new cards from nVidia. The overclock gives us a nice little bump at both resolutions as well.

Moving to the more intensive 3DMark06 we can see that the same results with again the overclocking giving us a nice little increase.

While the jump in our normal Lost Coast benchmarks are pretty steady when we move to the HDR tests we can see that the 7900GS sits a bit further back at both resolutions. Mind you none of the cards struggle to offer a playable gaming experience.

The performance at 1024 x 769 sees the 7900GT and 7950GT sit very close together. It is not till we move to the higher resolution where more strain is placed on the card that it clearly takes the lead again.

F.E.A.R. at the lower resolution sees the 7950GT have a good jump on the 7900GT and 7900GS. While they are more even at the average, it is interesting to see the large difference at the minimum which is very important.

When we move to our HQ tests we see again that the 7900GS lags behind.

Turning on the AA in Lost Coast we see that the 7950GT overclocked offers a playable setup while the others would be slightly arguable. Some would say you want to see an average of 50 others would say 30.

nVidia's brand spanking new GeForce 7950GT is a good graphics card - it's really what the older 7900GT should have been in the first place. A 512MB good performing but not ultra expensive graphics card!

The 7950GT is going to appeal to a few people. Those that want a 512MB graphics card and those people who are willing to spend an extra few dollars to venture into something a bit faster then the 7900GT but not break the bank like the 7900GTX.

While the overclocking wasn't as pleasing as the 7900GS, it will be interesting if this is due to the heat pipe technology that XFX have opted to use instead of a standard fan/cooler combination. The clock speeds are already quite high and fairly impressive, so that may be all we can expect out of the 7950GT - we will test more cards soon and find out and report back to you.

It was good to see that XFX have also chosen to include a full version copy of Ghost Recon: Advanced Warfare which is a fantastic game and quite taxing on the system - so you should be able to get some real use out of your new graphics card out of the box.

All in all the new nVidia GeForce 7950GT is a good graphics card but it seems to be a bit of a stop gap measure. While ATI have released a new card (X1900XT 256MB) that is slightly faster, nVidia are saying we are happy with our top-end but want to bring some more competitive pricing in the high-end market - hence the release of the 7900GS and 7950GT.