Low-cost SSDs are hotter than ever and offer significant value in a market that's rightfully flooded with solutions from an innumerable number of vendors. Silicon Power has made a pretty solid name for themselves over the years, offering budget and high-end solutions in SATA and NVMe market spaces. The P34A60 is their latest budget solution, and today we have it in house for review.

The P34A60 is the little brother to the E12-powered A80 from earlier in the year. Instead of 64 layer BiCS3 from Toshiba, the SP A60 goes with second-generation 64 layer TLC from Micron and substitutes the Phison E12 found in the A80 for the SMI 2263XT. This makes for a solid budget solution that should be able to make modest performance while keeping overall costs down.

This solution supports several capacity options, including 256GB, 512GB, along with 1TB and 2TB. The interface for this solution is PCIe 3.0 x4 and takes advantage of the m.2 "M" key slot. Features include support for the NVMe 1.3 specification and HMB technology, which aids DRAMless SSDs by allocating system memory to the drive for optimum performance.

Packaging offers capacity and warranty on the left side with a window to the drive on the right.

The back goes into more detail with a full specification list.

Unboxing, we have the drive in its 2280 form factor, again "M" keyed for m.2 slots. Model and capacity information can be found on the sticker.

Into our game load scenario with FF Stormblood, the A60 does quite well, outperforming most drives and ending up on par with the SBXe.

Finishing up with Price/Performance, the A60 takes the cake with solid pricing and ample 4KQ1 performance.

Just last month, we crowned the Patriot Scorch our best drive for users on a budget and along comes the P34A60 to upend that result, producing even better 4KQ1 results at a lower price point. Build quality and reliability while not fully tested here today show no real concerns after hours of testing but will inevitably show up as these drives enter the market and end-users put them to use.

The performance of this drive is ample for simple desktop builds and even gaming machines on a budget, and the capacity options are there with 256GB through 2TB covered by the P34A60. For users that intend to move large files this drive, while not the quickest on the market, it did provide 2070 MB/s read and 1682 MB/s write in our testing.

As mentioned briefly, pricing is on point for the 512GB P34A60 at $56.99. Adding to this, in our testing, this drive offered top-tier Q1 write performance, rivaling the large players in the market, giving it top marks in our charts.

I'm not sure you will find a better drive at this price point, especially for users on a budget. 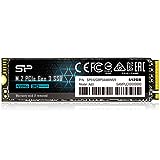 Given its price and performance, the Silicon Power P34A60 m.2 SSD may be the best budget drive on the market for holiday 2019.