The Elgato Stream Deck XL can not only solve your boring setup look, but it can also solve many different types of problems that you might be having while streaming. The buttons are smooth and slick, easy to press, easily customizable, feel nice under your finger and are a no-brainer when it comes to linking programs/websites through the software. Elgato has done a fantastic job and keeping everything uniform and really compact, while also giving buyers an expansive selection of keys to choose from.

The XL variant is the most expensive variant available from Elgato, and while the 32 programmable keys are certainly awesome, the $249 - $300 price tag from select retailers isn't so much. At the end of the day, buyers are just getting programmable keys that have LCD displays on them. While the deck is undoubtedly a great companion to have on your desk, budget streamers or users in general might not be able to see the utility in the product due to its substantial price. Instead, consumers would most likely opt out for one of the cheaper variants.

All in all, the Elgato Stream Deck XL is fantastic product and can really bring your desk appearance all together just that much more, while also providing some time saving efficiency to some mundane tasks. Elgato has done a fantastic job with this variant, and like I previously mentioned above; its slick, looks great almost anywhere on your desk and is extremely easy to use. If I was to critique this product, I would say that most users and even streamers won't be using all 32 programmable keys. Even after playing around with the deck for quite some time I didn't find myself using all the keys provided, as most of what I needed was already bound to keyboard anyway.

If you believe that you need some programmable keys to better your stream while also making your desk look awesome at the same time, look no further than Elgato's Stream Deck XL. Its more than just programmable keys for your choosing, it's a desks best companion for a future stream. 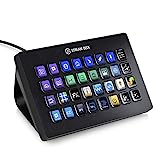