FSP is probably one of the lesser known named to many users as they tend to see those like Corsair, EVGA, and others before knowing who FSP even is. However, it is worth noting that many manufacturers or companies use FSP. Those companies use FSPs platform as an OEM for their PSU models. This means that FSP has chops in many cases to create some excellent products.

Today we have the Hydro G series, which is odd since I first saw the FSP hydro series with the Hydro PTM models. Those models had an integrated Bitspower water block to cool some components, bit now the Hydro name seems to be sticking around but sans liquid cooling parts.

Some of the key features FSP promotes for the Hydro G would be:

The FSP Hydro G PRO unit has the necessary suite of certifications along with a lot of useful features to ensure users have a better experience. The conformal coating to allow operation in up to 95% RH is fantastic, as that means that there is less worry for small liquid issues, although I would not recommend pouring fluid of any type into your PSU to test this claim. Newest ATX compliance is also useful as it ensures that all of the new platform power features work as expected, including extremely deep sleep and almost 0W sleep loads. As previously mentioned, the PSU we have today is a 1000W unit in the Hydro G PRO lineup. The model number, if you look at the FSP website, is HG2-1000, while the label on the box shows a P/N of PPA10A2401, so with that, I listed both. However, it seems that HG2-1000 is the most applicable with a quick Google search. The PSU measures square with a 150mm length and width, while the height is standard for ATX PSUs at 86mm. This is almost the smallest you can realistically get a higher-end PSU which will be 140mm length. This means potential space savings where you can tuck more cables in front of the PSU as needed.

The FSP Hydro G PRO 1000W has a current running price of $165.99 at Amazon, and this is at the lower-end of 1000W pricing. Gold units the Hydro G PRO will compete with would be Seasonic FOCUS Plus, Antec HCG1000 Extreme, and the Phanteks Revolt Pro at a similar price point. I could not in good conscience include the EVGA 1000GQ in the listing due to it being semi-modular. The fully modular SuperNOVA edition is about $20 - $25 more expensive, depending on where you shop it.

It will be interesting to see how the FSP Hydro G PRO performs under load in our real-world test rig. We will see under real workloads, how much pain the FSP can handle. 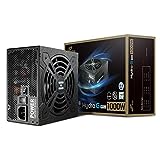